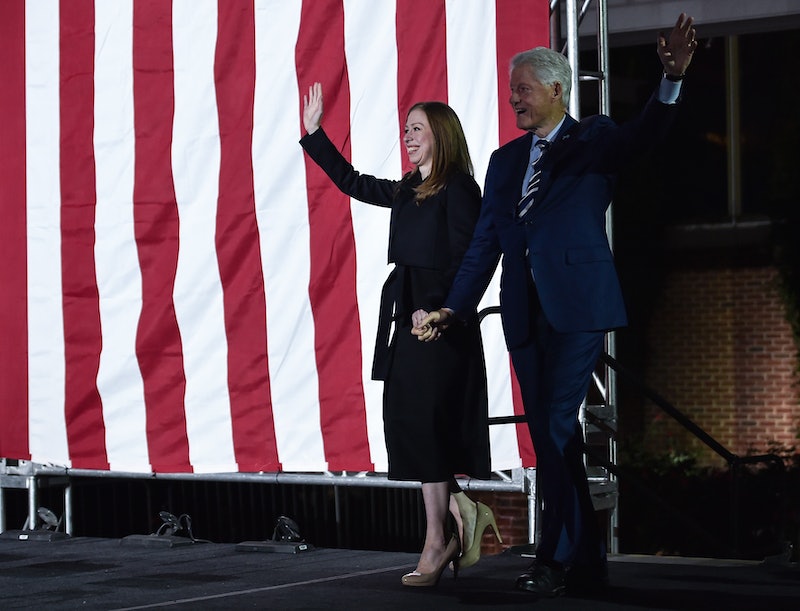 As a growing number of Democratic lawmakers announce that they will be boycotting the inauguration of Donald Trump, questions continue to arise as to who exactly will be in attendance on Jan. 20. It has been confirmed that both Hillary and Bill Clinton will be making the trip to Washington, but will Chelsea Clinton be at the inauguration alongside her parents? As per tradition, Trump’s children will witness their father be sworn-in as 45th president of the United States, but there is no clear precedent concerning the attendance of the children of the opponent. (Bustle has reached out to Clinton's team for comment, but had not received a response by press time.)

After a tempestuous and bitter election resulting in Clinton claiming the majority of the popular vote but falling behind in electoral votes, it was hotly debated as to whether the Democratic nominee would agree to attend. Rumors subsided when Yashar Ali of New York Magazine reported in early January that sources close to the former secretary of State confirmed her plans. “She and President Clinton, the sources said, decided to do so out of a sense of duty and respect for the American democratic process,” wrote Ali. Former presidents George W. Bush and Jimmy Carter have also confirmed their attendance to witness a peaceful transition of power. Chelsea Clinton has yet to make a statement concerning the upcoming event.

While Chelsea was a familiar presence on the campaign trail in 2016, she has stayed largely out of the public eye since November's results. She currently lives in New York City, where she continues to work as vice chair of the Clinton Foundation and teach at Columbia University’s Mailman School of Public Health. She married investment banker Marc Mezvinsky in 2010; they have two children.

At 36 years old, Chelsea is most assuredly her own person, so it cannot be assumed that she will make the trip with her parents (36 is obviously long past the time when your parents control your schedule for you). The caring former first daughter has continually supported her mother, though, traveling all over the country while pregnant with her second child to speak on behalf of her family (indeed, she has taken on visible roles during both of Hillary Clinton's presidential bids). However, with the election over, little is known as to whether Chelsea will yet again hit the road with her parents come Friday. Her Facebook and social media pages have remained mum on the subject.

It should be noted that prior to the election, the Trump and Clinton families were on seemingly good terms. A close friendship between Chelsea Clinton and Ivanka Trump has been documented by the media over the years, though they are rarely publicly seen together. According to Inside Edition, the two have committed to remaining friends after the difficult election.

Whether or not Chelsea will attend the inauguration is still up in the air, but her actions do not seem to betray a political message one way or the other.