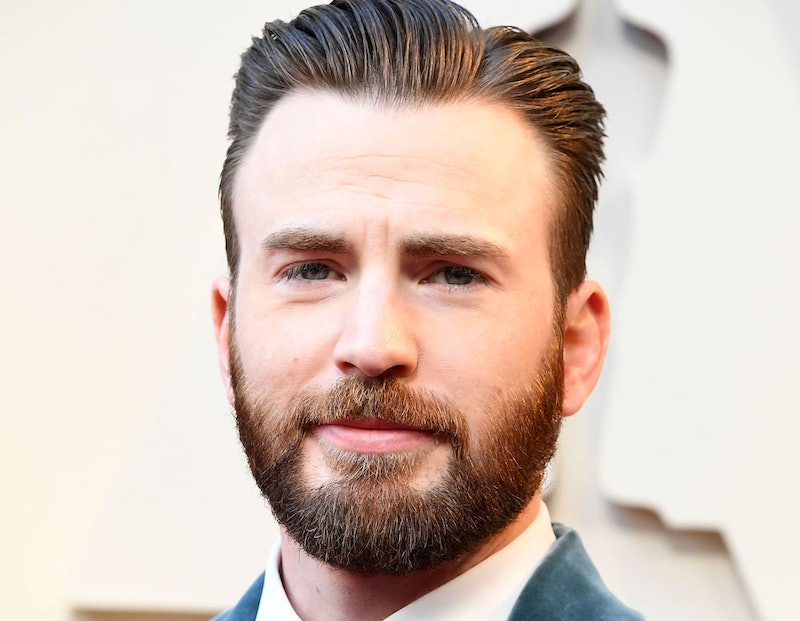 Rian Johnson and a cream-colored cable-knit sweater all but cemented Chris Evans’ attendance at the 2020 Oscars on Sunday, Feb. 9. Evans' films Knives Out and Avengers: Endgame received a Best Original Screenplay and Best Visual Effects nomination, respectively, so it’s safe to presume that Evans — and the rest of the Knives Out and Avengers gang — will be on hand to celebrate the noms at the Dolby Theatre in Los Angeles.

Knives Out follows an inquisitive detective (Daniel Craig) as he investigates an eccentric family on the heels of the death of their patriarch, a renowned crime novelist named Harlan Thrombey. In the classic whodunit thriller, Evans plays the spoiled trust-fund grandson of the late crime novelist. The cream-colored, cable-knit sweater that Evans’ character wears in the film quickly became a viral fixture among movie-goers upon its release.

While the infamous sweater is unlikely to make an appearance at the Oscars this year, the same can’t be said for Evans. After all, he attended the Golden Globe Awards in Beverly Hills last month to celebrate Knives Out’s nominations in the Best Motion Picture - Musical or Comedy, Best Actor, and Best Actress categories and to present alongside his Avengers co-star Scarlett Johansson.

Evans isn’t on the roster of Oscar presenters this year, but there should be no shortage of viral moments to look out for. Last year, Evans went viral when he assisted Regina King onto the stage to claim the first award of the night for her role in If Beale Street Could Talk. In the clip that took Twitter by storm, King’s dress gets caught up in her heels, and, in true Captain America form, Evans leads the Watchmen star onto stage. One Twitter user wrote at the time, “Chris Evans helping Regina King to the stage as she wins best supporting actress is too much for me to handle.” Another user thanked Evans for his chivalry.

At the ceremony on Sunday, Knives Out will go up against Marriage Story (Noah Baumbach), 1917 (Sam Mendes), Once Upon a Time in Hollywood (Quentin Tarantino), and Parasite (Bong Joon-ho) in the Best Original Screenplay category. Tune into the Oscars on Sunday, Feb. 9 on ABC at 5 p.m. PST to celebrate the nominees — or, most importantly, to keep an eye out for any potential viral Chris Evans moments.

More like this
14 Women To Watch This Oscar Season
By Marina Watts
Everything You Need To Know About The 'Knives Out' Sequel
By Bustle Editors
9 Movies & TV Shows That Prove Stanley Tucci Elevates Everything He’s In
By Jake Viswanath and Radhika Menon
At 14, Jurnee Smollett Was Taking Meetings With Missy Elliot & Lauryn Hill
By Chloe Foussianes
Get Even More From Bustle — Sign Up For The Newsletter