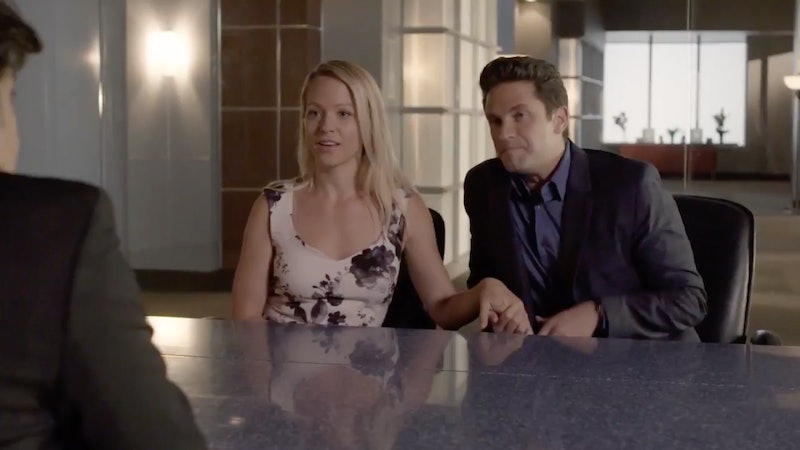 The thought of two babies getting switched at birth may be on the list of worries for expectant parents, no matter how probable the scenario really is. Though very unlikely, you do hear real stories of babies being switched at birth every so often. You can Google it or check out a wonderful episode of This American Life entitled "Switched At Birth" if you do want to hear one such true tale. So it's possible that a movie about to premiere on Lifetime presenting a story on this subject, Cradle Swapping, could be based on a true story, too.

Cradle Swapping, which premieres on Sunday, May 7 at 8 p.m. ET on Lifetime, follows new parents Alicia (Amanda Clayton) and Ray (Brandon Barash) as they welcome their daughter, Hannah, into the world. Shortly after Hannah's birth, the baby begins to show signs of drug withdrawal, even though Alicia did not drink alcohol or take drugs during her pregnancy. That, coupled with the fact that Hannah doesn't look anything like Alicia or Ray, prompts the parents to take a DNA test, which shows that she is not really their baby. Alicia and Ray discover that someone has swapped their daughter with another baby so that the mother could earn money by selling a healthy child to a high-end adoption ring. Alicia and Ray then decide to take matters into their own hands to track their real daughter down.

Neither the synopsis for the movie on Lifetime's website or the one featured on the website of MarVista Entertainment, the production company behind Cradle Swapping, contains anything like the phrase "based on a true story." If a film was inspired by actual events, it usually tends to point that out in the synopsis or the materials about the movie. Since there's nothing like that as far as Cradle Swapping is concerned, it seems as though it is a fictional film.

But of course, just liked switched-at-birth stories, child trafficking and black-market adoptions like the one presented in Cradle Swapping are all too real around the world. You can read up on the topic extensively online, as well as research what many organizations are doing to try and put an end to child trafficking.

Of course, if you want a bit of an escape from reality and want to check out some more fictional switched-at-birth stories, those exist, too. Most of the time in these works, the drama not only comes from the fact that the babies were switched at birth but also because the families that they've been switched into lead vastly different lives.

For example, in the miniseries, Switched at Birth, which stars Melissa Gilbert and Rosanna Arquette as new mothers whose babies end up having their name tags mixed up in the hospital, one woman comes from a comfortable, upper middle class lifestyle, while the other is a free-spirited single mom just trying to get by. The same plot device appears in the Freeform TV series Switched at Birth, which aired its series finale in April after five seasons. In the show, one teen from a wealthy family discovers that she was switched at birth with another teen who is from a working class background and who is also deaf. The onetime long-running British musical Blood Brothers, which first premiered in 1983, is also a tale of two twin brothers being separated at birth when their working class mother, unable to afford raising two more babies, decides to give one of the boys to a well-off woman who is unable to get pregnant. The boys' different upbringings end up determining the course that each of their respective lives takes.

Clearly, Cradle Swapping has an intriguing concept. Here's hoping the film is as fascinating as it sounds.

More like this
Gerard Butler Insisted On Adding This Pivotal Scene To 'Plane'
By Catharina Cheung
Jemima Khan Used Her Own Life As Inspo For 'What’s Love Got To Do With It?'
By Darshita Goyal
The Plane Crash In 'Dear Edward' Is Based On A 2010 Tragedy
By Grace Wehniainen
Taylor Lautner Copped To Finding Jacob "A Little Annoying" In Twilight
By Stephanie Topacio Long
Get Even More From Bustle — Sign Up For The Newsletter
From hair trends to relationship advice, our daily newsletter has everything you need to sound like a person who’s on TikTok, even if you aren’t.