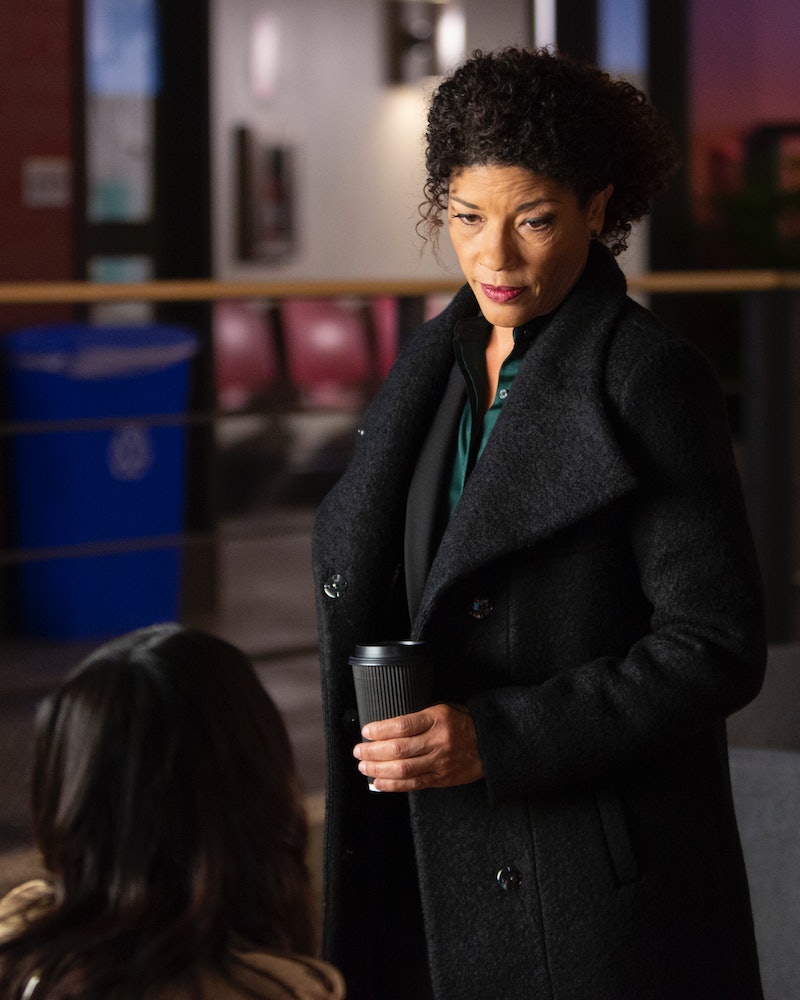 Pretty Little Liars may be over, but there's a new "A" in town on The Perfectionists. Or, at least, that's what the Perfectionists have decided to call Dana Booker, since she is being awfully A-like on the show. Ava, Caitlin, and Dylan all think they've been targeted by the former FBI agent because she thinks they killed Nolan. Right there, Dana is different from the A of PLL. She's not trying to pin Nolan's murder on them, she just genuinely thinks they did it and is trying everything she can to get the evidence she needs to put them away.

Fans don't know who killed Nolan, but it's being presented to viewers that it wasn't any of the three Perfectionists. To Dana, however, they look super guilty — especially since Nolan was blackmailing Dylan and Caitlin over their secrets. That gives them a motive to kill, for sure. The Perfectionists have been suspicious of Dana for a while, since she is using some pretty underhanded tactics to try to solve Nolan's murder. And Mona appeared to have proven that Dana was the one messing with them when she determined that Dana matched the gait-pattern from the person who snuck into Mona's apartment with Nolan's key card.

Does that make Dana "A" or just overzealous about her job? The actors themselves have their own Dana theories, and some of them cut Dana a little slack.

"I think Dana is onto something," Sydney Park, who plays Caitlin, recently told Bustle. "She's suspicious about someone for a reason. I think she's smart and that’s what is so alarming to the Perfectionists; she figures things out really fast. But I think people can underestimate her."

Eli Brown, who plays Dylan, also called Dana super smart. "She's wicked smart and sharp as a razor and very menacing, and I don’t think that she’s playing around either," he previously told Bustle. He added that he thinks Dana is trying to use whatever information she can find to turn the Perfectionists against each other. "She’s trying to use it as leverage to get one of us to rat," he said.

With that in mind, it makes sense that she would have been the one to put the threatening cupcakes in Mona's apartment. She's trying to turn this group against each other and get them to crack. But as Park said, she seems to be doing it for a reason — so maybe we shouldn't rule the Perfectionists out as suspects in Nolan's murder.

In any case, Dana may be "A" in the sense that she's messing with the Perfectionists and she has a potentially hidden agenda and she knows all of their secrets almost instantaneously. However, unlike the "A" of PLL fame, she's not operating in secret. She's been very upfront that she's going to take the Perfectionists down by any means necessary. In that sense, she seems like a problem for the lead characters, for sure, but not the ultimate problem. Park previously told Bustle that "there are a few As if you play close attention." Dana may be one of them, but there's someone else out there that did the murdering, and they're the Uber A of this series.

So, sure keep an eye on Dana. But don't stop looking everywhere else too.