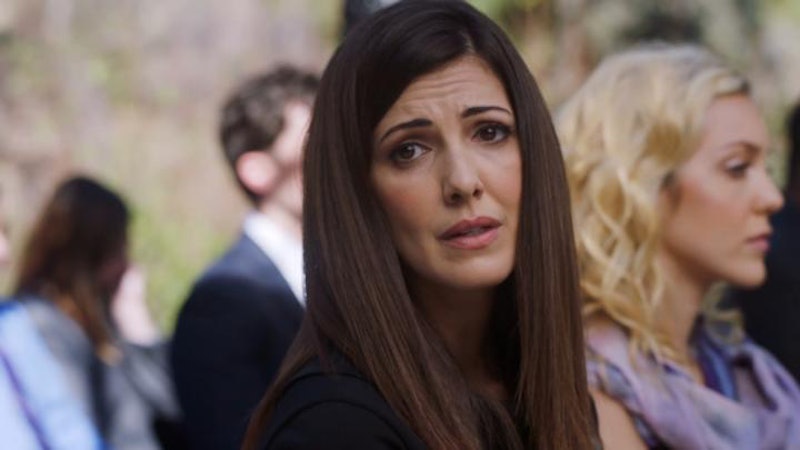 Are you a die-hard yogi? Do you meditate every day? Is your Instagram feed filled with wellness influencers sharing their new skin-brushing routines? If so, Lifetime's upcoming movie may not be for you — unless you forever want to associate your wellness routine with murder plots and treachery. Lifetime's Deadly Assistant is apparently "inspired by a true story," but exactly which story of a wellness guru being murdered they might be referring to, it's unclear.

Knowing how loosely the term "inspired by" binds filmmakers, it's entirely possible that only the film's key characters were based on reality — not the murder itself. Deadly Assistant stars Jeanette Sousa as Amanda, the sister to wellness guru Dr. Lauren Burch. When Lauren suddenly dies at the opening of her wellness center, Amanda becomes suspicious that she was murdered — and enlists Lauren's former protégé, Maya, to help her find out.

Fun fact about this movie: previously, it went by the title Poisonous Protege. You can draw your own conclusions about what that means for Maya's involvement, but it's certainly more of a hint to the movie's plot than the Lifetime preview, which vacillates between a guided meditation and the last 20 minutes of a horror movie. There are gongs, yoga poses, gags, knives, and wide-eyed glances — watch it enough times, and you may never relax in a yoga class again.

The trailer starts by setting the scene: they are, presumably, at Lauren's new wellness center, which all looks very Gwyneth Paltrow-approved. Things go sour quickly as we see some white powder being tapped into a glass (poison?), and Lauren collapsing a second later (poison). It escalates from there: a man (possibly Lauren's husband) throws something at a painting; it shatters. A blonde man in a tree looks searchingly at Amanda — then gets gagged, injected with something, and hurled off a hillside. Amanda wrestles with a door, then ends up bound and gagged on what looks like a massage table. Incense is burned, and the blade of an enormous knife is heated in the flames.

The extended synopsis adds that Lauren has a son who struggles with drug addiction, and is also dating Maya the protégé. When Lauren's death is confirmed as a poisoning, Amanda first blames Lauren's son — but in that pivotal painting-shattering scene, it seems like Lauren's husband talks her out of it. Slowly, the finger of blame turns to the poisonous protégé herself, at which point she... kidnaps Amanda and turns the wellness center into a scene from Saw V? Sounds about right.

The hook of a murderous assistant is always a compelling one — just ask the creators of 2016 Lifetime movie Killer Assistant. And while there haven't been any specific cases of wellness gurus murdered by their assistants lately (if ever), Lifetime's adaptation of the wellness scene in general is certainly taken from real life. It's a classic Lifetime twist to take a peaceful situation and add a psychotic killer. Wellness professionals always tend to come off as so calm and even-keeled, but who knows — maybe they're all just one CBD smoothie away from snapping. In the Lifetime universe, they definitely are.

More like this
Is 'The Woman King' Based On A True Story? The Female Agojie Warriors Did Exist
By Radhika Menon
Paul Mescal, Man Of Mystery
By Samantha Leach and Heather Hazzan
What’s New On Netflix: Ana De Armas’ 'Blonde' & A Nick Kroll Special
By Arya Roshanian
Here’s Everything Coming To & Leaving Netflix In October
By Jake Viswanath
Get Even More From Bustle — Sign Up For The Newsletter