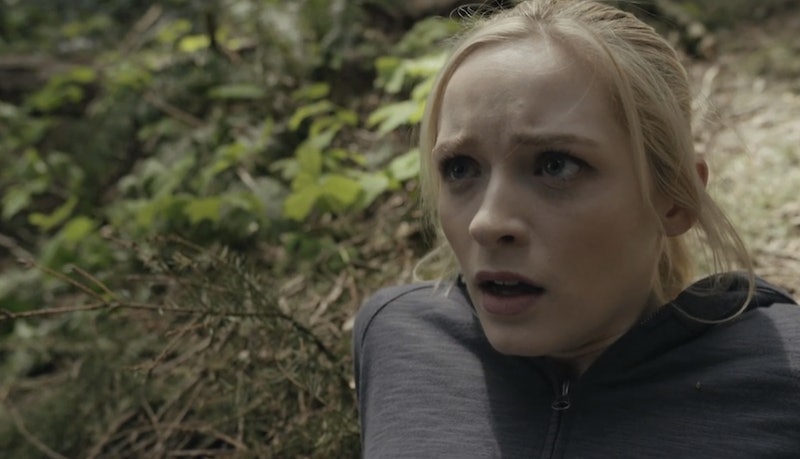 It's not easy to remain friends with your high school bestie when you go to college. With lots of new friends, new responsibilities, and very little time on their hands, it's not uncommon for onetime-BFFs to drift apart and lose touch during those few years of school. That dilemma is at the heart of the movie Deadly Sorority, which premieres on Lifetime on Saturday, May 6 at 8 p.m. ET. But as you can probably tell from the title of this film, a lot more is going to go down in Deadly Sorority than just a friendship fizzling out. Since this movie will be making its U.S. television debut on Lifetime, the thought of whether or not Deadly Sorority is based on a true story may also pop into your head, since films that premiere on this network are often inspired by real events.

The first place to look to find out what Deadly Sorority is all about is by looking at the film's synopsis, provided on Lifetime's website:

"Best friends Samantha and Kristina go their separate ways for the first time when Kristina gets into the hottest sorority on campus. But Kristina realizes this is just the beginning, and her life becomes a nightmare when Kristina is murdered and Samantha finds herself as a potential next target."

Well, there's nothing in there that says anything like "based on a true story." Films that are inspired by true events usually tend to make note of that sort of thing in their marketing. I haven't found any other information that would suggest that Deadly Sorority is based on a true story, so it looks like the movie is purely a work of fiction.

But something else that did immediately strike me about Deadly Sorority — which has the alternate title of Undergrad Nightmare — is its cast. Movies that air on Lifetime can be kind of hit-or-miss when it comes to recognizable names and faces. You'll see everyone from major movie stars to nostalgic favorites to up-and-coming actors lead films on the network.

Deadly Sorority is one of those movies that has a few very familiar faces in its cast. Main protagonist Samantha is played by Greer Grammer. You'll not only recognize her name, since she's the daughter of Kelsey Grammer and Barrie Buckner, but you may also know her face from such TV series as Melissa & Joey, Awkward., and The Middle. You might also recognize Moira Kelly, who stars as Professor Amy Thomas in Deadly Sorority, from her roles in The Cutting Edge, The West Wing, and One Tree Hill.

Of course, if you're hankering for more movies like Deadly Sorority once the end credits of this film roll, you're in luck, because murder plus sororities is a favorite equation among thriller and horror filmmakers. There are plenty to choose from, but The House on Sorority Row and its 2009 remake Sorority Row, both of which follow a group of sorority sisters who are stalked by a killer after a prank gone wrong, are two of the most famous of this genre. Scream 2 also takes Ghostface's terror to college with a memorable murder at a sorority house. Now, in the 21st century, anything that has to do with campus killers instantly makes me think of Season 1 of Scream Queens.

And who knows? Perhaps Deadly Sorority will one day be dubbed a cult classic, just like those aforementioned titles.

More like this
'Boiling Point's TV Sequel Is Set To Deliver A “Rollercoaster Of Emotions”
By Catharina Cheung and Sophie McEvoy
What Is Mary J. Blige’s Net Worth? The 9-Time Grammy Winner Is Doing “Just Fine”
By Hugh McIntyre
Michaela Coel Has Some *Thoughts* About The Nepo Baby Discourse
By Maxine Harrison
Everything To Know About 'And Just Like That...' Season 2
By Jack Irvin and Grace Wehniainen
Get Even More From Bustle — Sign Up For The Newsletter
From hair trends to relationship advice, our daily newsletter has everything you need to sound like a person who’s on TikTok, even if you aren’t.