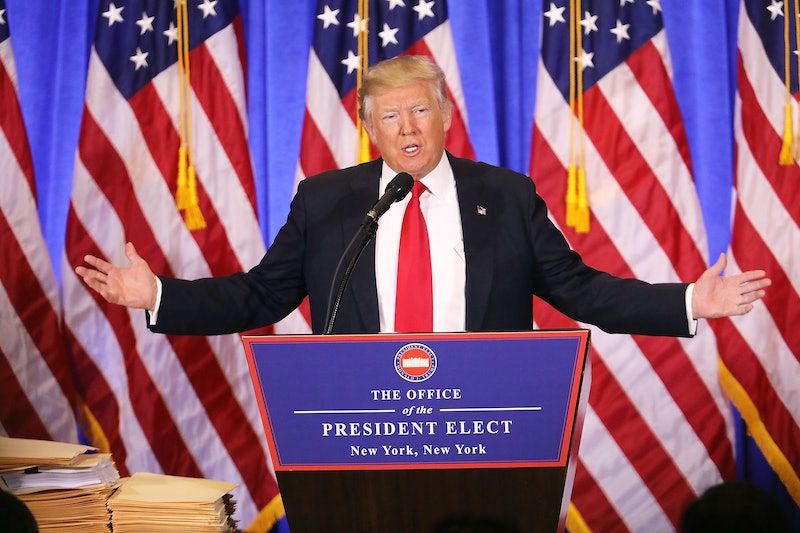 The president-elect chose an interesting rhetorical strategy to combat rumors during his long-awaited press conference on Wednesday. Trump actually claimed germaphobia as his defense against the golden shower allegations released in a dossier Tuesday, which doesn't... really make a difference.

Under normal circumstances, this would be one of the grossest things any politician could ever say, but this is barely makes the top five for Trump. It also isn't a particularly convincing argument to dispel the allegations, since sexual choices like "golden showers" don't really adhere to common standards of hygiene (and I think that's kind of that point). Furthermore, Trump didn't address how the rumor may have started or what might have incited it, and his tired old claim of anonymous people within the government being out to get him doesn't hold up either. The mystery seems destined to continue, and it's almost better that way — at least everyone can exist in the limbo of not knowing for sure.

Trump's other defense against the allegations is that he always behaves himself when he's out of the country in case anyone has planted cameras in his hotel rooms. "'No matter where you go, you’re gonna probably have cameras,'" Trump said he tells his traveling team whenever he travels. "'In those rooms you have cameras in the strangest places. Cameras that are so small with modern technology, you can’t see them and you won’t know. You better be careful or you’ll be watching yourself on nightly television.'"

It's another extremely thin excuse, since the whole world knows he doesn't behave himself in the United States even when he can see the cameras and recording equipment around him. It's also not comforting at all, because a man's only deterrent from hiring prostitutes to pee all over a hotel bed should not be his paranoid belief that people planted cameras in his room. But whatever — I'm not here to kink-shame the president-elect.

Trump's self-proclaimed germaphobia is just as unlikely to be conclusively proven as the allegations of urine-related sex acts can be. The world may never know the real story, but honestly it's probably better that way. Plus, his terrifying policy initiatives and rhetoric on women, minorities, and immigrants matter way more than whatever he may like to do in the bedroom. However, Trump may want to make extra sure to wash his hands after using the bathroom in the future so his story doesn't fall apart.