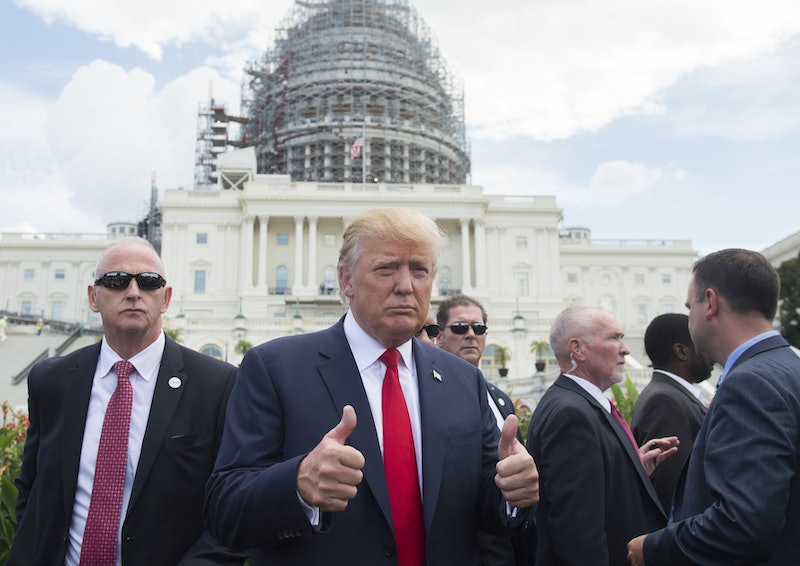 Since winning the presidential election, Donald Trump has been making a few unprecedented moves, to say the least. He's shied away from holding a press conference, opted out of putting his business in a blind trust, and has suggested nixing both his daily intelligence briefings and the daily press briefing. If recent reports are to be believed, Trump may infuse his inauguration with a bit of his unconventional style by not participating in traditionally scheduled events. Although his lack of attendance remains unconfirmed, many are wondering why Trump is reportedly considering skipping the Congressional luncheon.

Presidential inaugurations are largely driven by tradition, meaning that while each new incoming president sets his own theme, there are certain events the nation has come to expect to see over the years. Traditionally the new president heads straight from his swearing-in ceremony to a Congressional luncheon hosted in the National Statuary Hall inside the Capitol. Trump, however, may decide to opt out of the lunch in a potentially symbolic gesture.

Politico was the first to report that Trump was considering skipping the congressional luncheon, which traditionally follows the swearing-in ceremony. A source told Politico that Trump had brought up the idea of spurring the lunch in favor of joining the parade or mingling amongst the crowd that turns up to watch him take his oath of office.

According to Politico, it isn't certain how "seriously" Trump is reportedly weighing the option. The luncheon has not been listed on the official calendar of events put out by Trump's Inauguration Committee, although a note states "additional events to be announced soon."

It may be that Trump, who ran a heavily populist campaign with his promise to "drain the swamp," is looking to take a page out of former President Jimmy Carter's inauguration playbook and further mark himself as "a people's president." In 1977, Carter requested the Joint Congressional Committee on Inaugural Ceremonies cancel his inaugural luncheon. He then threw inauguration organizers for a loop when he and his family refused the limousines awaiting them and walked from the Capitol to the White House following his swearing-in ceremony.

The Inaugural Luncheon is a tradition that reportedly dates back more than 100 years. Along with organizing the incoming president's swearing-in ceremony, the Joint Congressional Committee on Inaugural Ceremonies has, since 1901, also been responsible for arranging an inaugural luncheon for the new president at the U.S. Capitol. Given the history and tradition of the Congressional lunch, Trump's failure to attend would likely be a serious message to both Congress and the American people about how he plans to lead.

But whereas Carter sought a humble walk home among his constituents, Trump's foray into the crowd feels more a symptom of his love of spectacle and adoration to those cautious of his incoming administration.