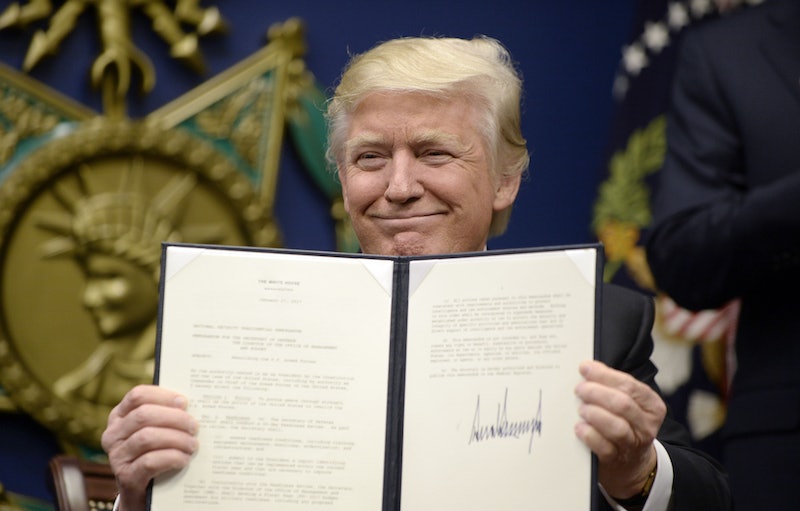 In his first week in office (yes, it's only been a week) President Donald Trump, between sparring with the media on the size of his inauguration crowd, put his signature on 14 executive orders and presidential memoranda. From the withdrawing from Trans-Pacific Partnership negotiations to the rollback of the Affordable Care Act, Trump has signed enough presidential actions to make his hand cramp. But is Donald Trump signing more executive orders than past presidents? At the rate he's going, he might set a modern record.

Obama, for example, basically issued reviews of and added to existing laws with his first executive orders. (He did sign an order to close the Guantánamo Bay detention facility in his first week, but that never came to fruition.) President George W. Bush, meanwhile, used his first few days in the Oval to organize personnel, establishing a new agency and creating guides for how existing agencies would handle faith-based and community initiatives.

All that to say, Trump's first set of executive orders, which have already sent ripples of change throughout the country, are outside of the norm. "In terms of scope and content, the first few things he's done are pretty dramatic," Phillip Cooper, a professor of public administration at Portland State University and author of By Order of the President: The Use and Abuse of Executive Direct Action, told NPR. "In some of the previous administrations, we've seen a lot of symbolic things happen right away, responses to campaign promises, but in this case, clearly, he's going after some of the most controversial issues."

Controversial issues like immigration and refugee resettlement, abortion, and the construction of the great wall. Many of these orders are making good on campaign promises from Trump, which is what the people who voted him into office should expect. But why does Trump need all of this immediacy?

Obama was widely criticized for his use of executive orders. In 2014, Fox News published an opinion piece from Judge Andrew Napolitano that warned of the dangers of a president who "wants to rule by pen." Republicans called him the "emperor." House Speaker Paul Ryan said Obama's executive orders were a "dangerous level of executive overreach." Trump himself called his orders "illegal and overreaching."

It's no wonder that Republican politicos and lawmakers would feel this way — despite taking over the House and the Senate in 2014, Republicans were powerless to stop executive orders from being issued. Obama often used executive orders to avoid being a lame-duck president.

Trump, on the other hand, is a Republican president with a Republican House and Senate. So why not let the legislative process take its course? Presumably, Trump could get most of his agenda to pass through Congress, right? It seems that our new president either lacks the patience or faith in his party to carry through with his most controversial campaign promises.