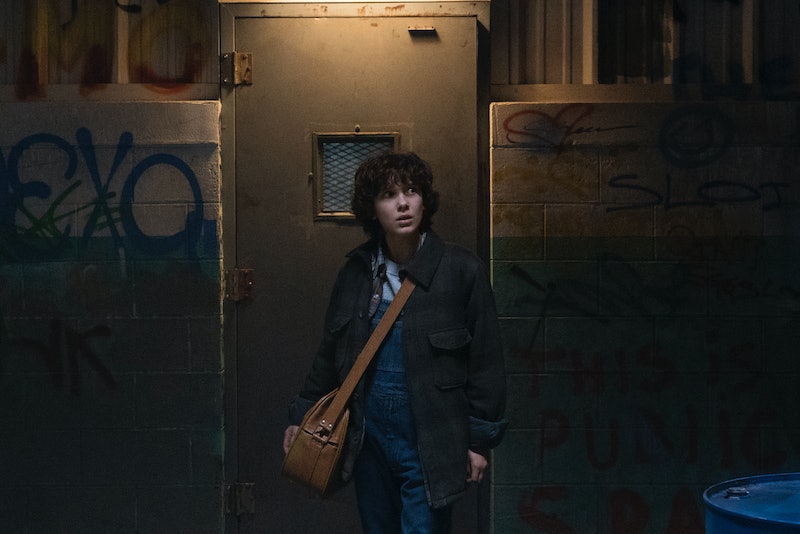 Spoilers for Stranger Things Season 2 will follow. Dr. Martin Brenner, one of the masterminds behind the insidious experiments going on at Hawkins Lab, and twisted makeshift father figure to our hero, Eleven, was attacked by the demogorgon at the end of the first season of Stranger Things. It's assumed that he died, but some qualms with that theory have always lingered. We didn't see him actually die onscreen, which left a certain amount of wiggle room for the writers this season. And by the end of Season 2, you'll need to know if Stranger Things' Dr. Brenner is still alive. While we got a serious clue, the moment was surrounded in some dubious circumstances — we still don't totally know for sure, it seems as though he may really still be alive and kicking.

To recap, in Season 2, Eleven finds her "sister" from the lab and together they track down Ray (one of Dr. Brenner's former minions) and boy, did they have some questions for him. Ray seems more reasonable than in his previous scenes — he understands their anger, and says he only ever did what Dr. Brenner told him to do and that he thought the patients in the study, including Eleven's mother, had been sick. He then offered to help Eleven and her sister find Dr. Brenner, who shock of shocks, Ray claims is still alive, despite the belief that the devious doc had actually been killed in the demogorgon attack at Hawkins Middle School. "I'm not lying," Ray said, after Eleven flung him up against the wall, like she does with people who she's not too fond of. "He trusts me. I'll take you to him."

Ray isn't exactly allowed to follow through on that offer — Eleven chokes him out until she sees a broken picture frame that featured his daughters. She's got a soft spot for family, and isn't exactly too keen to take a parent away from children like the lab and Dr. Brenner did to her. She eventually spares his life, and protects him from further harm, but she remains unconvinced that Dr. Brenner is still alive. After all, the man who told Eleven her "papa" was still alive was under serious duress when he coughed up the information.

But then Eleven's lab sister conjures a hallucination of Dr. Brenner, who utters the very telling words (but also not that telling because he's a conjuring) upon asking Eleven why she didn't look for him: "Is it because you thought I was dead? Or because you were afraid of what you might find? You have to confront your pain. You have a wound, Eleven. A terrible wound. And it's festering." This could be a clue, but it's also something Eleven's sister conjures to manipulate her enough to go after Dr. Brenner. She asked her to help heal their mutual wounds together, and to avenge Eleven's mother. But in the end, we don't get a chance to see the mystery solved — Eleven sees that her friends back in Hawkins needed help, so she returns home to them before we get even an ounce more information about Dr. Brenner.

That's the last explicit glimpse of Dr. Brenner all season, but it seems pretty apparent that he is indeed very much alive — if he isn't, that was a pretty significant amount of time spent on an inconsequential character in a nine-episode season. Plus, the show's creators seem to have also hinted that Dr. Brenner will be back. "As an audience member watching the show, if that was his death, that would be very unsatisfying to me – when the monster jumps on him and we cut away," Matt Duffer told IGN. "He would deserve much more than that as an ending. So yes, there's a possibility of seeing him again."

But is seeing all we're going to get? Was Kali's vision the last of Dr. Brenner? It appears as though we can't rest up just yet. There's surely more to be explored between Eleven's mother, her laboratory sister Kali, and Dr. Brenner. There's simply too much business left unfinished in this origin story.

More like this
If 'Entergalactic' Season 2 Happens, You Could Get A New Kid Cudi Album
By Kadin Burnett
Here’s Where You Can Stream 'Schitt's Creek' After The Comedy Leaves Netflix
By Brad Witter
'Ramy' Will “Probably” End With Season 4, According To Ramy Youssef
By Brad Witter
'Reservation Dogs' Season 3 May Finally Mend Bear & Willie Jack’s Relationship
By Gretchen Smail
Get Even More From Bustle — Sign Up For The Newsletter