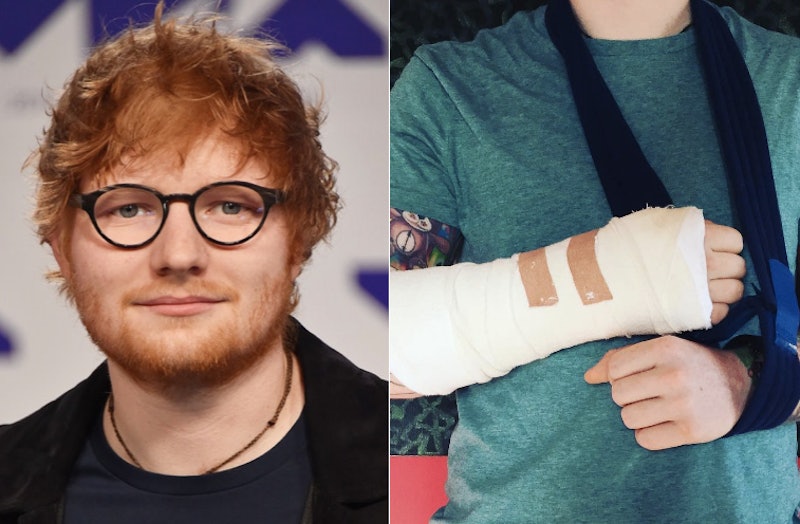 As it turns out, accidents happen to everyone, even if you're a Grammy winning singer. Over the weekend, Ed Sheeran was in a biking accident that left him with a broken arm, and the circumstances around the incident are pretty scary. In fact, the injury may actually lead to Sheeran having to cancel or postpone his upcoming shows on his world tour, and since he's wearing a cast in his latest Instagram photo, it seems like it could be serious.

According to a tweet from Australian radio host Kent Small, sources close to the "Shape Of You" singer say that Sheeran was hit by a car while he was riding a bike in London.

Early Monday morning, Sheeran shared a photo where one arm is bandaged up and the other is in a sling. Fortunately, it seems like Sheeran is (mostly) OK following the accident, but he did say in the caption that he's "waiting on some medical advice" to see if he'll still be able to perform. Of course, he can still sing with his injuries, but being that Sheeran plays guitar, that's a huge part of the show that might not be able to happen if he cant use his arms — and that's a pretty big deal, since he has 14 dates still remaining on his tour.

So far, there haven't been any updates on Sheeran's condition, or many details about what might have happened in the accident. Even so, fans are already taking to Twitter to react to Sheeran's post, and although some are worried that he won't be able to play his Asia concerts as planned, most are just concerned about Sheeran himself.

In fact, a lot of fans are pointing out the obvious: There's a very good chance that the upcoming shows will be affected, because he kind of needs his arms in working condition to offer up the same show he's been playing on the Divide tour.

A lot of good points being made here. If you've never been to a Sheeran concert, you might not know that he doesn't perform with a backing band, which means that more than a few arrangements would need to be made if he's going to continue the tour... otherwise it'll just be Sheeran on a stage singing a cappella. Then again, would fans really object to that?

And then, of course, others are imagining what kind of song Sheeran might write about this time in his life, since he did include a broken leg from his childhood in "Castle On the Hill." You have to admit that this particular attempt is pretty spot on:

And still others are mad enough that they're ready to fight whoever hit Sheeran — although it's very likely that the driver didn't mean to hit him. Can you imagine how horrifying it must be to be involved in something like that?

No matter what happened, it's a very unfortunate accident, but it's good to see that Sheeran's doing well enough to at least update his fans on Instagram. If he needs to take some time off to recover, of course they'll understand, even if they feel a little disappointed that they have to wait even longer to see him perform. And if he decides to go ahead with the concerts as planned? Well, those with tickets are definitely in for something different than what other concertgoers have seen, which is pretty exciting.

According to Sheeran himself, more updates are on the way. Even if he didn't need his arms to play guitar, broken bones are no joke. Get well soon, Ed.

More like this
How To Follow The New Royal Family Social Media Accounts
By Sam Ramsden
Everything To Know About Taylor Swift’s 10th Studio Album, 'Midnights'
By Grace Wehniainen and Jake Viswanath
Twitter Is Freaking Out Over Rihanna’s 2023 Super Bowl Halftime Show Announcement
By Stephanie Topacio Long
The Spice Girls Just Dropped A Brand New Music Video
By Sam Ramsden
Get Even More From Bustle — Sign Up For The Newsletter