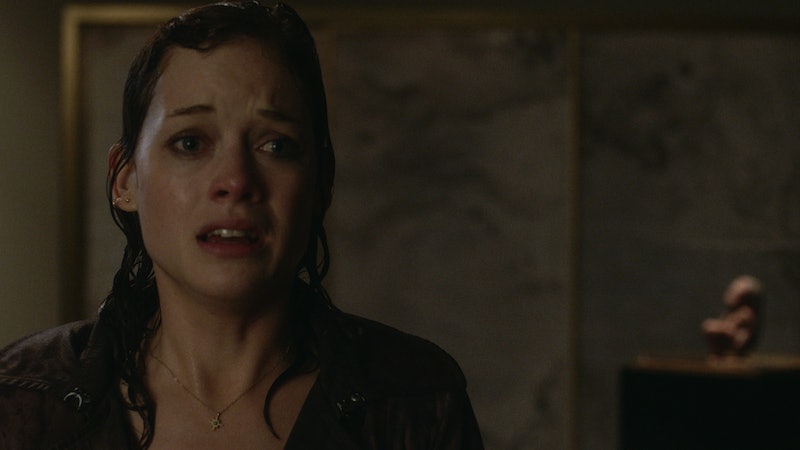 Netflix's What/If follows a young scientist named Lisa (Jane Levy) so desperate to finance her startup, Emigen, that she's willing to give a mysterious investor (Renée Zellweger) one night alone with her husband. Of course, What/If's Emigen isn't based on a real company, and amid the show's many secrets and mysteries, it's only a small part of a tangled web. But it may nonetheless remind you of some recent headlines.

As outlined by Entertainment Weekly, Emigen Molecular Sequencing is a "medical solutions" company hoping to save lives. Lisa's younger sister died of a curable form of leukemia when they were kids, and Emigen is focused on developing technology that could have prevented that. All of which might sound similar to another controversial med startup — Elizabeth Holmes' Theranos.

In case you missed the media whirlwind surrounding its rise and fall, the healthcare company was founded by Holmes in 2003 when she was just 19. It claimed to offer a revolutionary way for doctors to test blood, but the legitimacy of its technology later came into question, and it shut down in 2018. As reported by CNN, Holmes and former Theranos president Ramesh "Sunny" Balwani have since been indicted on two counts of conspiracy to commit wire fraud and nine counts of wire fraud after allegedly misrepresenting the capabilities of Theranos' technology and misleading investors. Both Holmes and Balwani have pleaded not guilty, per The New York Times, but are currently awaiting trial and face a maximum of 20 years in prison, a $250,000 fine, and restitution for each charge of fraud and conspiracy to commit fraud.

That being said, Emigen seems like a far cry from Theranos. Based on trailers for What/If, any below board scheming seems to be coming from Zellweger's mysterious character, Anne Montgomery, not Lisa. But the Emigen founder is willing to offer her husband up for a night with another woman in order to help get her company out of a bind, so her morals aren't totally uncompromised.

Theranos connection or not, What/If does have some aspects quite intentionally rooted in reality. Creator Mike Kelley said that in making the show, he wanted to tap into universal truths that everyone faces when making decisions in their own lives.

"Everyone understands there are decisions that you either made or didn't make that have affected your life and put you on your path," he said in an interview with Forbes. "While this isn't a Sliding Doors-style show, it is about making a morally consequential choice and watching what happens. We're the masters of our own destiny in a lot of ways and I wanted to shine a light on our responsibility for the choices we make that lead us to the places we now find ourselves."

Emigen itself may not be based on a real company, but the lengths people will go for money and power — or in Lisa's case, to achieve their dreams — certainly are. See how she navigates those temptations when What/If hits Netflix May 24.