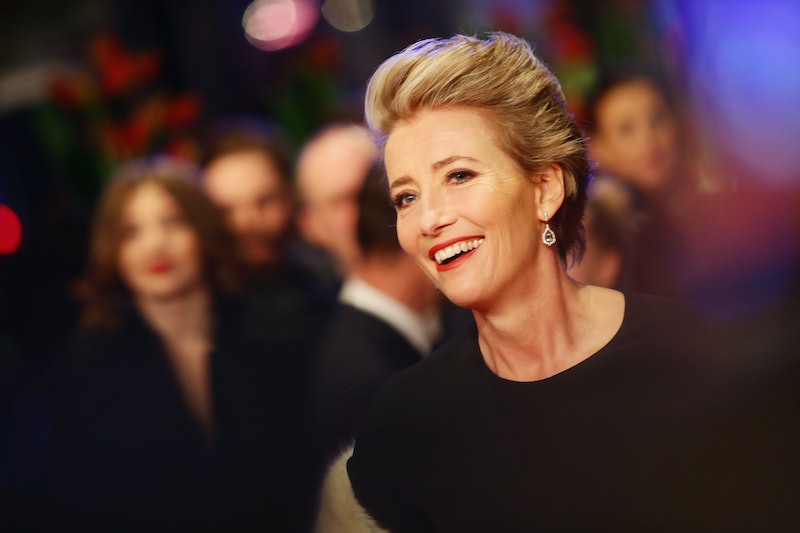 You know who we don't see enough of on TV? The absolute British icon that is Emma Thompson. Well, that's about to change thanks to the new BBC drama Years And Years, where she'll be portraying right-wing politician Vivienne Rook. While I'm totally excited to see her brilliant portrayal of the celebrity-turned-politician, I can't help but let my mind wonder about her life off-screen and who she shares it with. So, is Emma Thompson married?

As The Sun reports, in 2003 Thompson married fellow actor Greg Wise in Dunoon, Scotland. The couple also adopted Tindyebwa Agaba that same year, a Rwandan orphan and former child soldier. They also have a daughter, Gaia, who was born in 1999. Thompson and Wise initially met through Kate Winslet while they were filming Sense and Sensibility in 1995. Winslet and Thompson played the two main leads (Marianne and Elinor Dashwood), while Wise was cast Marianne's other love interest, John Willoughby.

As Wise told The Express in 2014, a psychic friend said to him that he would meet his future wife on set, which at first he thought was Winslet. The couple went to Glastonbury together, but Winslet encouraged him to go for Thompson. "She pointed out that we were right for each other and told me Emma's marriage was over," Wise explained. "It was all meant to be, just as my friend Helen predicted." He continued:

"We fell in love and it seemed that there was no reason not to get together. I simply picked the wrong woman at first, that's all."

Thompson was previously married to actor and director Kenneth Branagh for six years before they divorced in 1995. This was allegedly due to Branagh having an affair with Helena Bonham Carter while filming Frankenstein in 1994 as The Sun reports, but the couple also said it was due to "conflicting work schedules."

In 2013, Thompson opened up about the affair and how it affected her emotionally, so much so that she used the experience for her portrayal of Karen in Love Actually, as the Telegraph reports. "That scene where my character is standing by the bed crying is so well known because it's something everyone's been through," she said during a fundraising event. "I knew what it was like to find a necklace that wasn't meant for me. I had my heart very badly broken by Ken. So I knew what it was like to find the necklace that wasn't for me. Well it wasn't exactly like that, but we've all been through it."

The actor has since made peace with the situation, as she told The Sunday Times (via the Telegraph):

"I've had so much bloody practice at crying in a bedroom, then having to go out and be cheerful, gathering up the pieces of my heart and putting them in a drawer. That is [...] all blood under the bridge. You can't hold on to anything like that. I just think... pfft. It's pointless. I haven't got the energy for it. Helena and I made our peace years ago."

Through this experience and her relationship with Wise, Thompson has some solid advice on marriage and how it's not always perfect. "You've just got to hold on through the bad bits and if you get through to the other side it's always better," she said in an interview with Australian women's site Now To Love. "I think people in long, happy marriages tell a lot of fibs, like, 'Yes, it's been marvellous,' whereas I say 'No, sometimes it's been awful.' I hope it carries on, we don't know. We're very clear. We say, 'Well, this is nice, isn't it?' We don't take anything for granted."

And while Wise seemed somewhat surprised at Thompson's remark that marriage can "sometimes be awful" in an interview with The Times last year, he agrees with his partner. "Any life, any relationship, you are going to have s**t times, you are going to have good times," he said. "I think we're better now than we've ever been. But anyone who says their marriage has been blissful all the time is a liar."