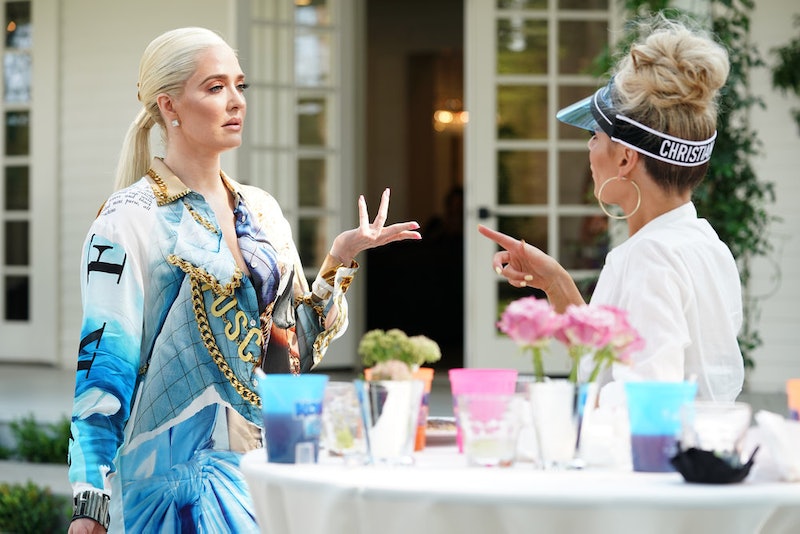 Every Real Housewives star has their own side gig — that's the whole point of being on the show. Promoting whatever else they have going on helps them make money, so it's no wonder that the main storyline surrounding Erika these days is focused on her tour. Erika is the Beverly Hills wife of high-powered lawyer Tom Girardi on the show, but when she's on the stage, she's Erika Jayne, badass performer. And after watching her concerts on RHOBH this season, fans couldn't be faulted for wanting to go see Erika Jayne on tour. The Real Housewives Of Beverly Hills star may already be gearing up for her next stage stint.

In the fall of 2018, Erika played her Pretty Mess tour, with shows in Jersey City, NJ; Dallas, TX; Brooklyn, NY; Charlotte, NC; Atlanta, GA; Orlando, FL; Atlantic City, NJ; Los Angeles, CA; and Las Vegas, NV; to name a few. Back in September 2018, Erika told Entertainment Tonight that her fans were clamoring for her to head out on the road. “It's great, because we created this project from my kitchen table and here we are now selling out," she said. "Chicago sold out, Jersey's got, like, 10 tickets [left]. I mean, Dallas is on the way, so — and then we're adding dates, which is super great. And to see people want to come out and see this show, it means a lot.”

Unfortunately for fans, the last show for the foreseeable future was in Brooklyn right before Christmas 2018, so if you didn't catch it, you might be waiting a while to see Erika on stage. For now, Erika does not have any shows on the books. But that doesn't mean she's not planning anything in the future — it just hasn't come up yet.

Most of Erika's scenes on Real Housewives Of Beverly Hills Season 9 has focused around her preparing for tour or being off on tour, and fans of the program have been begging Erika for some more insight into not just her performances but her life at home, too. "Yeah, I don't think that [some viewers] quite understand that [my personas] are one," Erika told Entertainment Tonight. "That’s what's happening in my life. My performance life, it is my life. That is my home life … That is my job." She went on to explain that Tom, her husband, won't be making appearances on Real Housewives Of Beverly Hills anytime soon because he's a lawyer and his presence could not only mess with his professional reputation but also interfere with his current clients and cases.

"You can't show those things on television, simple as that,” Erika said. We also won't be meeting Erika's son, Tommy, because he's a police officer and she says it's unsafe for him to be on the show.

Hopefully, Erika will head back on tour soon, but it is admittedly a little depressing not to have so much Erika on Real Housewives Of Beverly Hills this season. Her one-liners, her killer outfits, her deadpan faces — we need more of that right now besides all of this puppy gate drama. Maybe she can take a break between ours to give us all a little more about what we need? We'll find out for Season 10.