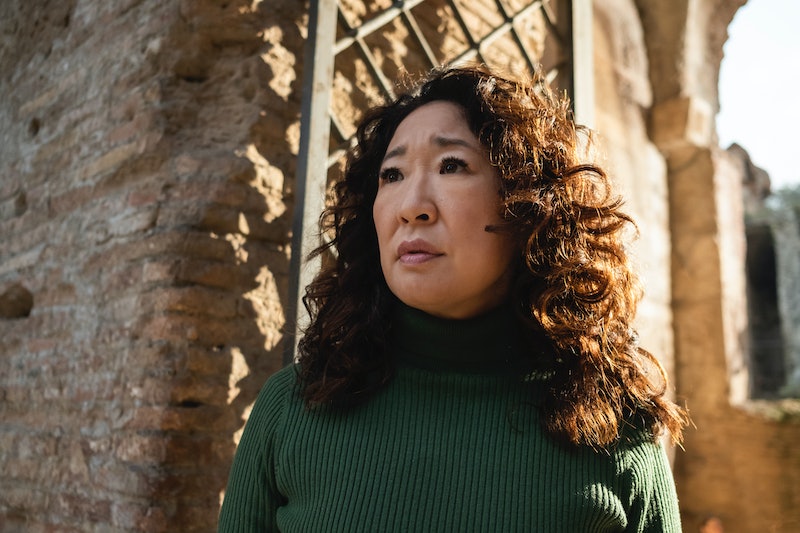 Spoilers ahead for the Killing Eve Season 2 finale. These violent delights have violent ends, and Eve Polastri certainly appeared to meet a violent end in Killing Eve's Season 2 finale. She and Villanelle kill Raymond — a handler for The Twelve — and run away from their respective employers. Everything is going a bit too smoothly until Eve notices that Villanelle's had a gun this whole time, which means she didn't have to kill Raymond (brutally, with an axe) after all. Understandably, she begins freaking out, and Villanelle retaliates by shooting her. But is Eve really dead on Killing Eve? Surely it can't be all over that quickly, can it?

What "You're Mine" illustrates so well is how far Eve has fallen and how much power Villanelle exerts over her. While it's true that they both genuinely care for each other — each insisting to Konstantin and Carolyn, respectively, that they wholeheartedly trust each other — there's also an unspoken tension. They haven't so much as kissed because their whole relationship is based on anticipation, not consummation. Whereas in Season 1 the two were playing cat and mouse, they teamed up this time around to catch The Ghost and Aaron Peel. Their partnership brought them closer together, yes, but therein lies the problem.

They've essentially become the same person, as Villanelle explains to an unconvinced Konstantin. And after Eve violently murders Raymond with an axe, she becomes horrified with herself, Villanelle, and everything that she's done over the course of the season. She's cheated on her husband (remember Niko? Yeah, Eve doesn't either!) with Hugo, essentially sabotaged her own career, and run off with a bona fide psychopath. The worst of it is, she knew how dangerous this all was going into it, as that MI6 psychiatrist warned her to be careful. Still, she may have a shot at redemption — here are all the clues that actually killing Eve may be harder than it looks.

Hugo may be a grade-A jerk-off, but he certainly didn't deserve to be shot — presumably by The Twelve's henchmen. However, after Eve finds him in the hallway, he says something that could foreshadow her own fate. "Played dead," he manages to squeak out while lying on the floor, clutching his side. "The hero's technique." Couldn't Eve have used the same approach with Villanelle?

Even though she's a psychopath and does irrational things, Villanelle seems to have a genuine love for Eve, and has refrained from hurting her countless times before. So while we already know she has killer aim, perhaps she didn't shoot to kill. She was far away from Eve at the time and only shot her once before walking away. We also don't know where the bullet hit Eve, so it could be somewhere minor.

This finale mirrors Season 1's, wherein Villanelle shot her handler. And while he was assumed to be dead, Konstantin showed up alive and well in Season 2. When he and Villanelle finally reunited in Episode 3, "The Hungry Caterpillar," she claimed that she "aimed to make sure I didn't kill you!" He dismisses her, saying she "aimed at [his] heart," but either way, this bodes well for Eve. Either Villanelle is telling the truth and she could have aimed similarly when shooting Eve, or Eve has a chance at survival even if she was shot in the heart like Konstantin, who seems to be perfectly fine now.

The Show Is Called 'Killing Eve'

Perhaps this is a bit too obvious, but come on! What would Killing Eve be without Eve Polastri? Sure, other shows have moved beyond their initial premises — Jane the Virgin, New Girl, How I Met Your Mother — but Season 3 seems a bit too early to kill off your titular character. Perhaps now Eve and Villanelle are merely even — Eve stabbed Villanelle, so being shot by her is a fair return.

There's Going To Be a Season 3

Worry not, Killing Eve fans, because the BBC America series was greenlit for Season 3 in April, per Deadline. And while the series will be changing showrunners once again — this time to Suzanne Heathcote — this should reassure fans that Eve's story isn't done just yet.

Despite all of this compelling evidence, it's natural to panic. Everything escalated so quickly — especially since it all seemed to be going so right for Eve and Villanelle. Whatever the outcome of that cliffhanger ending, viewers should be prepared for a bit of a wait, since it may be about a year until Killing Eve returns for Season 3. Until then, sorry, baby.