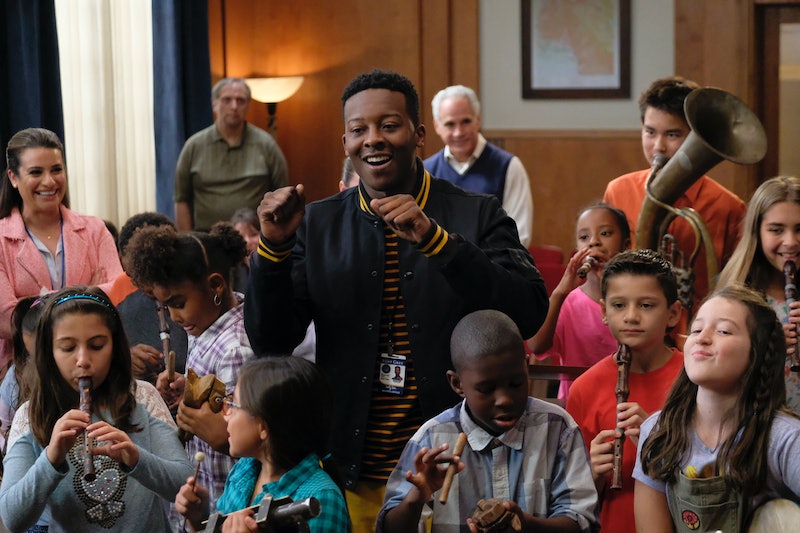 A new ABC sitcom traces the fish out of water tale of Courtney Rose, a fledgling rapper who runs for mayor as a last-ditch PR stunt to promote his music. The only problem? In the Oct. 3 premiere of The Mayor, he ends up winning, and he'll have to scramble to figure out how to lead a community with no political experience to fall back on. It's certainly an outlandish story, but not entirely inconceivable, so it's quite possible viewers will wonder if Fort Grey is a real town on The Mayor — if only for the sake of its potentially in-over-their-heads residents.

Fortunately, it's not. There's a Fort Grey in Guersney, an island off the coast of Normandy, but none in Courtney's home of California, or even the United States for that matter. But the premise should feel familiar nonetheless. An inexperienced outsider running for office and unexpectedly winning sounds suspiciously like Donald Trump's unprecedented presidential win, just with an attention-seeking rapper instead of a pot-stirring reality star.

It should also bring to mind a recent campaign that called for Chance the Rapper to consider running for mayor of Chicago. Back in April, a group of four twenty-somethings launched chano4mayor.com, a website that positions Chance — who grew up in West Chatham, a neighborhood on the city's South Side — as a leading contender for Chicago's 2019 mayoral election. "We love your music — we’ve been following your career from the first 10 days. We also love the work you’ve done to give back to the city that raised you," it reads, citing his million dollar donation to Chicago's public schools and hands-on approach toward local politics. "We know you don’t think of yourself as a politician, and we respect that. But this election is an opportunity for Chicago that we don’t want to miss."

Compared to Courtney, Chance is a much more qualified candidate. His father, Ken Bennett, served as Barack Obama's state director when the former president was a senator in Illinois, and has worked closely with current Chicago mayor Rahm Emanuel for a number of years, so he could easily pass on some political insight. Chance, meanwhile, is one of the city's most visible figures, and he's made it a point to take an active role in improving his community. Courtney, on the other hand, is at least initially only in it for the publicity, and his reach is much smaller.

Still, the connection stands. The Mayor's creator, Jeremy Bronson, told The Chicago Tribune that he based the show primarily around his early years in Washington, D.C., where he covered politics for MSNBC. But his research eventually led him to Chance. "I started thinking about outsider candidates that might have some skill set that they could bring to this job that would actually help, even if it wasn’t a one-to-one perfect background experience-wise," Bronson explained, continuing:

"I was very aware that [Chance] was socially conscious and was looking for ways to actually make a tangible difference. So yeah, I thought Courtney Rose could be a similarly socially conscious, like-minded guy who could also translate that into action. Obviously Courtney Rose doesn’t have quite the platform Chance the Rapper does — but he has a much bigger platform than he did the day before he was elected.”

Bronson noted in the interview that the character is original and not directly based on Chance, but the analogy makes sense. Courtney runs against a veteran politician with little awareness of what's actually going on in Fort Grey. What he offers, like Chance, is intimate, firsthand knowledge of what his city needs — something that also mirrors Trump's campaign appeals to Middle America, where many people felt they'd been left behind by wealthy Washington politicians. Clearly, it's something voters respond to. So, while Fort Grey is fictional, it should ring true to many viewers, whether it reminds them of America or their very own hometowns.

More like this
'House of The Dragon' Episode 6 Will Take Place A Decade After Episode 5
By Kadin Burnett
The ‘Emily In Paris’ Season 3 Release Date Is Here, Plus The First Footage
By Bustle Staff
The ‘You’ Season 4 First Look Shows Joe’s New Identity And Potential Victims
By Bustle Editors
Devi Is Going To Meet A “Smoldering Bad Boy” In ‘Never Have I Ever’ Season 4
By Jack Irvin and Gabrielle Bondi
Get Even More From Bustle — Sign Up For The Newsletter