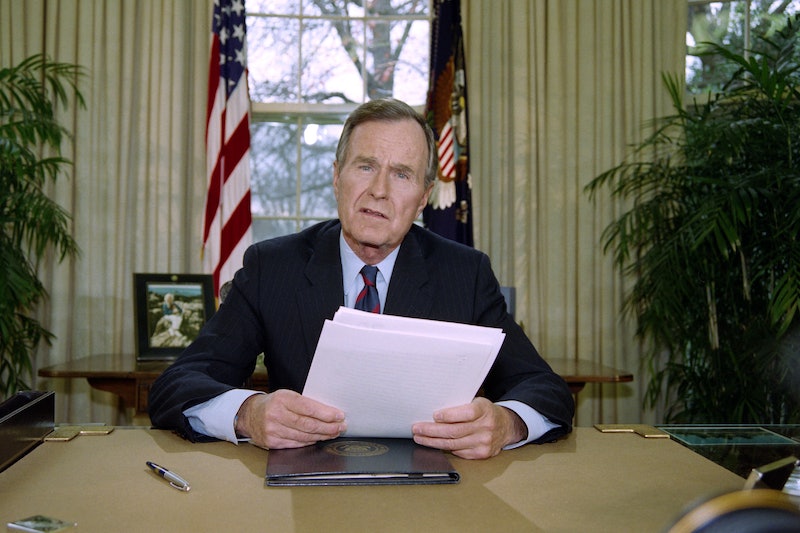 Time flies when you're terrified for the sustained future of your country. Somehow we've already gone through election season, the holiday season, and now we've reached the anxiously awaited inauguration. Considering how common it is for former presidents to attend, it's natural to ask, is George H.W. Bush at the inauguration? While it's technically not compulsory for living presidents to attend inauguration, their attendance, or lack thereof, can express a lot about the support system behind the incoming president, Donald Trump.

The spokesman for the 41st president, Jim McGrath, confirmed to Politico in December that he would not attend Trump's inauguration on Jan. 20 because of his advanced age. That sentiment was reiterated in the new year, with the spokesman saying Bush and his wife, Barbara, were "simply not able to attend" because of their age, according to a tweet from CNBC.

At Barack Obama's second presidential inauguration in 2013, both of the former Bush presidents skipped out due to the elder Bush's health concerns. However, during Obama's first inauguration back in 2009, both Bushes along with the two other living presidents — Bill Clinton and Jimmy Carter— attended.

While a possible lack of attendance from the 92-year-old Bush Sr. could be due to genuine concerns because of his age, it is also hard to imagine that he is eager to watch Trump being sworn in as president. Back in September, according to a report from Politico, the former Maryland lieutenant governor Kathleen Hartington Kennedy Townsend shared on her Facebook page that Bush Sr. would be voting for Hillary Clinton. McGrath neither directly dispelled or confirmed this rumor in an email to Politico, when he said:

According to reports, his son, the 43rd president, also did not vote for Trump. George H.W. Bush and George W. Bush watched their son and brother, respectively, be made into a human punch bag by Trump during the Republican primary. While Jeb Bush was at one time considered a favorite, Trump attacked him mercilessly during the campaign.

However, although the senior Bush will not attend, his son recently confirmed that he will be present for the inauguration. George W. Bush and Laura Bush will watch Trump sworn in as the 45th president. His office released a statement that the former president and first lady "are pleased to be able to witness the peaceful transfer of power — a hallmark of American democracy — and swearing-in of President Trump and Vice President Pence."