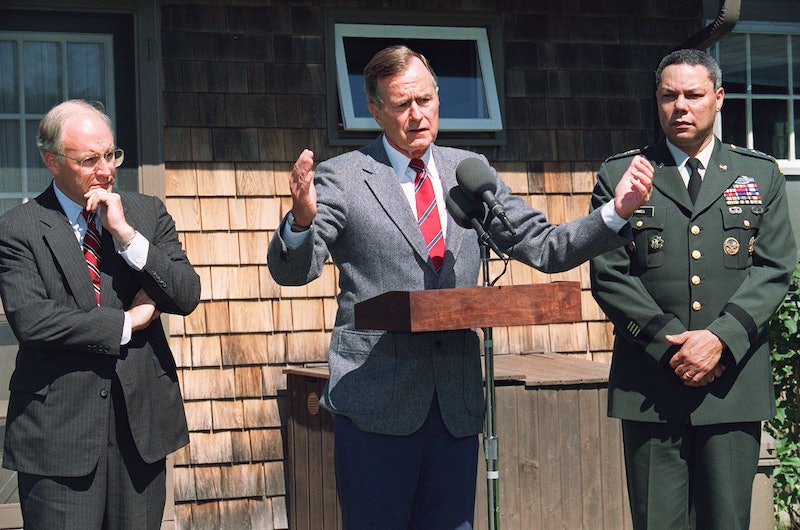 Early Wednesday morning, the Houston-area CBS channel reported that former President George H.W. Bush had been hospitalized. Naturally, many Americans are wondering if Bush is OK, and fortunately, he is in stable condition, his office chief of staff Jean Becker told the television station's news team. Update: On Wednesday afternoon, a spokesperson for Bush said that the former president had been admitted to the intensive care unit to address respiratory complications stemming from pneumonia.

Bush, who is the father of George W. Bush, the 43rd president, as well as 2016 presidential contender Jeb Bush, is 92-years-old and has had his share of health issues in recent years. This time, though, he's "doing fine," Becker told KHOU News — although the reason for his hospitalization has not been released.

That could be because there's no diagnosis yet. The Houston Chronicle reported that he was admitted recently and that the doctors at Houston Methodist Hospital "have a couple of theories" about what's ailing him. More information is to be released later Wednesday. Whatever the problem is, he is responding well to treatment and should head home in the next few days.

This is just Bush's latest health scare. The most recent was potentially more serious: a fall in July 2015 at the family's Maine home caused him to break a bone in his neck. Since then he has mostly ventured out in a wheel chair. His recovery went well, though. He even threw out the first pitch at a Houston Astros game in October of that same year. Bush repeated the ritual in April 2017.

His other recent public appearances include a commemoration of the 75th anniversary of the Pearl Harbor attack. Bush and former Republican Sen. Bob Dole, both veterans, were in attendance at the Bush Center in December to mark the day.

"Pearl Harbor Day changed President Bush's life. It certainly changed my life, later. But that's the price we pay for freedom," Dole told those gathered. Bush joined the Navy after the attacks as an aviator. His plane was then shot down over Japan a few years later; Bush would be the only survivor.

In an op-ed for USA Today in January, Bush used the Pearl Harbor attack anniversary to talk about the important of democracy, something that seems increasingly important in the current political climate not just here in the United States, but around the world. He talks about what things felt like in the early '40s:

Before Pearl Harbor, many believed the tide of democracy, which had lifted and sustained our republic for 160 years, was ebbing. Totalitarianism was on the march, and the widespread misery of the Great Depression had some declaring capitalism dead — and seeking to concentrate vast new powers in the hands of federal government. They felt the United States was a nation in decline and needed to follow a new path to the future.

Does that sound familiar? Luckily, as Bush goes on to explain, America fought for its democratic values and won WWII. Nowadays, there are no immediate threats of war, but it is telling that the 41st president did not endorse fellow Republican Donald Trump for president.

We can only hope for Bush's speedy recovery. His insight into past conflict and his ability to speak with the authority of a former president is increasingly vital.