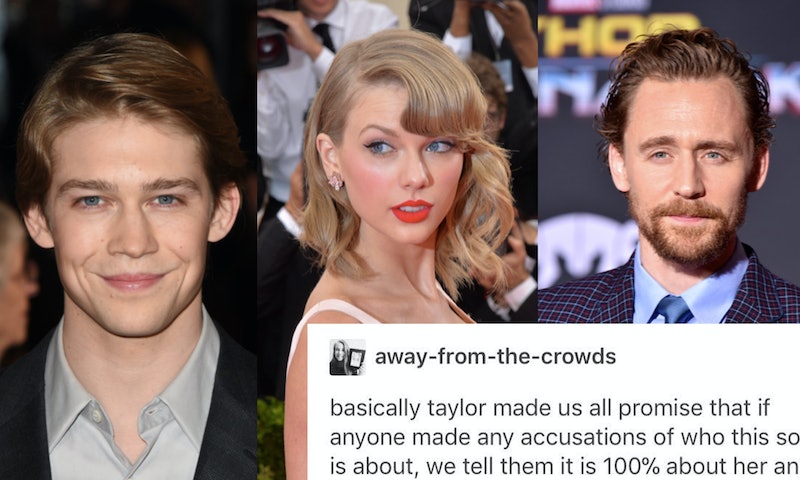 In typical Taylor Swift fashion, she dropped a new song and sent the internet into a frenzy. There are theories and reactions aplenty, but is "Gorgeous" actually about Joe Alywn? Loyal Swifties seem to think so; they're using Twitter to try and set the record straight. Especially since so many people think Swift's new song is about Tom Hiddleston. But honestly, after you hear both sides, you'll be more confused than ever.

To begin with, the lyric "Ocean blue eyes looking in mine / I feel like I might sink and drown and die" could easily be a nod to either guy. After all, Swift's current boyfriend Alwyn has blue eyes, as does The Avengers actor. But because the song seems to be about a guy she can't be with — you know, because he's too "gorgeous" — wouldn't it make sense for the song to be about someone she's no longer with? Plus, she mentions an accent and Hiddleston is from the U.K.

But not so fast, Alwyn is also British and likely speaks with an accent. And there is, indeed, the very convincing post from a fan who claims to have attended one of Swift's secret listening sessions. The fan wrote a Tumblr post, which was then shared by the @taylornationSG account. To quote Swift herself, are you ready for it? The post reads:

"basically [T]aylor made us all promise that if anyone made any accusations of who this song is about, we tell them it is 100% about her angel boyfriend of 1 year."

The fan then clarified, "(this isn't a secret, she wanted us to tell people)." If someone was lucky enough to attend a secret listening session, would they really lie? They couldn't betray Swift's trust like that.

Still, the internet is divided. But before diving in, let's re-listen to the song.

And now that that's out of the way, it's time to consider both sides.

With lines like, "You make me so happy," it could be a shoutout to her current relationship bliss.

But she does quickly follow that line up with, "it turns back to sad, yeah / There's nothing I hate more than what I can't have." Hmm, perhaps she wrote the song about the time right before she and Alwyn got together?

This person sure thinks so:

The song does indeed have its share of pettiness. And would you really diss your current boyfriend? All signs point to a former flame.

Plus, the whiskey reference above is just too good. (Props to fellow Bustle editor, Martha Sorren, for finding that connection.)

Others just really wished it was true. (See above.) And this person couldn't deny the evidence:

Sometimes a photo is worth a thousand words.

While some parts of the internet are clearly divided, there are others who just don't know what to think.

As the person above points out, maybe some parts of the song are about both of them. Either way, fans are pretty exhausted just thinking about all of it.

Seriously, so exhausted. So confused.

While nobody may be able to agree on who "Gorgeous" is really about, there seem to be two concrete conclusions. First of all, Swift has a type — boys with accents and blue eyes. And secondly, the song is not actually about Kanye West, despite sharing the same title as one of his tracks from My Beautiful Dark Twisted Fantasy. Touché, Taylor — you really threw the internet for quite a loop in a mere 24 hours.

P.S. Once everybody sorts out the whole "Is this about Joe? Or is it about Tom?" debacle, can they please direct their attention to a much more important mystery — who is the baby at the beginning of the song? The internet needs answers.