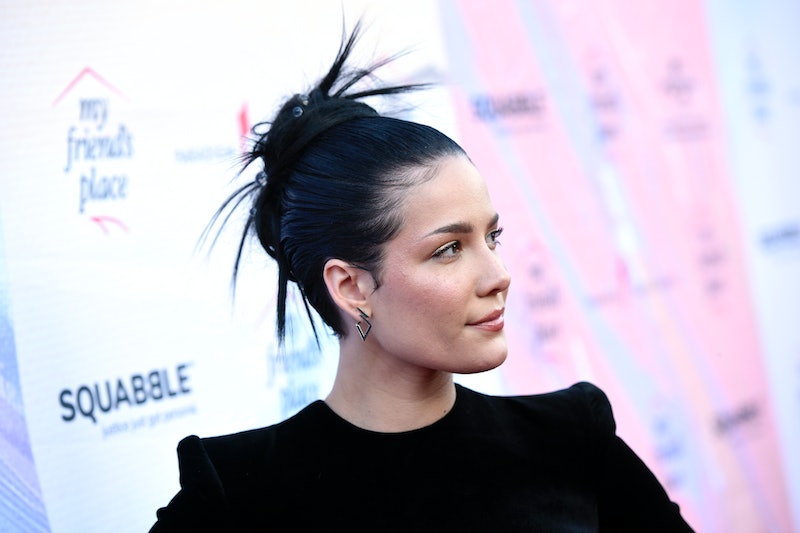 The Billboard Music Awards are coming up, and as everyone's favorite recording artists hit the red carpet, it's time to speculate about who will show up with who. Making a relationship red carpet official is a pretty big deal, after all. As far as we know, Halsey is single, so she may be walking the carpet solo before her duet with BTS. But if there's any merit to celebrity gossip (usually there isn't, but let's roll with it for a minute), she may arrive with a date.

Neither party has officially confirmed anything, so take this with a large grain of salt, but some have begun speculating that Halsey is dating Yungblud, with whom she recently collaborated on the song "11 Minutes." The two haven't said much about a potential relationship, but that hasn't stopped the rumors from flying. Last month, the pair performed together at the 2019 iHeartRadio Music Awards — the same night E! News suggested they were inching closer to making things "award show official."

Performing together doesn't really suggest much, but this came months after rumors first began circulating. According to E! News, Halsey and Yungblud were spotted leaving the studio together last November as Halsey carried a big bouquet of flowers. And in February, she explained to Billboard they met because she'd slid into his DMs, joking she was a "cougar" because she's 24 and he's 21.

Halsey didn't explain the exact nature of their relationship, but did say they had a natural creative connection. "We're really similar artists," she told the outlet. "I discovered him really organically and I was totally blown away because I started everything in my career very organically — building a cult fan-base, creating a secret language, playing shows nonstop, touring my butt off for five years and really creating an environment that felt like a community."

The two have also been pretty present on each other's Instagram profiles for the past few months — everything from Christmas gift exchanges and cozy club hangs to late night walks and onstage performance shots have been documented since this winter, and they're basically always flirting in the comments. Whether they're just very close friends or something more, they seem happy spending time and making music together.

Prior to her connection to Yungblud, Halsey was in an on-again, off-again relationship with rapper G-Eazy. According to People, they split for good in October 2018 after nearly a year and a half of ups and downs, apparently even unfollowing each other on all social media. That was reportedly a tumultuous time — an unnamed source told People that around the time of the split, G-Eazy was "was partying over the weekend and girls were all over him. He didn't care who saw."

If Halsey and Yungblud are dating, hopefully they'll be able to make things last. Neither of them have confirmed they're anything more than friends, but there's clearly a lot of love between them. Heck, maybe Halsey will just bring Yungblud to the BBMAs as a friend!