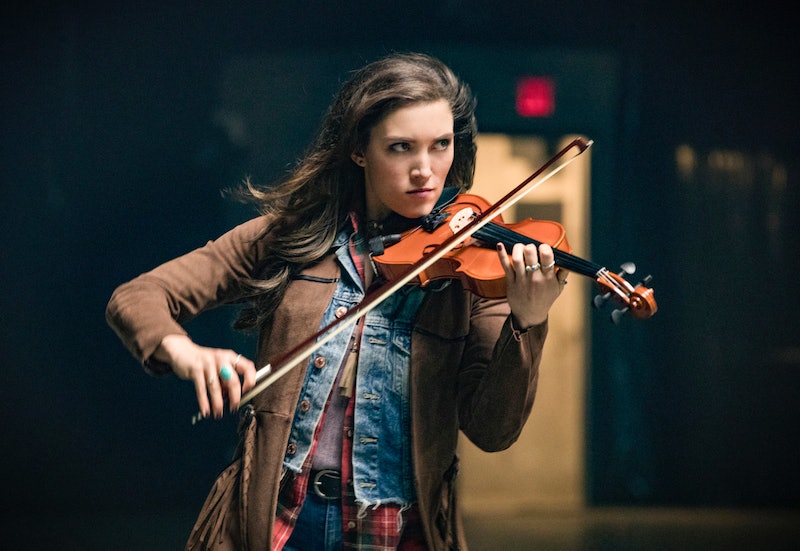 The Flash Season 4 has been all about featuring the most creative metahumans from the comics, ones with powers that are both dynamic and potentially funny. The Feb. 27 episode of The Flash introduces Izzy Bowin (Miranda MacDougall), a country fiddler with dangerous musical powers, who definitely fits this bill. Izzy Bowin isn't technically in The Flash comics, but she may seem familiar anyway.

In a preview for the upcoming episode, Izzy is shown playing her music while knocking the Flash off his feet with destructive sound waves. The preview also suggests that Izzy, as a bus metahuman, plays a part in the Thinker's scheme and is in danger because of it. So it's important to know everything there is about the musical metahuman.

Izzy Bowin appears to be a new interpretation of the comic book character Issac Bowin. In the source material, Isaac is a petty thief turned metahuman fiddler with the power to hypnotize and "produce destructive waves of force" while using his violin. He first appeared in the 1948 comic All-Flash #32 and made recurring appearances until his death in the 2005 comic, Villains United #1. Izzy Bowin, like many comic book turned Flash TV characters, is not a carbon copy of her counterpart from the books.

Obviously, The Flash has changed the gender of the original comic book character. And this isn't the first time the show is gender-swapping from the original comics. The most recent example of this is the Thinker's love interest and partner on the show, the Mechanic. The Mechanic in the comics is a man; on the show she is played by Kim Engelbrecht. By making these changes, the show is adding to the number of interesting women already on The Flash.

Isaac in the comic books works with the Thinker. This is huge because his storyline in the comics may give insight into the Thinker's mysterious plans on the show. Isaac and the Thinker collaborate with another villain called the Shade to erase the entire city from the minds of the public. All of Central City is suspended in a field where nobody outside remembers it exists. Eventually, the Flash and Jay Garrick defeat the bad guys and return the city to normal.

Of course, it is highly unlikely that this exact scenario will play out on the series but it is an interesting possibility. Carlos Valdes (Cisco) spoke about the complexity of the Thinker on The Flash during a set visit, according to SyFyWire. And it certainly sounds as if viewers don't yet know the half of what DeVoe has planned. Valdes said:

"So basically, (Clifford) DeVoe (the Thinker) has this overarching plan that involves all sorts of circumstantial minutia. Whether the team knows it or not, they're already conducting actions that are part of DeVoe's plan and sort of falling for his trap. So, it's really more a matter of Team Flash discovering their place within his plan. Just when you think that the team is getting close to figuring out what DeVoe's intentions are, it goes beyond that, exponentially. I think viewers can expect to go on the ride of their lives."

Only time will tell how closely the TV show's interpretation of the Thinker will connect to the comics. Whether Izzy cooperates with the villain — as her male self does in the books — could be a major clue.

The bus metahumans are interesting, because they are not inherently evil or inherently good, and because of this Izzy could become whatever the show needs. The Flash's version of her powers matches up to the source material, and her empathy for the Thinker may as well.