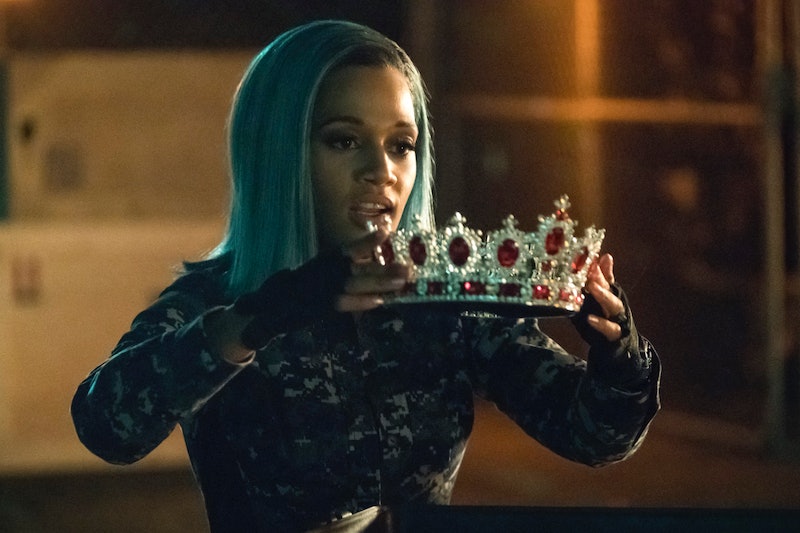 As The Flash speeds up to the Season 4 finale on May 22, there are plenty of questions left to answer about this year's arc. Pressing questions like what’s going on with the last two bus metas, Janet Petty and Edwin Gauss? For fans wanting a bit of context, yes, The Flash’s Janet Petty is in the comics. And often, DC comics can provide a bit of insight into new characters on the series as well as a sneak peak about what’s to come. So, be warned there are spoilers for the comics ahead.

Fans of The Flash first heard about Janet Petty in the episode before the brief hiatus, “Run, Iris, Run." In that episode, Harry and Cisco work together on a Thinking Cap similar to DeVoe’s. Despite some initial hesitation, they decide that the situation is dire enough to use it in order to find out the names of the last two bus metas. Donning the can, Harry reveals their names.

And like many characters who appear on The Flash, Janet (played by Bethany Brown on the show) does have a comic book past. Something that’s different about this version to her comic book self, is that the character in the source material is male. Null, who first appeared in Hawkworld Vol. 2 in 1992 has no real name or anything resembling an origin story. However, his powers seem very similar to the meta Janet Petty’s. His abilities include gravity manipulation, which means that with the flick of his fingers, he can make people weightless. And the issue with that is that whatever goes up must come down. In the promo for the episode, Janet Petty's gravity manipulation powers put Barry in serious danger.

Janet Petty isn’t the only gender swapped villain in The Flash''s four season history. In Season 1 there was the Bug-Eyed Bandit, and Season 3 featured Top, who were both originally male characters in the comics. Season 4 featured two more characters who were also originally men in the comic books: Black Bison and Fiddler, both who were cast with women.

Regardless of how she's been altered, Null (Janet) looks like quite the formidable foe in what the CW has revealed so far about her character. In the trailer for her debut episode, appropriately titled “Null and Annoyed,” she’s shown crawling stealthily against a ceiling while also having the ability to make the Flash completely weightless. She causes Barry to float so high that if he were to fall, it would certainly kill him. (Ralph, of course, makes an inappropriate Charlie Bucket reference.) While it’s not exactly clear what her motives are, she's definitely a villain, or at the very least a criminal. Along with putting the Flash’s life in danger, she also uses her abilities to steal a piece of expensive-looking jewelry from a woman. In the photo above, she has her hands on a crown. But does she have any idea abut the Thinker and his plans for all the bus metas? All the rest were taken by surprise by his (her, his) evil plan.

There are still several episodes left before Season 4 of The Flash comes to an end, and lots of mysteries still loom aside from these final two bus metas. Can Barry and Team Flash defeat DeVoe? What is it that DeVoe even wants, except to prove how smart he is? Who's the Mystery Woman who first showed up at Barry and Iris's wedding? Is Ralph really sticking around? Perhaps Janet and Edwin can help them to at least begin unraveling these final threads. Though, as her comic book counterpart indicates, Null probably won't join up without a fight.