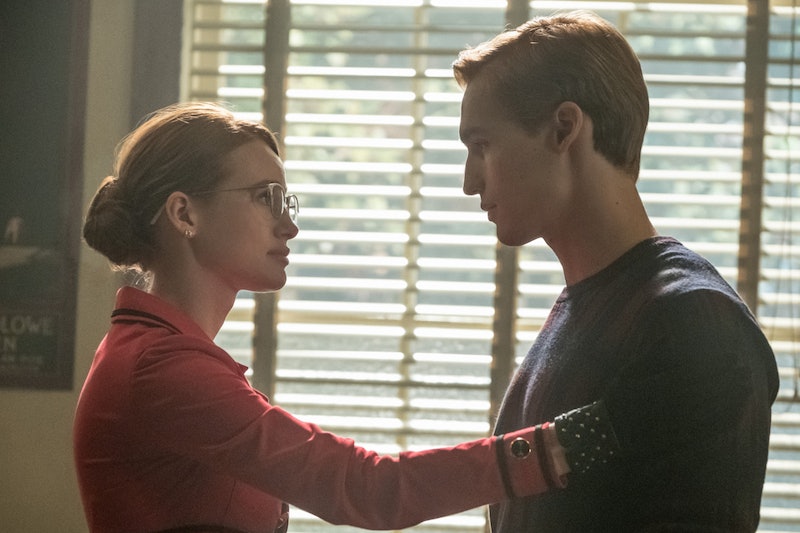 Spoilers ahead for Riverdale Season 3, Episode 21. When Cheryl claimed that The Farm was allowing her to talk to her brother Jason, Betty (and fans) were skeptical. How could she be talking to a dead person? Well, she may not have been, because Jason Blossom might be alive on Riverdale. On Wednesday, May 8, Jughead finally learned who the Gargoyle King is: Jason.

Ethel divulged the information, but Jughead didn't believe it at first. After all, this show started with Jason's death. Three seasons later, it seems impossible that he's been alive this whole time. So Jughead dug up Jason's grave to see if the body was there. Surprise! It wasn't. So even though viewers watched Jason get shot by his father, it seems all may not have been as it appeared. Apparently Cheryl really was talking to her brother. Maybe that means Alice Cooper really is talking to her son, too? Are they zombies? What kind of farm is this?

Perhaps The Farm's organ harvesting program saved Jason from an untimely death, and now he's terrorizing the town as the Gargoyle King — either as a way to pay his debt to Edgar Evernever, or to show his gratitude. It would honestly make more sense if someone has been Chic Cooper-style impersonating Jason, but the theory that he's still alive has actually ben pretty prevalent since Cheryl first mentioned she was in communication with her twin.

In fact, a month ago, a fan on Reddit posed the very idea that Jason was alive and the Gargoyle King. It's unclear what his motive would be, but another Reddit user pointed out that it's odd how Dilton Doiley was the first one to find Cheryl after Jason's "death," and also the first one to be sacrificed to the Gargoyle King. Reddit user quoth_tthe_raven also suggested that perhaps Jason was already a member of The Farm when he supposedly died, because he was wearing all white when he "drowned."

All could be revealed in the finale on May 15. The episode is called "The Final Quest," so it stands to reason that the Gargoyle King will at last be unmasked (er, for the third — and hopefully final — time). As the synopsis reads:

"After receiving mysterious invitations, Archie, Betty, Veronica, and Jughead band together to confront the evils of their past once and for all. Meanwhile, chaos ensues at The Farm after Edgar makes a chilling announcement."

Perhaps Archie, Betty, Veronica, and Jughead's past evil has to do with Jason, who they thought was in their past. Or maybe the announcement Edgar makes is that Jason has been alive, and he's been harvesting people's organs to keep him that way.

However Riverdale explains Jason, uh, rising from the dead will definitely make for a must-watch episode. The whole town saw his father shoot him in the head. That seems like a hard thing to survive. Was that not really Jason who died, or is it not really Jason who is the Gargoyle King? So many questions and only one episode left to answer them all. Buckle up.