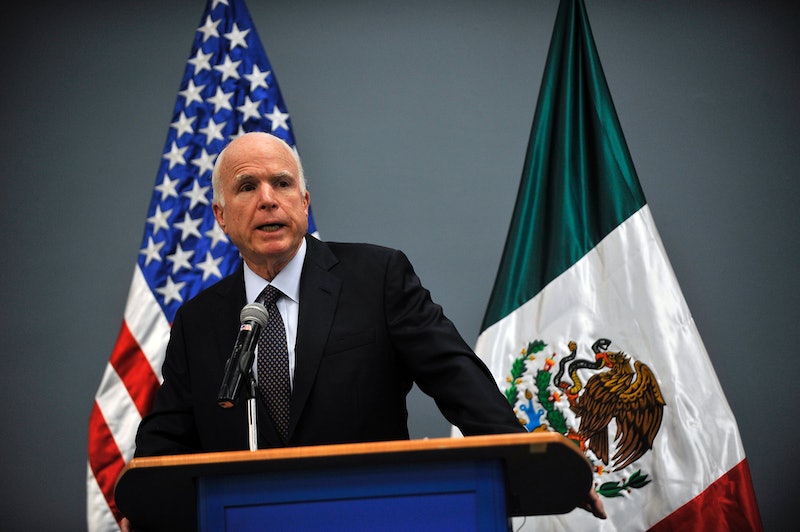 The 2017 presidential inauguration is one of the most contentious in American history, with unprecedented uncertainty regarding who will be in attendance. Some of the most interesting appearances will actually be by those within Donald Trump's own party, since he has caused so much controversy even within the GOP. So, is John McCain at the inauguration? He's been one of the biggest Republican Trump opponents so far, but that probably won't stop him from showing up to support his de facto party leader.

McCain has been one of the most vocal establishment voices against Trump, particularly on his recent stance on Russia. The Arizona senator made a major break from Trump last month when he called Russia's alleged election hacking efforts "an act of war." Russia has denied the hacking allegations.

McCain and the President-elect have been infamously at odds since Trump's comments last year about McCain's time as a prisoner of war during the Vietnam War. And after the 2005 hot mic tapes were revealed, McCain was even more skeptical, saying:

Donald Trump’s behavior this week, concluding with the disclosure of his demeaning comments about women and his boasts about sexual assaults, make it impossible to continue to offer even conditional support for his candidacy.

McCain likely won't stop being critical of Trump, but that doesn't mean he won't attend the inauguration.

When it comes down to it, McCain may not "like" Trump, but he is a strong supporter of intra-party decorum and a life-long devotee of the Republican party. His attendance is especially indicative of this considering he has less incentive to attend the ceremony than many of his fellow politicians, since his term could ostensibly last longer than Trump's presidency.

McCain's been a GOP senator since 1986 and in all that time, he's proven himself to be a leader of the party who's dedicated to keeping the party cohesive. And Republicans definitely need that right now so that "Trumpism" doesn't tear the party apart. Ultimately, McCain's appearance at the ceremony would be a strong symbol for that spirit of inclusivity. Ever the statesman, McCain seems to have put the party before himself, despite his own qualms with Trump. Whether or not that was the right call given the wildly controversial nature of Trump's campaign and presidency, McCain's offering his aid to the President-elect seems to be honorable.

If McCain braves the cold to make the inauguration, he's clearly invested in creating a working relationship with Trump over the next four years at least.