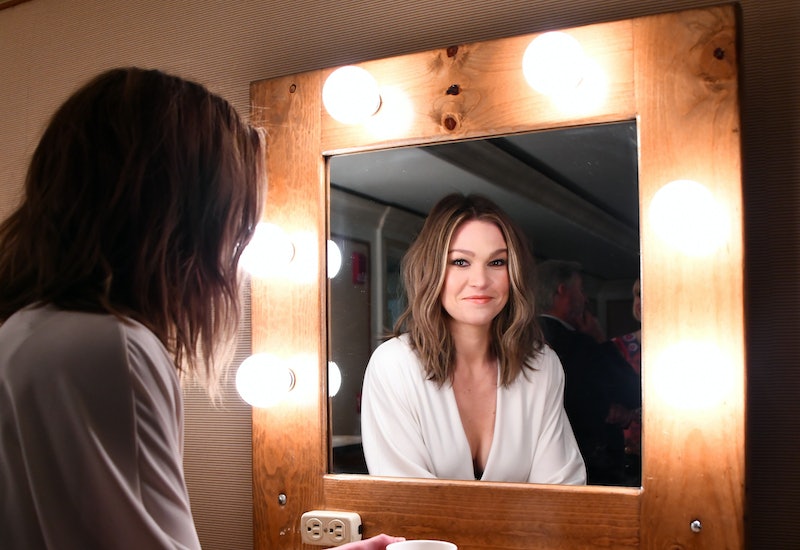 Julia Stiles is coming back to a screen near you with the second season of Sky Atlantic's hit original show Riviera. No stranger to drama, Stiles has appeared in some truly iconic and memorable roles throughout the years. Does anyone else feel like they have grown up alongside the star? OK maybe that's just me, but, of all the '90s and '00s actors out there, she is one of the most memorable. But how grown up is she really? Like is Julie Stiles married? I'm interested to find out more about the star.

Well guys, it's a big yes the marraige front. Stiles tied the knot with her husband Preston J Cook back in 2017. She was pregnant with their first child when the nuptials occurred and made sure and make a pretty lit joke about it on her Instagram. She captioned a photo of her baby bump, with a hell of a wedding dress draped over it, with: "Who doesn't love a shotgun wedding?" That's ten out of ten for sense of humour IMO.

The pair welcomed their first child shortly there after, when little Strummer Newcomb was born. The bouncing baby boy got his very own Instagram post where Stiles bigged up all of the people who helped welcome him into the world.

"Strummer Newcomb Cook, born October 20, 2017. Thanks and ever thanks to the extraordinary Doctors, Nurses and staff at Mount Sinai for helping to bring this utter joy into our lives. 'Hello, World!'"

Stiles' latest show Riviera is based in (you guessed it) the French Riviera and she plays the role of Georgina, the widow at the centre of the story. Not just any widow, the widow of a billionaire who has died in mysterious circumstances. Leaving her hell bent on finding out who did it and, of course, avenging her husband's death.

Speaking to the Metro about the upcoming season, Stiles shared that she got involved with doing stunts herself, which was a bit trickier than she had anticipated:

"They had a stuntwoman to do the rehearsals, to see how challenging it would be. And then, I was game — I wanted to do that myself. But I was not prepared… they recreated a storm, with water tanks that are supposed to simulate waves, and it's like 600 litres of water being chucked at you — repeatedly! That will actually knock a person over."

One exciting addition to the cast is the brilliant Will Arnett, who you probably recognise best from Arrested Development. He stars as Georgina's charming AF uncle Jeff. Speaking to Digital Spy, Stiles described Jeff as being able to get past Georgina's tough cookie exterior:

"[Jeff is] someone who sees through her armour. Will is perfectly cast as her mysterious and yet charming Uncle and I am excited to explore how far Georgina will go to protect her new life."

The new season kicks off on Sky Atlantic on Thursday, May 23 at 9p.m. In the meantime, why not catch up on the first season?