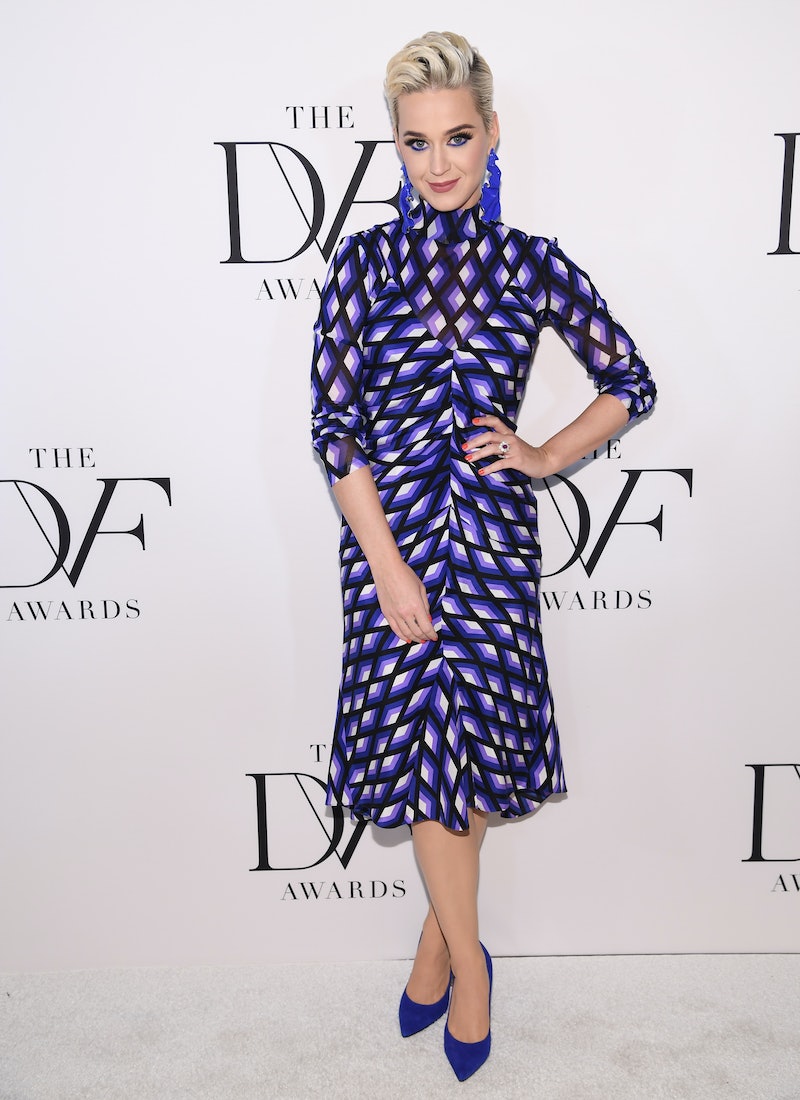 The one constant when it comes to her coif is change but this particular strand switch up just might surprise you. Katy Perry debuted a long, golden blonde lob via a post on her personal Instagram over the weekend, and she is almost unrecognizable. That's because the singer and American Idol judge has been slaying a platinum blonde, punk rock pixie for quite a while now. Perry has always been a hair chameleon, rocking powder blue, pale pink, deep purple, and jet black hair at various points in her career through the years. She has also gone with Bettie Page bangs, super long and straight strands, finger waves, and beyond. Perry isn't afraid to mix it up when it comes to her color and her cut. But this is the most normal haircut she has ever had.

Perry didn't provide any insight into this new 'do in the caption of the post. But she didn't need to, either. It's very likely a wig, and it looks terrific. However, given Perry's downright fearless propensity for change, she probably won't be committing to the shade or the style for the long term.

Perry is rocking the "no makeup" makeup look in the shot while showing off the sunny hue. The soft and loose lob waves fall around her face and frame it beautifully.

Followers were all about Perry with longer locks and they absolutely loved this look. One user commented, "Yay she's got her long hair back," while another said, "Yas queen long hair don't care."

Clearly, a Katy Perry hair change is cause for chatter among Katy Cats, who are full of opinions. Not only were they vocal in the flurry of comments, but the post also generated over 2.5 million likes in just two days.

Perry posted another photo to Instagram a day later, showing off shiny pink waves while at Disney with her fellow American Idol judges. Obviously, the singer is having fun experimenting with her locks again.

Remember when she owned this gorgeous, head-hugging bob in golden and pink tones back in 2011?

Perry debuted this textured blue bob at the 2012 Grammys.

Perry has had several pitstops at blue. This major, mega long ponytail with blue and purple strands, worn at the 2012 Kids' Choice Awards, was unforgettable.

This glossy black bob with bangs from 2014 was retro and fabulous.

The pixie has also become a Perry signature. She nailed the short 'do when hosting the MTV VMAs in 2017.

Flashback to Perry's 'do in 2009 when her star was on the ascent and her long, wavy follicles and sharp bangs were poppin'.

Ultimately, Katy Perry will always keep us guessing when it comes to her strands. It's always a thrill to see what cut and color combination she will rock next.