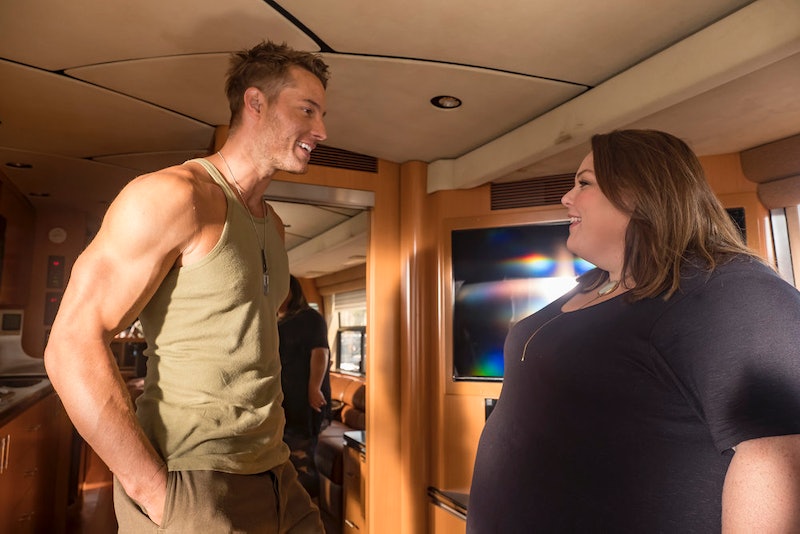 Kevin Pearson is a lot like his father, Jack. They’re both handsome, all-American men who love their families and care a lot about Pittsburgh Steelers football. But they could share something in common that’s not so wonderful — an addictive personality. In the Oct. 10 episode of This Is Us, an old injury of Kevin’s acts up and he starts to take medication for it. Will Kevin become addicted to painkillers on This Is Us?

In the Season 2 premiere of This Is Us, Kevin had a cast on his leg about the time that his father passed away, showing that he had a pretty serious leg injury during or around his high school years. In the present day, Kevin is working on a wartime movie and injured his bad leg (although not seriously, it seems) during filming. After banging his knee and calling his sister to talk about it (who admonishes him to be careful because it is his bad leg), Kevin takes a few pain pills and leaves it at that. Normally, this would be a pretty regular occurrence and not something to take note of, but Kevin isn’t so great about talking about his feelings, and he hides a lot of things from his family, especially when it comes to talking about Jack’s death.

Jack was an alcoholic before his death, and, according to Recovery.org, addictions and substance abuse issues tend to run in families. Just because a family member has an issue does that mean that you will, per se, but it does raise the risks. There’s evidence that Kevin’s high school leg injury could have been the one to end his career in sports. Kevin, who was a star football player that wanted to be on the Pittsburgh Steelers, hurt himself so badly that getting back on the field wasn’t an option. Justin Hartley, who plays Kevin, said as much to Vanity Fair:

A doctor would have prescribed some sort of pain medication for an injury that is bad enough to force a kid not to play sports. As an actor, Kevin’s life is pretty great — at least on the outside. But he still can’t talk about his father’s death, and because his first leg injury occurred at roughly the same time Jack died, Kevin could equate death with his leg injury. Kevin got hurt, Jack died, and Kevin’s life was changed in immeasurable ways. But the thing about pills is that, albeit temporarily, they make the pain go away. If Kevin is taking pills to cure a constantly achy leg, he could also be taking pills to take away the sting of Jack’s death.

Just because viewers haven't seen Kevin take pills at any other time on the show doesn't mean he's not taking them. Kevin could have been taking medication throughout his adult life without the knowledge of his family to cover up both his pain from an old injury and the pain of losing his father at a young age. Or, this re-injury could jump start an addiction. So much of This Is Us is wrapped up in the little clues of the show — star Mandy Moore has said that Kevin's broken leg is one of the clues in solving Jack's death. No single action means nothing on This Is Us — it all adds up to the big picture of the Pearson clan, and this could be a major clue, too.