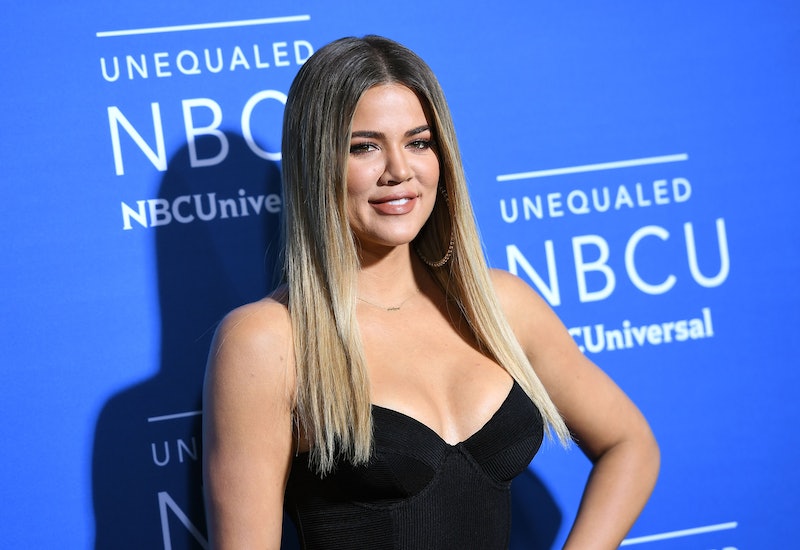 Deep breaths, Kardashian Stans. If you've been torturing yourself over whether Khloé Kardashian is having a boy or a girl at the end of her rumored pregnancy, then it's time to celebrate because that question may have finally been answered. Multiple sources have exclusively confirmed to Us Weekly that Kardashian and Tristan Thompson are having a boy. As Us Weekly have already observed, this would be the celebrity's first child, if the rumors of her pregnancy are true. However, Kardashian has yet to confirm that she's pregnant at all, so these sources' claims should be taken with a grain of salt. (Bustle has reached out to her reps for comment on the latest rumors, but did not receive an immediate response.)

According to the same Us Weekly article, the 33-year-old reportedly visited Cedars-Sinai Medical Center in Los Angeles "for a 20-week checkup on October 9." The magazine also speculates that the rumored pregnancy is the first step for a more serious stage in Kardashian's relationship with Thompson, with an unnamed insider reportedly claiming that "marriage is definitely in the cards," and that "they are just waiting for the right time to move forward. Khloé doesn’t want to rush into anything."

If the rumors really are true, this would make for some crazy timing, coming a little over a month after Us Weekly reported multiple sources had confirmed that sister Kylie Jenner is reportedly also pregnant. (It should be stressed again that Jenner herself has not yet confirmed this news). However, the sisters clearly seem to be enjoying the rumors. When announcing their makeup collaboration via a YouTube video on October 24, Kardashian said of their different lipstick colors, "We created them. It's our baby together. We have eight!" Laughing, Jenner responded "We have so many babies, who knew?"

These pregnancy rumors have also been fueled by Kris Jenner, who told Entertainment Tonight that she was "over the moon for" her daughter and described Kardashian as being in "such a great place in her personal life."

So, who is the man speculated to be the father of Kardashian's rumored first child? According to the TV star herself, during E!'s 10 Year Anniversary Special Of Keeping Up With the Kardashians, she's been dating the NBA player since September 2016 when they met on a blind date. According to INSIDER, Thompson originally hails from Toronto and played basketball at the University of Austin in Texas for a year before going pro, declaring for the NBA draft in 2011. The athlete has been with the Cleveland Cavaliers ever since. He's already a proud dad, with INSIDER reporting that he has a nine month old son, Prince, with his ex-girlfriend Jordan Craig.

Whether or not the rumors are true, it's easy to see why everyone's getting so excited. Accoding to E! Online, in June 2017, on Keeping Up With The Kardashians Season 13 Episode 14, Khloe confessed "Tristan and I definitely talk about starting a family. He wants to have five or six kids with me and that's lovely." She also said "knowing I'm not on birth control is just like — it's scary. It's like a really big step."

Similarly, in an interview with The Daily Mail's You magazine in August 2017, Kardashian explained she wanted both marriage and kids. She told the magazine, "I definitely want a family, but I don't feel any pressure," called her partner a "great dad," and also revealed Thompson also wanted more children. In the same interview, she confessed that the highlight of her year at that point was the birth of her niece Dream, Blac Chyna and Rob Kardashian's daughter, saying, "I melt when I see him with her because he's a phenomenal father, just like my dad was."

If the rumors are true, it sounds like Kardashian will be a very enthusiastic and loving mom. But until the woman herself confirms the news, fans should stay wary: this is all just speculation at this point.