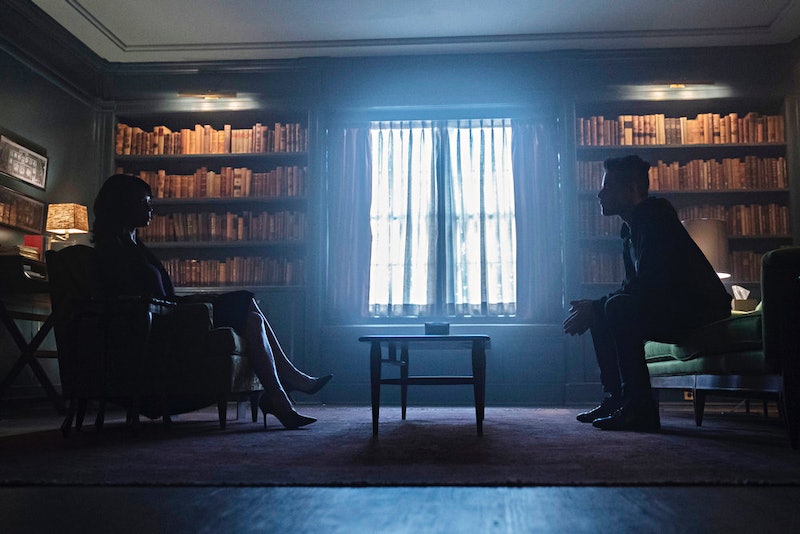 One of the only givens on Mr. Robot is that Elliot is an unreliable narrator. And one of the only people who consistently attempts to help Elliot is his therapist Krista, portrayed by Gloria Reuben. But it's pretty miraculous that she's still working with him, so is Elliot really talking to Krista on Mr. Robot Season 3? Mr. Robot speaks directly to Krista in "Eps3.1undo.gz" at her home office and if you have never been wary of Krista before, you may be now. Even though her sessions with Elliot in Episode 2 of Season 3 appear to be breakthroughs — albeit quite ominous ones as Elliot shares the mysterious story of him falling out of the window as a child and Mr. Robot threatens Krista — there's always a reason to think that things are not as they seem when it comes to Elliot's interactions, and his recent time with Krista is certainly no exception.

While Elliot misled viewers in Seasons 1 and 2, you may find yourself being lulled into a false sense of security in Season 3. But the back-to-back plot twists in the previous two seasons are proof that you should question everything and after "Eps3.1undo.gz," I am questioning Krista. And since you won't have to spend any additional time thinking about what Joanna Wellick is up to since her jealous boyfriend shoots and kills her in the Oct. 18 episode, you can use that extra mind space to try to figure out what's really going on between Krista and Elliot (and Mr. Robot) during his therapy sessions.

Krista has been Elliot's court-appointed therapist since Season 1 and she stuck around when Elliot was in prison during Season 2. While Elliot lied to viewers by saying he was staying at his mom's house, it was Krista who was responsible for breaking the illusion for the audience in "Eps2.5h4ndshake.sme." Interestingly enough, Elliot's involvement with Krista was the reason that Elliot was in jail in the first place since he hacked her boyfriend Michael (whose real name is Lenny) and Lenny reported Elliot to the police. It's also probably no coincidence that Lenny returns in the same Season 3 episode as Krista when he gives his dog back to Elliot.

In "Eps2.5h4ndshake.sme," Krista stated that she wanted Elliot to continue to see her regularly at her office after he was released from prison. Elliot appears to be abiding by that request in Season 3, but her home office casts some suspicion on their relationship. Although there's no hard evidence, her spacious home office seems eerily too perfect, with her bookcases organized by color. Just like there was something off with Elliot's mom's house in Season 2, there is something off about Krista's office in Season 3. This setting change could be an indication that creator Sam Esmail's twist this season will have to do with Krista.

Even before Krista's Season 3 appearance, she was a source of speculation for fans. Reddit user aveyard posted 8 months ago, "I don't think Krista is as real as we think she is." They pointed out that both Krista and Elliot used the term "slippery slope" in the Season 1 premiere, which could be a hint that Krista is not really there, but an element of Elliot's own personality — just like Mr. Robot.

"Krista isn't treating Elliot. She knows he almost definitely has dissociative identity disorder as she knows about Mr. Robot and yet she's done very little. She hasn't diagnosed him any differently since that revelation. She's remained his therapist even after the 107 reveal that he hacks her. She doesn't seem to be actually helping him. Perhaps she's a handler of sorts? Elliot was assigned to her after his incident. Perhaps who he was assigned to wasn't an accident?"

That led to user kiitsmotto saying that Krista and Angela shared a lot of similarities in the first episode of the series. So, like Angela, is Krista also Elliot's handler? Or, taking this one step further, could Angela and Krista be the same person?

Although it's a far-out theory to say that Krista is really Angela, hardly anything is out of the question with Mr. Robot. And it's worth noting that both Elliot and Mr. Robot spoke to Angela in the Season 3 premiere, while Krista is the person they both speak to in Episode 2 and Angela is barely present. That's not to say that Krista has always been an amalgamation of people in Elliot's mind, but it could be the case specifically in Season 3.

But regardless if any of these theories turn out to be true, Esmail has given fans enough of a reason to pay very close attention to Krista's therapy sessions with Elliot and Mr. Robot. Because if Elliot is going to lie to the audience about anything, it's most definitely the state of his mental health.

More like this
Glenda Cleveland Died 2 Decades After Trying To Turn In Neighbor Jeffery Dahmer
By Brad Witter
'Reservation Dogs' Season 3 May Finally Mend Bear & Willie Jack’s Relationship
By Gretchen Smail
'Grey's Anatomy's New Intern Got Advice From Dr. Bailey Herself
By Grace Wehniainen
Caleb McLaughlin Details Racism From 'Stranger Things' Fans
By Radhika Menon
Get Even More From Bustle — Sign Up For The Newsletter