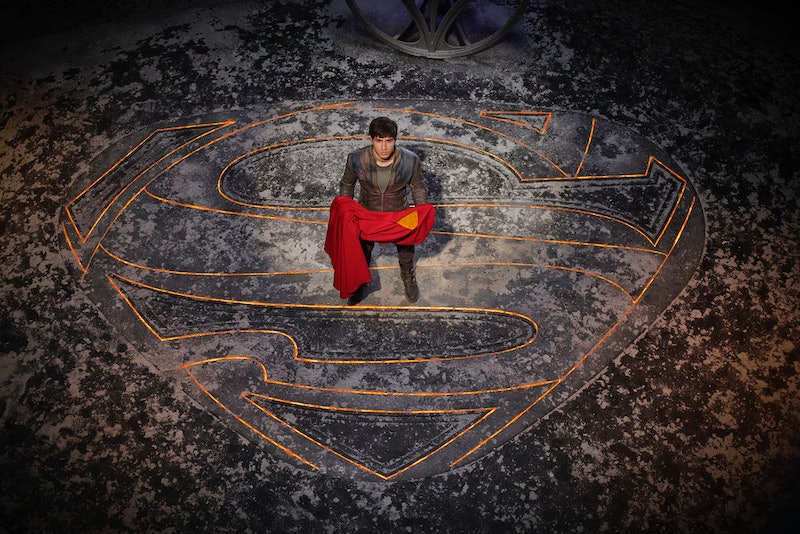 Syfy's Krypton, premiering March 21, is a new series that explores the life and legend of Superman's grandfather Seg-El. Superhero shows based in this universe's mythology aren't uncommon; Supergirl, Smallville, The Adventures of Superman, and Lois & Clark are all examples. But this new series is working in uncharted territory. Krypton isn't based on a specific DC comic, though the setting and several characters come from the DC universe.

The Syfy synopsis reads, "Set two generations before the destruction of the legendary Man of Steel’s home planet, Krypton follows Superman’s grandfather, whose House of El was ostracized and shamed, as he fights to redeem his family’s honor and save his beloved world from chaos." So this is a Superman prequel of sorts, wherein Superman isn't even a character.

Executive producer Cameron Welsh (who created the show alongside Damien Kindler) told TVLine at San Diego Comic-Con why they chose to jump two generations away from Superman himself for their storyline. He said:

"There is some existing cannon obviously for Krypton but most of that centers around Jor-El (Superman's father). And to sort of be able to like take it another generation removed from that, it opens it up for us and allows us to have sort of endless possibilities for what we can do. Which is great, we can kind of have our own field to play in. But we can also deepen the existing mythology."

Seg-El, Superman's grandfather, does exist in the comics, where his name is spelled "Seyg-El." And this DC history up until now mainly focuses on his contentious relationship with his son Jor-El. Played by Cameron Cuffe in the show, Seg-El is a young man who's much more of a rule breaker than the comics version.

Promos for Krypton, shown above, set up a traveler from "the future," warning Seg-El that he is in danger because someone wants to destroy Krypton in order to stop Superman from ever becoming Superman. The mysterious traveler is Adam Strange, a character with a history in the comics. Strange works with Superman in the comics occasionally and is also a hero. But in setting him up as someone from the future who must fix the past to save the present, is the show taking creative license with Strange.

And Strange is a good model for how the show will play around with canon. Of course, the most significant overlap between the two forms is the planet Krypton itself. The planet has a long history in the comics, appearing first all the way back in 1939 in Superman #1. Executive producer Kindler talked about Krypton's connection to the stories fans already know in the same TVLine interview, saying:

"It is a big extension of the DC universe. And we are playing on a way to challenge what people think they know about Krypton. Bringing characters you would not expect but you recognize. And to play those big DC moments as much as we can, as early as we can and often. That's a big part of the show's identity."

The producers have been relatively tight-lipped so far about which specific characters will appear that fans would recognize from the comics, and even Seg-El is a somewhat obscure reference. Seyg-El first appears in the 1988 comic World Of Krypton Volume #2. In that comic he is listed as a supporting character with his son Jor-El taking the leading role. His own youth has never been explored.

Also present in Krypton is the big bad Brainiac, who appears in a slightly different form in the comics. In the promo above, Geoff Johns, the chief officer at DC Entertainment says, "We really decided to take a run at making [Brainiac] colder and more emotionally distant. And ancient."

The comic Brainiac first appeared in Action Comics #258 in 1958, as an android being with the power of advanced intellect and a flair for martial arts combat. It appears though, that the show's version (played by Blake Ritson) may rely mostly on his intellect.

While Brainiac may be in new form, a comic version of him has waged war against Krypton before. Brainiac attacked the Krypton city of Kandor in the comics, shrinking the city using his "Hyper-Ray." There's no evidence that this is how his plan will play out on the show, but it is interesting that there is not only a big bad overlap but a battle overlap. Interestingly, in the comics, Superman is the one who eventually restores Kandor back to normal size.

The show has plenty of history to draw on and also plenty of new territory to explore. By jumping back in time to Seg-El's era, the show has created space to form its own identity separate from the comics, while using the rich mythology the source material provides. Both fans of the Superman comics and fans of unique sci-fi TV can get excited about Krypton.

More like this
Netflix Shut Down 'Bridgerton' S3 Rumours About A “Very Dark” Storyline
By Bustle
This 'Gossip Girl' Wardrobe Error Has Gone Viral On TikTok
By Alyssa Lapid
'The Last Of Us' Has Officially Been Renewed For Season 2
By Darshita Goyal
Everything To Know About 'RHONY' Season 14
By Jake Viswanath, Alyssa Lapid and Brad Witter
Get Even More From Bustle — Sign Up For The Newsletter
From hair trends to relationship advice, our daily newsletter has everything you need to sound like a person who’s on TikTok, even if you aren’t.