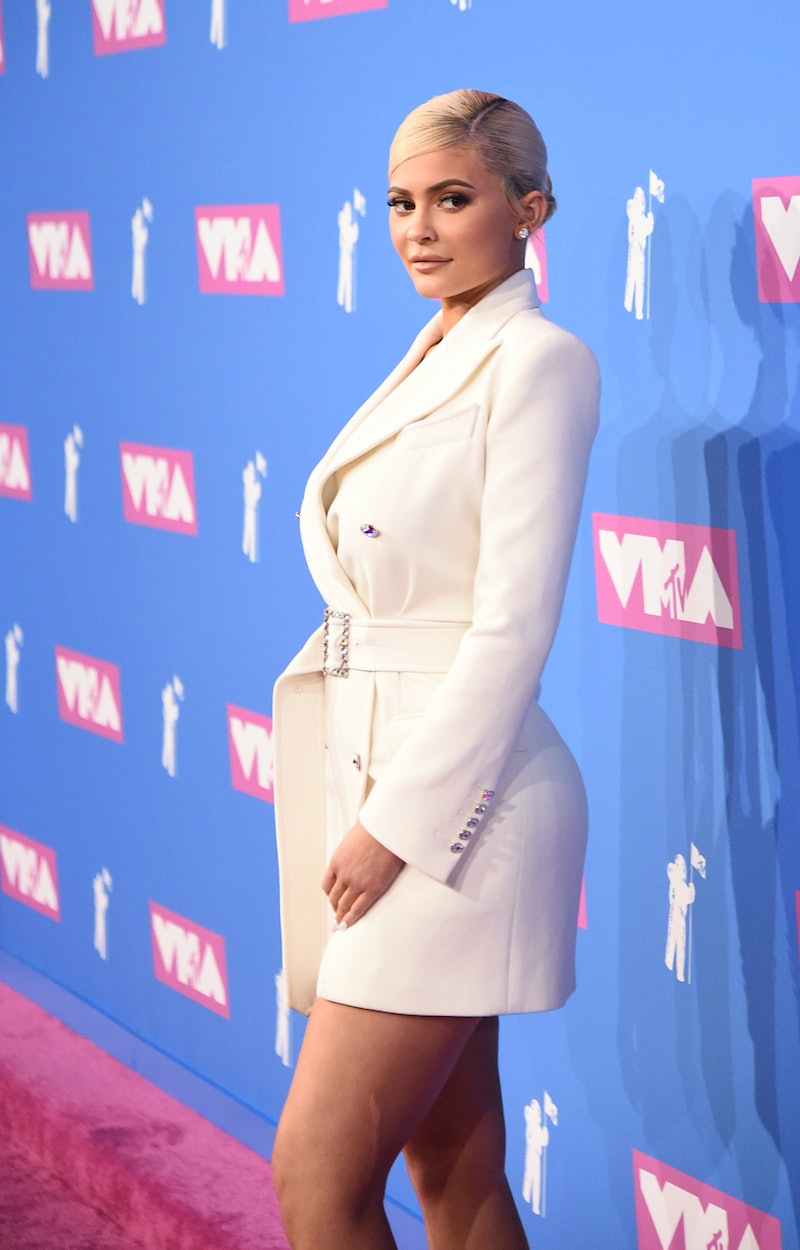 She has been a hair chameleon who changes hues, shapes, and length for quite some time — thanks to assists from wigs and her glam squad. But Kylie Jenner has blue hair now and it's the most winter-ready shade. The Kylie Cosmetics guru debuted the perfect cold weather color on her Instagram and immediately garnered over 5 million likes. While Jenner has rocked blue hair many, many times in the past, this is the coolest blue tone she has done in quite some time.

This icy blue hue essentially matches the chill in the air in most of the country and on the horizon for the next two months.

Stormi's ever-stylish mom has been known to favor a teal blue 'do and she has previously worked mermaid-inspired, aqua locks. While she has been platinum blonde for the latter half of 2018, Jenner has made a prolific pitstop at a powder blue shade that goes right down to the roots. It looks gorgeous when paired with her statement brows and signature, nude matte lips.

Is it real? We may never know. But it's very likely the work of a wig or a temporary tint. While Jenner crushes and slays blue follicles, she does have a tendency to switch things up with incredible frequency. So gawk at these strands while you can — they could go buh-bye before you know it.

For much of December, Jenner has been rocking white hot blonde hair in a shoulder-skimming length.

However, as mentioned, Jenner has opted for baby blue locks in the past. This particular blue 'do appears just a touch more pale and a bit softer than what she's rocking ATM. Then again, it could be the work of lighting or an Insta filter. That said, she really knows who to incorporate blue strands into her OOTD and overall vibe.

This super long, super mermaid, and mega wavy mane dropped back in 2015 — nearly four years ago. Wow. Just.. wow. But she has experimented with several other tones and gradations of the shade.

The Kylie Cosmetics makeup mogul was all about teal-tinted strands earlier this decade. She opted for a straight lob and paired it with mega goth, black x blue lipstick.

If you look really, really closely at this shot, you will notice a subtle, navy blue cast to Jenner's one-time signature black locks. You will detect the navy thread close to the center part in her hair. Go ahead — zoom in.

The reality star had a thing for long, ombre strands, too. This dip-dyed look was awesome and kept her dark roots in tact.

Jenner was all about the two-tone hair. She played with the same color combo — ombre teal and black — in a much shorter style.

See what I mean about Kylie Jenner being a coif chameleon? She doesn't just change colors often. She changes the shape and length, as well. She hasn't done icy blue in a minute so it's a welcome return for that color and just in time for January's bitter freeze.

Will it last? That's anyone's guess.