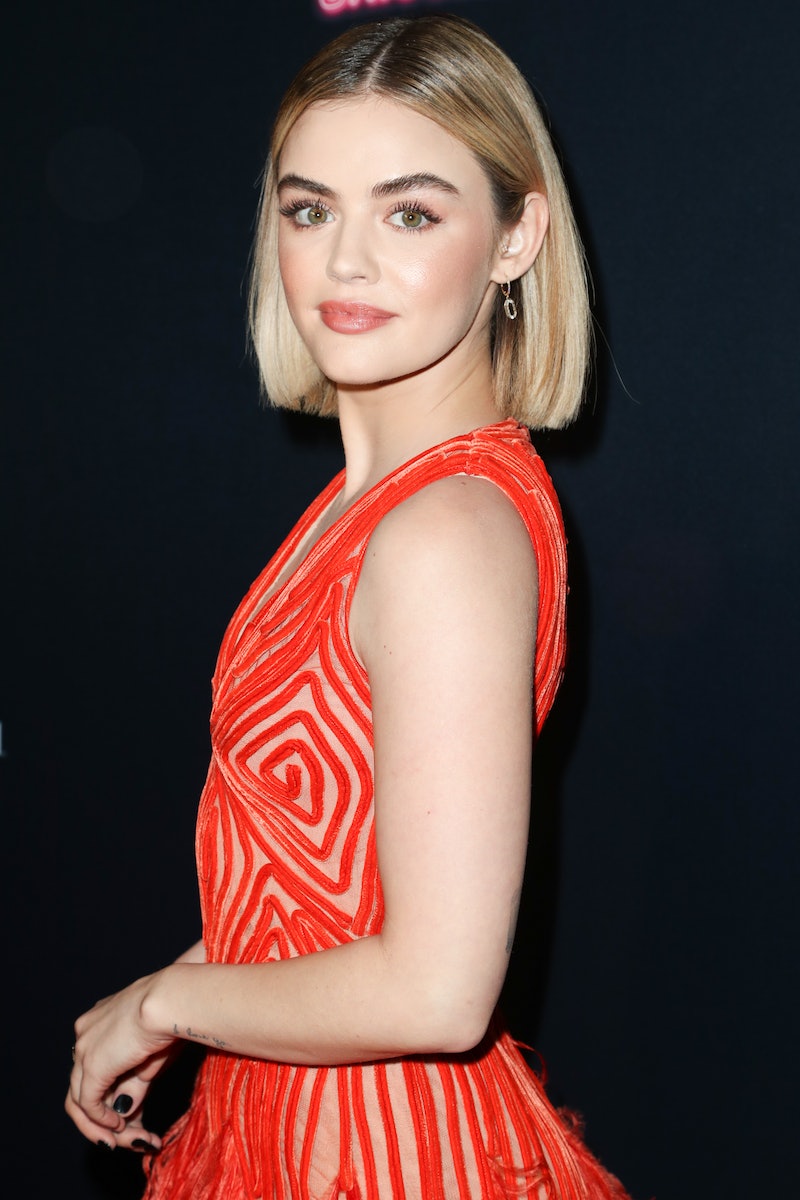 Valentine's Day has passed, but Instagram influencers from around the world spent the holiday online to share how important it is to share the love one has for themselves. Lucy Hale debuted a new Valentine's Day tattoo as her way to tell the world she loves herself, and she and the tat win the award for cutest couple.

While some singles spend the lovey doviest day of the year in solitude, others have turned Valentine's Day into a message for singles to think of themselves first, and Lucy Hale's tat is her own constant reminder. The former Pretty Little Liars star shared a moment of honesty with her fans on Instagram, sharing a photo of a tattoo she'd recently gotten.

When Hale posted the photo, the tat shows a set of arms, one in red ink and the other in black, wrapping themselves around each other as the arms hug to form the shape of a heart. If you're a fan of minimalist tattoos, then you might want to steal this bit of tattoo inspo for your own skin. No one had noticed the the actress' new ink since she'd placed the tattoo above her right elbow, making it hidden from view anytime the star wore sleeves. Please go bare-armed more often, Lucy.

"Soo here’s the deal...I got this tattoo recently as a symbol of self love. And that’s what this last year has been about...being alone (but not lonely), not settling and truly finding my inner light & loving who I am," she captioned the photo. "I am so happy with the place I’m in and unbelievably grateful for the overflowing love I have in my life from my family and friends."

Hale revealed in the caption that while she's riding solo this year, she's too happy about single life than to be bothered about it, and it's the kind of energy more singles should hone into their grasps.

The actress tagged Frédéric Forest as the artist behind the sketch and tattoo artist Rob Greene to execute the artwork. The two together make a great tattoo and fans of Hale wrote in their praises in the comments.

"I haven’t ever really liked tattoos but I’m in lovve with this one. It has soo much meaning and it will bring you happiness and self confidence," one fan wrote, candidly.

"What a wonderful tattoo might as well get it right now for myself," another fan commented in approval of the ink.

Only super fans of Hale would know that the actress even had tats in the first place since most of them aren't obviously displayed on her body, however this is far from her first one, let alone one that's as empowering as her latest arm embrace tattoo.

Back in September of last year, Hale had enlisted the help of Los Angeles-based tattoo artist Winterstone, who's also responsible for Lady Gaga's A Star Is Born Tattoo, to tat up Hale's forearm with "love her but leave her wild."

The next you're looking into inspiration for a new empowering minimalist tat, be sure to hit up Lucy Hale's arm work first for reference.