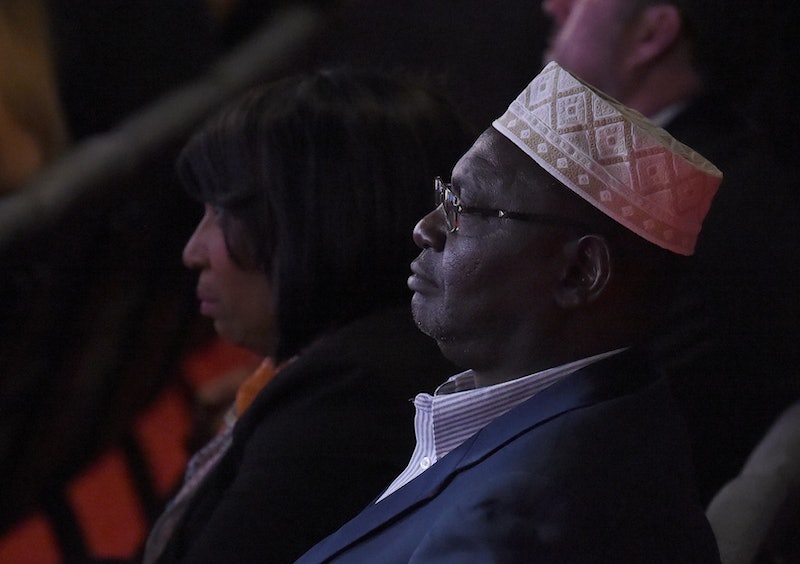 In the weeks leading up to Donald Trump's inauguration on Jan. 20, the guest list has been the subject of plenty of speculation. Although he has seemingly had difficulties finding entertainers willing to perform at the event, numerous conservative figures plan on attending. But will Malik Obama be at the inauguration? President Barack Obama's half-brother attended the final presidential debate in Las Vegas at Trump's request, but so far, there's no word on whether he'll attend the president-elect's inauguration — we'll have to wait and see.

Aside from a GQ profile in 2013 and some trouble with the IRS in 2011, Abon’go Malik Obama flew under the radar for most of his half-brother's presidency. Born in Kenya in 1958, he has worked in the United States for years and is a naturalized citizen. In fact, he's registered to vote in Maryland, and in November, he proudly cast his vote for Trump. Shortly before the election, he laid out his reasons for supporting Trump in an essay published in the New York Post. After criticizing Barack for being a "big disappointment" and accusing Clinton of allegedly being a "liar and totally corrupt," he wrote, "Mr. Trump is a successful businessman. He will make America great again. He is not heartless."

His Twitter bio emphasizes his political leanings as well. "Now that my brother's term is ending I am free to declare my support for Donald J. Trump President-elect of the U.S.A.," it reads as of this writing.

According to the Washington Post, Malik and Barack's relationship was once closer than it appears to be these days. When Barack married Michelle Obama, Malik was his best man, but in the aforementioned GQ profile, he said they only speak about once a year. In July, Malik came out in Trump's favor, and now, he's an active Twitter user popular among the "alt-right", tweeting memes and political statements.

Given his presence at the presidential debate in October, his staunch support of the president-elect, and the comparatively small number of people expected to show up to the event itself, it's not unreasonable to assume Malik might make an appearance at the inauguration. If he does show up, he's likely to run into Barack Obama, who will definitely be in attendance. Talk about awkward.

More like this
Tyra Banks Flubbed The Name Of Charli D’Amelio’s Boyfriend On 'DWTS' Bond Night
By Jake Viswanath
The Try Guys Clarified Ned's Cheating Scandal Timeline In A New Video
By Grace Wehniainen
The 'GBBO' Mexican Week Controversy, Explained
By Sam Ramsden
Nicola Coughlan Addresses 'Bridgerton' Season 3 Backlash
By Sam Ramsden
Get Even More From Bustle — Sign Up For The Newsletter