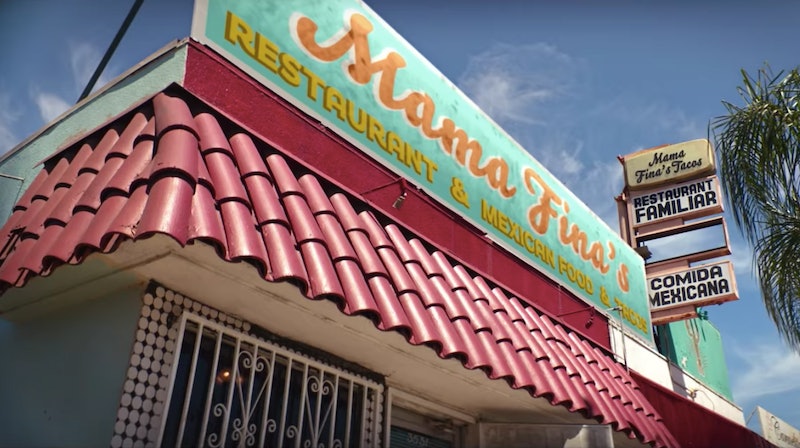 Netflix's Gentefied centers around the three Morales cousins, but their family restaurant Mama Fina's Tacos also plays a vital role in the series. Although their grandfather — whom they simply call "Pop" — currently runs things, Ana, Chris, and Erik know they will have to take over their abuelo's taqueria one day, which they all have different ideas on how to save. But while the Gentefied restaurant Mama Fina's isn't real, it stands in for other Californian Mexican joints.

There is a New York restaurant called Mama Fina's House of Filipino Sisig, but the cuisines (and coasts) are obviously different. The taqueria may remind SoCal residents of other local businesses, however — like the Dominican restaurant in the nearby Bellflower called Mamá Fina, which has since closed. The L.A. fixture Worldwide Tacos may also seem familiar to Insecure fans, which Issa Rae's character frequents in Season 2.

Much like in the show, Boyle Heights is in the midst of gentrification. According to a January 2019 piece from Vice, millennials have begun to price out the L.A. neighborhood's Latinx community. The article points out that the local wine bar Eastside Luv features something called MariachiOke, where participants sing traditional mariachi songs at karaoke. (This is similar to Javier's storyline in Gentefied, in which he and his mariachi band must update their song catalogue to retain relevancy.)

In Gentefied, this has caused Mama Fina's rent to shoot up with no sign of slowing down. So it's no wonder that Pop's grandkids are trying to get him to update his taqueria for the 21st Century — even if he gets there kicking and screaming. Much of his stubbornness stems from the fact that his late wife, the titular Mama Fina, helped him with the restaurant, which they established in 1980. Since she hand-painted the menu herself, Pop understandably balks when his grandson replaces it with a more modern design.

Their regulars are similarly frustrated when Mama Fina's begins upping its prices and charging for chips and salsa, which used to be complimentary. "$5 for one burrito?!" Javier balks, reminding them that he used to literally sing for his food.

Since Chris is an aspiring chef, he gives Mama Fina's a culinary makeover. However, many of his fusion flavors are declared not to be real Mexican food. Still, it's obvious that both the employees and the customers at Mama Fina's need to evolve in order to survive the unfortunate changes that are rocking their small, tight-knit community. In the meantime, if you're in the area, you should definitely grab a torta or a taco at one of the other Boyle Heights restaurants that Mama Fina's is based on.

More like this
UK Audiences Will Soon Be Able To Watch 'The Bear'
By Frances Stewart
Here's What Jeffrey Dahmer's Dad Has Said About His Other Son, David
By Grace Wehniainen
Where Is Lionel Dahmer Today? Jeffrey Dahmer’s Father Reflected On The Serial Killer’s Death In 2020
By Brad Witter
Glenda Cleveland Died 2 Decades After Trying To Turn In Neighbor Jeffrey Dahmer
By Brad Witter
Get Even More From Bustle — Sign Up For The Newsletter