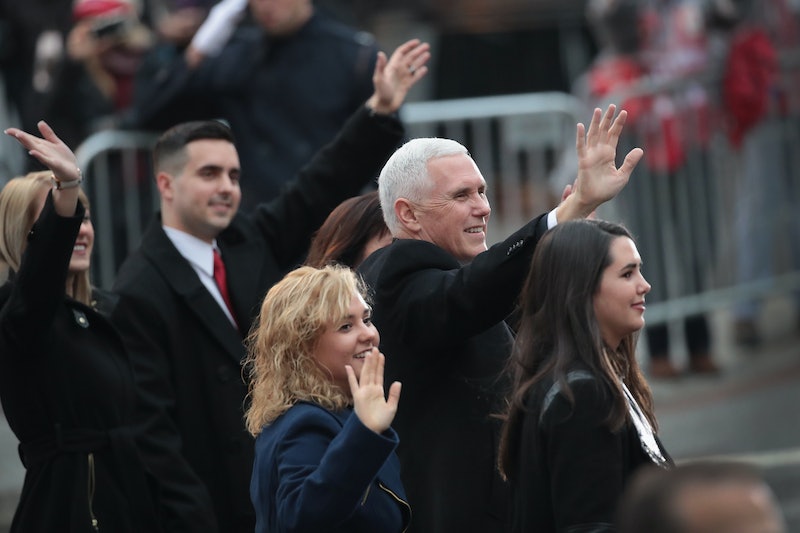 As he begins his role as vice president, Mike Pence is facing new attention — as is his family. While youngest daughter Audrey may have gotten the most for her (relatively) liberal stance, many have wondered about the vice president's one son. Michael J. Pence is a Marine. Although Michael attended his father's inauguration in Washington, D.C. last weekend, Pence is still a member of the Marine Corps, where he is a second lieutenant. He was previously stationed in Pensacola, Florida, at the Naval Air Station, where he was receiving flight training to learn how to fly a T-6 B Texan II plane. The younger Pence, a graduate of Purdue University in his native Indiana, is currently stationed in Mississippi, at the Naval Air Station Meridian. His parents spent Thanksgiving visiting him in the Magnolia State.

Michael Pence also attended an interfaith service the weekend of the inauguration along with his parents and fiancee, Sarah Whiteside. Pence met Whiteside in 2013 in a political science class at Purdue.

Michael Pence's two sisters, Audrey and Charlotte, attended Hanover College and DePaul University, respectively. As mentioned above, Audrey reportedly considers herself to be socially liberal, but voted for her father during his gubernatorial campaign.

Though the vice president has long served as an elected official for the state of Indiana, the Pence children did not always grow up there. The family moved to Washington, D.C. for a while when Pence was serving as a congressman — a "decision [Mike Pence's wife, Karen] never regretted," according to the Southern Indiana News & Tribune. In 2013, Michael told WHTR that he and his sisters have "seen some cool things in D.C." but that they otherwise had a normal life.

Michael Pence appears poised to continue his military service throughout his father's time as vice president.