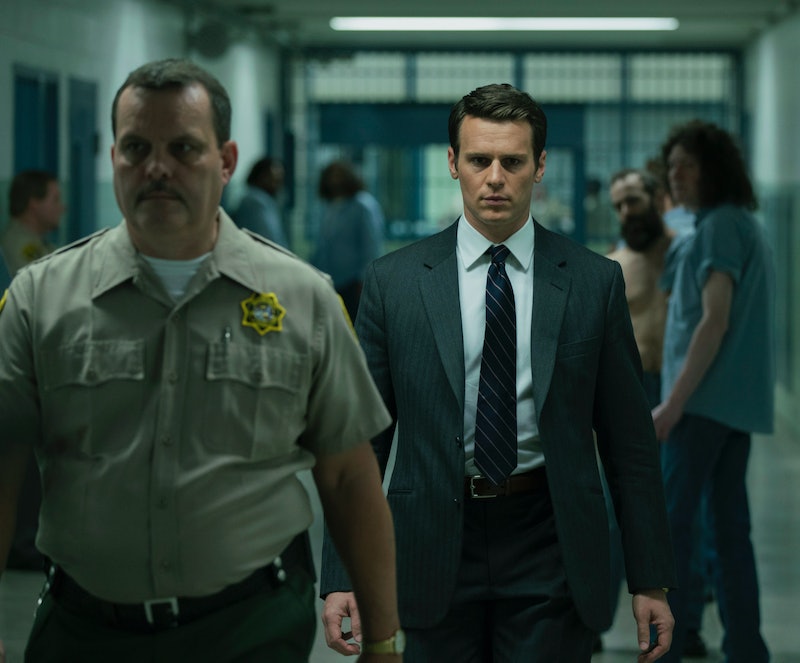 After debuting talked-about true crime docuseries like Making A Murderer and The Keepers, Netflix is continuing its endeavors with Mindhunter. The 10-part drama, starring Jonathan Groff (Glee, Frozen) and Holt McCallany (Lights Out, Blue Bloods) will focus on two FBI agents in the 1970s who get their hands seriously dirty in order to understand the inner workings of notorious serial killers' minds. It's certainly a realistic plot, but is Netflix's Mindhunter based on a true story?

Yes and no. While the characters — Holden Ford (Groff) and Bill Tench (McCallany) — are fictional in name, the general plot is based on a book co-written by real life former FBI operative, John Douglas. Douglas worked with the FBI for 25 years in its Investigative Support Unit, and has interviewed infamous serial killers like Charles Manson and John Wayne Gacy, his website states, always with the intention of better understanding their motivations. His website claims he is also the inspiration for the character of Jack Crawford in the classic horror film Silence of the Lambs.

Mindhunter: Inside the FBI's Elite Serial Crime Unit, which he wrote with filmmaker and author Mark Olshaker, was published in 1996, and is now the basis for the Netflix series. While the show's namesake book will surely provide the backbone of the premise, USA Today reported that the show is only based on Douglas' and Olshaker's work "in part." Mindhunter is executive produced by both David Fincher (Gone Girl) and Oscar-winning actor Charlize Theron, so the creative juices are flowing. Fincher told Charlie Rose, as reported by IndieWire, that what intrigued him about the project is the idea that regular people can't possibly fathom what goes on the mind of someone like this.

“To me these are very sad people under who have, you know, grown up under horrendous circumstances,” Fincher said, per IndieWire. “This is not to overstate how much empathy or sympathy we should have for them but it’s just simply a fact … We’d seen so much of this sort of literary conceit of, there’s a very fine line [that] separates the hunters from the hunted. And I really thought it was time to sort of take that back and make it, really, the reason that we are fascinated with them is because we’re nothing like them. They are unfathomable.”

This isn't the first time Fincher has strolled into dark territory for a project. Aside from Gone Girl, he's also an executive producer for House of Cards, and is the director behind classic films like Fight Club and Se7en. One project, he said, may have prepared him a little more than the others. He directed Zodiac, the 2007 film starring Jake Gylenhaal, Robert Downey, Jr. and Mark Ruffalo, based on the real-life Zodiac killer that terrorized Northern California in the 1960s and 1970s. Though the film still grossed over $33 million, Fincher said he realized that it's a big commitment for audiences to sit in a movie for hours and wait for a payoff that's not really coming — the Zodiac killer was never apprehended.

“I learned my lesson with Zodiac," the filmmaker said in the same Charlie Rose interview. "You can ask a lot of an audience, but two hours and 45 minutes and no closure is probably — ‘Yes, get a babysitter; yes, find parking; yes, wait in line; yes, sit and have people with their phones on in your peripheral vision and concentrate for two hours and 45 minutes,’ is asking a lot.”

He won't have at least some of this problem with Mindhunter when it premieres on Netflix on Oct. 13. From the comfort of their own homes, audiences can move through the mystery at their own paces, pick up clues to piece together the plot along the way, and take any necessary breaks they need — it is a show about murder, after all. That could get taxing. But from the looks of the many trailers Netflix has dropped in anticipation of the premiere, it's easy to imagine most will stay glued to their screens no matter where they are.

More like this
‘Squid Game’ Creator Hwang Dong-Hyuk Just Dropped A Major Season 2 Tease
By Brian Anthony Hernandez and Bustle Editors
The First Clip From Netflix’s Queen Charlotte ‘Bridgerton’ Prequel
By Bustle Editors
Nicola Coughlan Shared A Lady Whistledown Excerpt From ‘Bridgerton’ Season 3
By Grace Wehniainen, Alyssa Lapid and Sam Ramsden
'Elite' Season 6 Is Arriving Sooner Than You Think
By Gretchen Smail and Grace Wehniainen
Get Even More From Bustle — Sign Up For The Newsletter