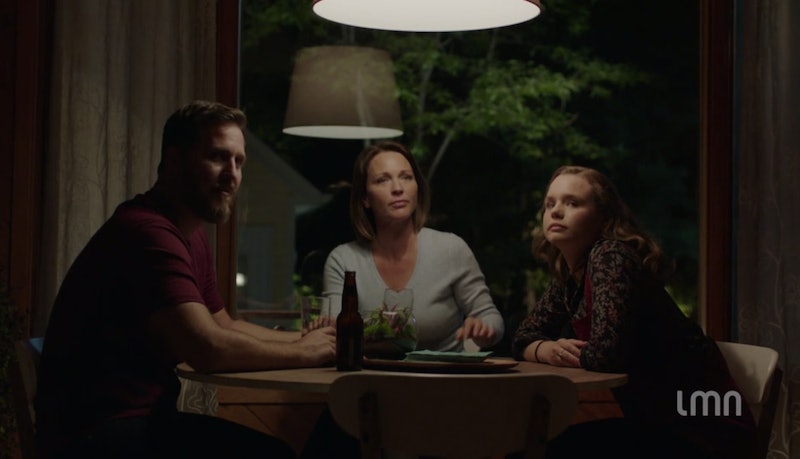 Mother's Day is just around the corner, and what better way to start getting in the spirit than by taking in some entertainment with some strong maternal themes? Well, look no further than LMN, which will be premiering a new movie that revolves around a mom, her family — and her dark past. Mommy's Prison Secret premieres on Friday, May 5 at 8 p.m. ET on LMN, and it looks like your typical scandalous film fare that you come to expect from this network. So does that mean Mommy's Prison Secret could be based on a true story, like so many movies that have come before it on LMN and Lifetime?

Taylor Reynolds, a typical suburban mom, made some bad life decisions and was sentenced to three years in jail for a DUI and possession of drugs. After her release, Taylor fights the stigma of her past misdeeds, works to regain the support of her daughter Bianca and husband Jeff, and once again becomes a contributing member of society. But just when Taylor's life is getting back on track, her former cellmate and career criminal, Meghan Flanagan, unexpectedly appears and invades Taylor's world. Meghan has a devious plan. She wants Taylor to come clean and confess the truth behind her early release. Taylor will stop at nothing to keep her family safe from Meghan, even if it means stepping back into the world she ultimately escaped.

And if you watch the preview for Mommy's Prison Secret, which has the alternate title of Early Release, you'll see that Meghan (Sarain Boylan) turns Taylor's (Kelli Williams) life completely upside down. Entertaining Mommy's Prison Secret looks, but based on a true story it does not seem to be. There's no language in the movie's synopsis or anywhere else that suggests that Mommy's Prison Secret is based on true events, so it seems as though the film is fiction.

However, that doesn't mean a story like the one in Mommy's Prison Secret hasn't hit TV screens already. Why, just last October, Lifetime premiered a movie called Mommy's Secret, which follows a teenage girl who suddenly discovers that her mom is behind a slew of recent bank robberies. Cape Fear is a slightly different movie in a lot of ways, but I have to say that Mommy's Prison Secret did immediately remind me of the 1991 movie about a convict who stalks his former defense lawyer and his family after his release from prison and completely upends his life. The book and 2002 movie adaptation of White Oleander also explores the effect of a mother's prison sentence on a mom and her teenage daughter. In recent years, Orange Is the New Black has painted a raw portrait of what it's like to be a mother before, during, and after doing time.

If you're just looking for more movies and TV shows about moms leading lives of crime, well, those exist, too. The John Waters comedy Serial Mom follows a suburban mom who's also secretly a serial killer. Weeds famously follows an upper middle class mom who sells marijuana to maintain her affluent lifestyle. If you've been digging everything I've mentioned, you might also want to check out the two-part miniseries Dark Angel, which premieres as part of PBS' Masterpiece on May 21 at 9 p.m. ET. It tells the tale of real-life wife, mother, and Victorian serial killer Mary Ann Cotton, who's sure-to-be brilliantly played by Joanne Froggatt, who you may remember as playing Anna Bates in Downton Abbey.

But if you're looking for something a bit sweeter and more sentimental to watch with Mom this Mother's Day, those movies and TV shows are out there, too.

More like this
Another Side Of Rupert Grint
By Maria Sherman
At 28, Rosie Perez Risked Her Career To Stop Playing Stereotypes
By Gabrielle Bondi
Here’s Everything Coming To & Leaving Netflix In February
By Jake Viswanath
Yes, Maurizio Mian's Cult In 'Gunther’s Millions' Was About Eugenics
By Gretchen Smail
Get Even More From Bustle — Sign Up For The Newsletter
From hair trends to relationship advice, our daily newsletter has everything you need to sound like a person who’s on TikTok, even if you aren’t.