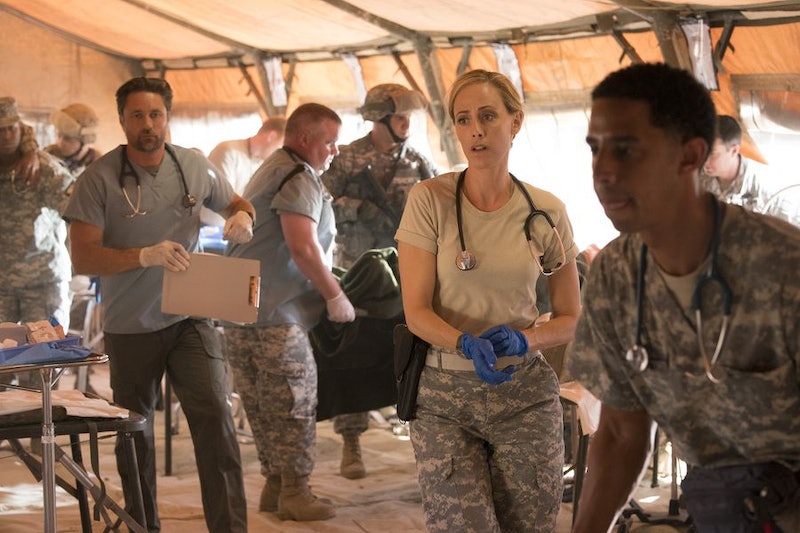 Nothing gold can stay on Grey's Anatomy, and in the case of America's favorite new hunky doctor (and Meredith's, too), that definitely rings true. On the Oct. 26 episode of Grey's Anatomy, Megan and Riggs ran off into the sunset of Los Angeles, leaving Seattle in its wake. Is Nathan Riggs leaving Grey's Anatomy?

The Oct. 26 episode was a capsule flashback episode that basically explained the events leading up to Megan's kidnapping. It all started out nicely enough — Teddy secretly in love with Owen, Owen and Megan ribbing on each other (typical sibling stuff), and Megan and Riggs smooching and getting engaged. All good things. Too bad that Teddy found out that Riggs proposed to Megan with a purloined piece of jewelry from a one-night stand. Not exactly a good look there, Riggs. Recycled engagement gifts are generally a no-no. Megan was also angry at Owen for his not recommending her for a position she really wanted (Owen is, and ever shall be, the worst), and so she jumped in a chopper like Arnold in Predator to get away and was eventually shot down and kidnapped by an Iraqi shooter who disguised herself as a victim.

Flash-forward to circa now, and everything is just dandy. Megan and Riggs are getting a house near the beach, Megan's son Farouk is going to have a better life, and Owen can't deal. If I've ever seen a person less resistant to change, it's Owen Hunt. Eventually, Megan is all, "I'm doing this move because I have a second chance at life," and Owen gets it, and the last scenes of the episode are Riggs, Megan, and Farouk frolicking in the Pacific Ocean. It's a beautiful moment between this new family, OK? But it also means that Riggs and Megan are not looking back to Grey Sloan death hospital.

Creator and executive producer Shonda Rhimes confirmed to Entertainment Weekly that this was the last episode of Grey's Anatomy for Martin Henderson, who plays Riggs. “I loved that we were able to give Riggs a happy ending worthy of his character and talent,” she said in a statement. “As for Martin, this is not an ending for our relationship. He has been part of the Shondaland family since the pilot of Inside the Box and he will always be family. I can’t wait to find a new project to work with him on in the future.”

It's the end for Riggs right now, but that statement gives a nice, open-ended response to Riggs and Megan popping in for a holiday or something. It's not a yes, but it's not a no, and in a world like Grey's Anatomy where people just die all the times, I know that I like a little ambiguity. Callie went to New York and can come back. Stephanie didn't die in that fire. Cristina is still alive and thriving. Grey's Anatomy has so many sad endings that it's nice to have a happy one for a change.

As for Henderson, his IMDB says that he's working on something called Strangers: Prey At Night and another project called Hellbent, so his stint on Grey's Anatomy was probably a reprieve to what feels like some heavy, dramatic work. Not that playing a doctor on Grey's Anatomy isn't dramatic, but there are fewer serial killers at Grey Sloan than natural disasters and plain bad luck.

Megan and Riggs got their happy ending on the Pacific Coast, and now it's time for Owen, Meredith, and the rest of the Grey Sloan staff to do the same. That's the way the cookie crumbles on Grey's Anatomy, and fans will be cheering Riggs and Megan on from afar.

More like this
'Grey's Anatomy's New Intern Got Advice From Dr. Bailey Herself
By Grace Wehniainen
Here’s Everything Coming To & Leaving Netflix In October
By Jake Viswanath
Mike Flanagan Teases 'The Midnight Club' In This Exclusive, Creepy Clip
By Grace Wehniainen
Caleb McLaughlin Details Racism From 'Stranger Things' Fans
By Radhika Menon
Get Even More From Bustle — Sign Up For The Newsletter