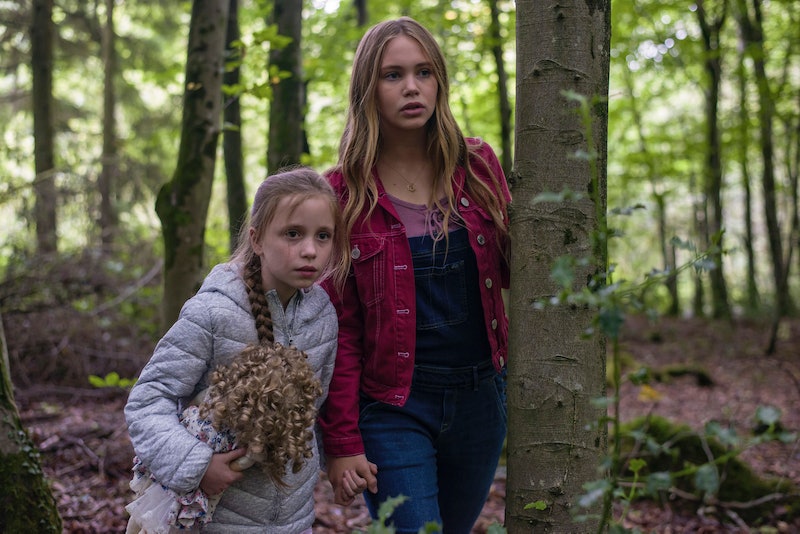 Lifetime is blessing the world on Oct. 21 with a remake of the cult classic '80s Disney film, The Watcher In The Woods. Those who were fans of the original might remember how utterly terrifying this movie was due to Disney's obvious push to aim it towards the older audience demographic. If you're still recovering from the trauma inflicted by the first adaptation of the 1976 Florence Engel Randall novel A Watcher In The Woods, this remake looks like it could be even spookier. And the setting for this spooky tale is Northrop, Wales, so whether or not Northrop is a real town is kind of an important question right now.

As it turns out, Northrop is actually a real village in Flintshire, Wales, across the pond in the United Kingdom. And, based on the village's website, Northrop appears to be extremely historic and undeniably adorable as well. It's the perfect setting for a spooky story requiring just the right ambiance like, say, The Watcher In The Woods. It even has a deliciously gothic medieval church that sits at the heart of the village. Add a legitimate watcher in the woods, and goosebumps are an absolute certainty. But if you can't jet off there to visit it for yourself, the movie will have to do.

The original version of The Watcher In The Woods, released back in 1981, was a gem. It told the story of two young girls who move to the English countryside with their mother and father. The English manor that they move into has some strange things happen inside it and even more strange things happening around it, made even creepier by the landlady whose tragic past includes the disappearance of her daughter in the woods 20 years earlier. This story is rife with supernatural occurrences and endless mystery.

The traumatized property owner, Mrs. Aylwood, was originally played by the iconic Bette Davis, and, according to the movie's website, will be played by the equally iconic Anjelica Huston in the remake. Older sister Jan was played by Lynn-Holly Johnson, but Tallulah Evans, best known for her role in Penelope, will be stepping into the role this time around. As a really fun film fact, the film also starred Real Housewives of Beverly Hills legend Kyle Richards (as a child actress, she was also in Disney's Escape To Witch Mountain), who played Jan's younger sister Ellie; however, the role will now be played by Dixie Egerickx, who was recently seen in National Geographic's Genius.

With Huston signed on as a star, it is already a flick that will catch people's attention. But the remake also happens to have 90s icon, Melissa Joan Hart, sitting in the director's chair. That's right, Sabrina from Sabrina The Teenage Witch will be bringing her witchy ways to a beloved Disney (horror-ish) classic. Hart sat down with Bustle during Comic Con's press day to explain how she fought for 17 years to gain the rights to remake her favorite Disney film:

"Seventeen years later and I’m too old to play the teenage role now, and I’m too young to play Mrs. Aylwood, the older lady, so I directed it. It’s a passion project we’ve been after for a long time."

Knowing that this film is a real passion project for Hart might make it even more special for audiences. So, not only is The Watcher In The Woods a perfectly spooky tale for Halloween, it's actually set in a real place. That certainly adds to the creepy factor when you tune in to watch it Oct. 21 at 8 p.m. on Lifetime.

More like this
These 25 International Horror Movies On Netflix Prove Fear Is A Universal Language
By Bustle Editors
What Does Nancy Jo Sales Think Of 'The Real Bling Ring'?
By The Editors
'Survivor' Is Finally Coming Back To UK Screens
By El Hunt
Netflix Reveals First Look At Wednesday In The 'Addams Family' Spinoff Series
By Bustle Editors
Get Even More From Bustle — Sign Up For The Newsletter