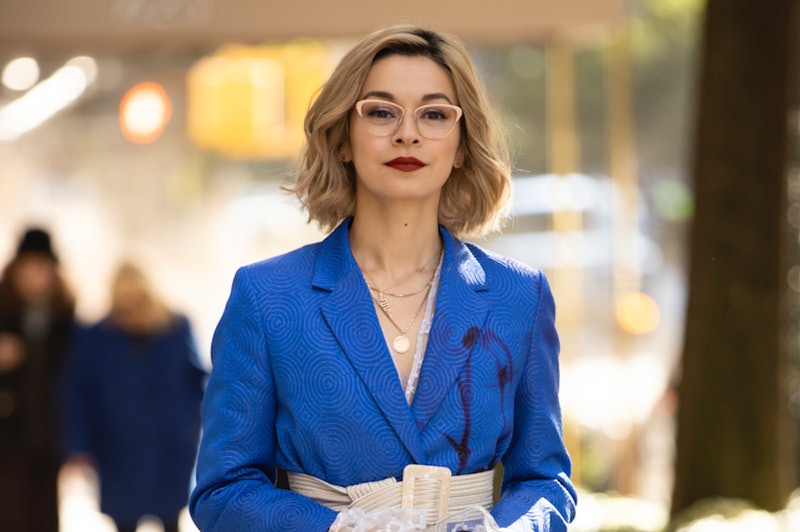 Katy Keene isn't as mysterious as Riverdale, but there's still plenty of secret-keeping going on. In fact, Pepper Smith may be more secretive than anyone on Riverdale. She's tricking everyone into thinking she's a wealthy, carefree socialite, but in reality, she's completely broke. This is a pretty big departure from what happens to Pepper in the Katy Keene comics.

For one, Pepper wasn't Katy's friend in the comics — she was Josie's friend. As executive producer Michael Grassi told Collider, Pepper was a member of Josie and the Pussycats, but she was later kicked out of the band. Per comicbook.com, Pepper remained a main character in the comics until 1969, when Josie's character was reinvented and her new friend Valerie replaced Pepper. After that, Pepper mostly vanished from the Archie Comics universe.

The TV version of Pepper retains the "agent of chaos" personality she had in the comics, as Grassi put it to Collider, but the show "re-imagined her to be a New York It-girl who knows everybody." The only real carryover are her signature cat-eye glasses. "Her iconic thing in the comics is [that] she always wears glasses, so our Pepper wears glasses as well," Grassi told the New York Post.

Beyond that, Pepper is described as a "funny, magnetic life of the party," except that "no one quite knows where she gets all her money — or if she even has any." Katy Keene star Julia Chan likened the character to a mixture of Breakfast at Tiffany's character Holly Golightly and Andy Warhol-era socialite Edie Sedgwick while speaking to TV Insider. But she also sounds a lot like Anna Delvey (real name Anna Sorokin).

Sorokin's story went viral after The Cut published a piece on her in 2018 detailing her various schemes to pose as a German heiress without actually having any money. Like Pepper, Sorokin racked up tens of thousands in hotel bills and skipped out before paying. She also seemingly "knew everyone," and was trying to launch an art-focused club in a multi-million dollar space in Manhattan. That sounds a lot like Pepper's dream of opening The Pepper Plant, an Andy Warhol Factory-type of space for artists.

Sorokin was recently sentenced to four to 12 years in prison and fined over $200,000. She also faces deportation to Russia following the completion of her sentence. It remains to be seen if Pepper will face a similar ending.

More like this
Kidnapping Victim Jan Broberg Is Prepared For A Friend Of The Family Criticism
By Brad Witter
9 Movies & TV Shows That Prove Stanley Tucci Elevates Everything He’s In
By Jake Viswanath and Radhika Menon
Who’s The Richest 'Grey’s Anatomy' Star? See The Net Worth Of Each Cast Member
By Hugh McIntyre
'The White Lotus' Season 2 Trailer Teases Multiple Affairs & Another Dead Body
By Bustle Editors
Get Even More From Bustle — Sign Up For The Newsletter