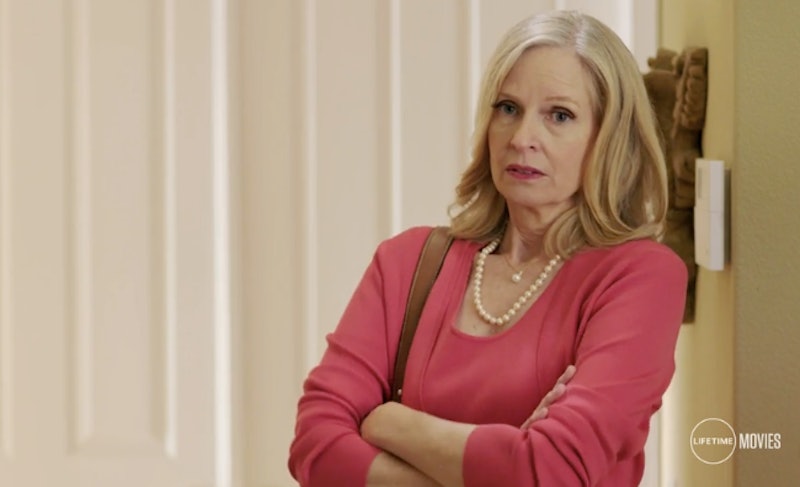 There's nothing the Lifetime network loves more than taking real stories and transforming them into pulpy thrillers, but is their latest, Psycho In-Law based on a true story? While people often have problems with their in-laws, and there's been many a Dear Abby letter written about a troublesome in-law who refuses to respect the boundaries of their child's new spouse, hopefully, most people's troubles only extend to awkward Thanksgiving dinners or difficult birthday gifts, not all-out violence. And there's no indication from the network that this movie is based on any specific real-life situation.

But according to Time Magazine, psychologist Tina Apter's research discovered that "more than 60% of women felt that friction with their husband's mother had caused them long-term stress," while "only 15% of men complained that their mothers-in-law caused them headaches." Apter collected her studies in a book, What Do You Want From Me?, released in 2009. "From women of the older generation, there was a sense of being frozen out of the relationship," Apter told Time. "And from the younger generation, a sense of constant disapproval or intrusion."

Since then, people have continued to post, aided by the anonymity of the Internet, about issues they have with their mothers in-law. Just a week before the Psycho In-Law premiere, one woman in the UK posted on about how living with her in-laws means more help with her young child — but constant judgment and stress. "She constantly tells us what to do," the anonymous poster said. And she's not alone. Rarely does a week on the "Dear Prudence" column pass without a mother-in-law question directed at the current Prudie, writer Mallory Ortberg. A recent letter-writer asked about her MIL's obsession with her cat. Certainly better than an in-law despising you, but also difficult. But in real life, mothers-in-law may occasionally overstep boundaries, but they'll hopefully not take drastic, murderous measures to keep their children from marrying people they don't like.

As for what's happening in Psycho In-Law, let's break down the subtext in Lifetime's summary for the film: "It's been two years since Tina's husband-to-be, Brock, lost his first wife in a tragic accident." The phrase "tragic accident" in Lifetime films usually means that there was some kind of suspicious activity that will be revealed around halfway through the film — the easy money is on the MIL being the evil culprit, but it's also possible that the husband or some other suspect is to blame. "Everyone is thrilled to see Brock so happy with Tina, including his eight-year-old daughter Harper," the synopsis continues. An innocent child? That's likely the stakes that will divide the family, with the father wanting his young daughter to have a positive relationship with both his new wife and his mother, a justification that's actually pretty understandable for the IRL issues that arise in more normal lives.

Anyhow, here's the rest of the summary: "It seems Tina's only obstacle to happily ever after is Joyce, Brock's former mother-in-law, who is determined to stop the marriage and keep Harper to herself. [...] It becomes clear that Joyce will do anything to keep Tina from walking down the aisle." Starting the film before the couple even gets married suggests that it could end with Tina choosing to leave her "psycho" new family members behind.

But however Psycho In-Law ends, there's no need to worry about whether or not the "real" Tina made it out of the wedding with her relationships and life in tact. This Lifetime original movie may be a very extreme version of a relatable story, but it's not ripped from any headlines.

More like this
Blake Lively & Ryan Reynolds’ Relationship Timeline Includes 4 Baby Bumps
By Jake Viswanath
Is The Serpent Queen Based On A True Story?
By Maxine Harrison
UK Viewers Will Have To Wait To Watch The Handmaid’s Tale S5
By Maxine Harrison
Here’s Everything Coming To & Leaving Netflix In October
By Jake Viswanath
Get Even More From Bustle — Sign Up For The Newsletter