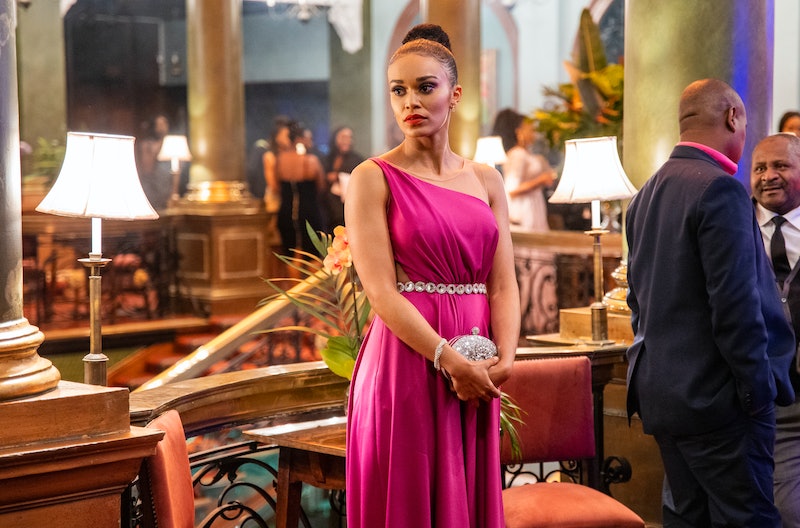 Queen Sono, Netflix's first ever original African TV series, is here and it's an action-packed spy thriller featuring a predominantly South African cast and crew. The show stars Quantico's Pearl Thusi, and while Queen Sono is not based on a real person, she does follow in the pop culture tradition of many other savvy, butt-kicking super spies who bend the rules when it suits them. The team behind Queen Sono is hoping to prove that Africa's film industry is worth investing in, largely by demonstrating how Thusi's Queen Sono can be just as tough and enjoyable to watch as the James Bonds, Jason Bournes, and Eggsys of the world.

Per Entertainment Weekly, Queen Sono was created by Kagiso Lediga and follows the story of South African spy operative Queen Sono, who uses unconventional methods to ensure South Africa's citizens are safe and sound. When the man who killed her mother gets out of jail, it's up to Queen Sono to handle her own unfolding family drama while still living her life of intrigue and espionage.

“With Queen, she’s kind of like an anti-hero," Thusi explained to EW. "She’s trying to live according to her own rules, so she bends the rules where she can and lives on the edge. She enjoys that."

Erik Barmack, Netflix’s vice president of international originals, told journalists in London in 2018 that he sees Thusi's Queen Sono "in the same category as other strong female characters like Claire Underwood in House of Cards and Jessica Jones in Jessica Jones."

Queen Sono may not be a real person, but she falls in line with the public's longstanding obsession with the spy fiction genre, which began to gain popularity with Erskine Childers’ 1903 The Riddle of the Sands, and soon became a pop culture mainstay thanks to Ian Fleming's James Bond books. (James Bond was apparently based off of World War II British secret agent Forest “Tommy” Yeo-Thomas, so we could say that Queen Sono is technically paying homage to Yeo-Thomas as well as Bond.) Bond pretty much dominates the spy fiction field, but Queen Sono is clearly just as much of an espionage hero as Bond is: she can be just as sensual and brutal as her predecessor, all while containing untold depths and juggling a shadowy past.

Unlike the male-dominated tales of Bond though, Queen Sono has one major advantage going for it: it gives viewers a perspective that they've rarely seen by showcasing a South African woman defending her own country. This sets Queen Sono apart from films like Kingsman and James Bond — very British stories that are wrapped up in the need to maintain the importance of Britain's monarchy and past colonization.

“James Bond is really an imperial throwback,” Matthew Parker, author of Goldeneye: Where Bond Was Born, told History.com. “He projects British power in all corners of the globe.”

Queen Sono, on the other hand, is an entirely new character who can still be as alluring and powerful as Bond, but in an all new and subversive context, divorced from those built-in British trappings.

Ultimately, Lediga is hoping that viewers take to Queen Sono as much as they do every other spy offering. “We are delighted to create this original series with Netflix, and are super excited by their undeniable ability to take this homegrown South African story to a global audience, Lediga said in 2018 in London, according to Deadline. "We believe Queen Sono will kick the door open for more awesome stories from this part of the world."

More like this
The First Clip From Netflix’s Queen Charlotte ‘Bridgerton’ Prequel
By Bustle Editors
'Elite' Season 6 Is Arriving Sooner Than You Think
By Gretchen Smail and Grace Wehniainen
What’s New On Netflix: Ana De Armas’ 'Blonde' & A Nick Kroll Special
By Arya Roshanian
Nicola Coughlan Shared A Lady Whistledown Excerpt From ‘Bridgerton’ Season 3
By Grace Wehniainen, Alyssa Lapid and Sam Ramsden
Get Even More From Bustle — Sign Up For The Newsletter