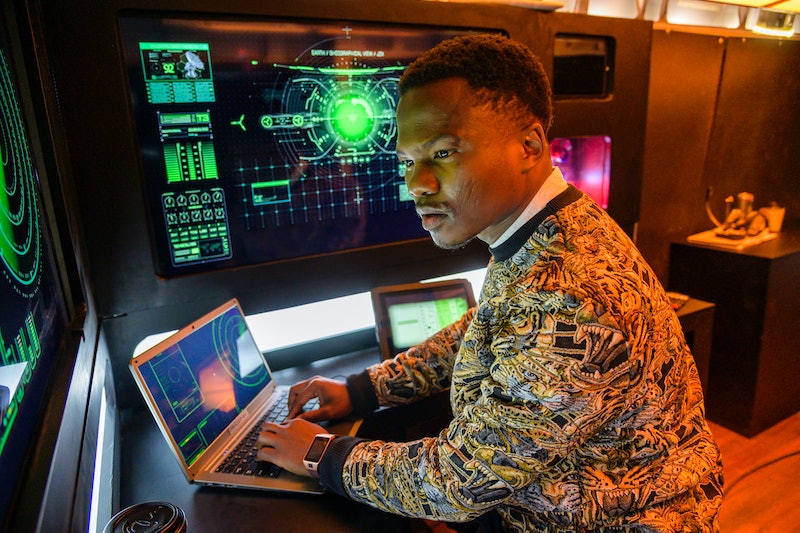 Netflix's first South African TV series, Queen Sono, is full of international espionage, epic fight scenes, and complicated family drama. Starring Quantico's Pearl Thusi as the eponymous Queen Sono, Queen Sono is not based on a true story, but the mere fact that she's a female spy can be viewed as a homage to the fictional characters and real life figures who came before her.

Per Entertainment Weekly, Queen Sono is a fun and fictional James Bond-esque romp created by Kagiso Lediga, the director behind the dark romance Catching Feelings. Queen Sono tells the story of super spy Queen Sono, one of the best agents South Africa has to offer, often because she's reckless enough to always get the job done. When the man who murdered her mother is let out of jail, Queen suddenly has to juggle her past familial trauma with her present day assignments — and the balance may end up being too much for her to handle.

Queen Sono doesn't seem to be based on the tale of any specific African agent. Instead, it seems like Lediga and the rest of the cast and crew are just interested in making a spy show that's both fun and authentically African.

"Controlling the narrative is really important because we’re tired of seeing, particularly, just struggle stories,” Thusi explained to Entertainment Weekly. “Because of the layers and the specific window people have chosen to look through to view the African continent, the same message is being sent over and over again. It’s been entertaining, I’m sure, and beautiful sometimes to see, but it has not been very empowering for African people.”

Queen Sono follows in the tradition of numerous other portrayals of female spies, from Sydney Bristow in Alias, Elizabeth Jennings in The Americans, Susan Cooper in Spy, Alex Parrish in Quantico, and Maggie Q's Nikita.

More like this
The First Clip From Netflix’s Queen Charlotte ‘Bridgerton’ Prequel
By Bustle Editors
'Firefly Lane' Season 2 Will Be The Show's Last — But There's A Twist
By K.W. Colyard and Grace Wehniainen
Twitter Is Pouring Out Some Zhampagne As ‘Schitt’s Creek’ Leaves Netflix
By Brad Witter
Jeffrey Dahmer’s Arresting Officer John Balcerzak Got His Job Back After Being Fired
By Grace Wehniainen
Get Even More From Bustle — Sign Up For The Newsletter