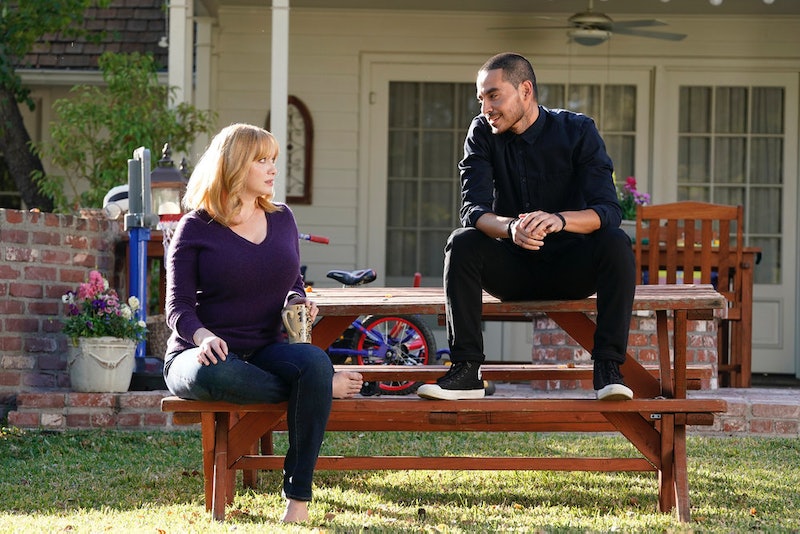 Spoilers ahead for the Good Girls Season 2 finale. Once again, Beth ended the Good Girls finale with a gun in her hands — only this time, she did actually pull the trigger. When Rio tried to make Beth shoot Agent Turner, she instead chose to shoot Rio. She hit him in the chest and he began bleeding out of his mouth, so it's not looking good for him. But is Rio really dead? At this point, Turner is his only hope.

After Beth shot Rio, she freed Turner, who told her to get out of there and that he would deal with this. Beth probably thought Turner would admit to shooting Rio as part of his investigation. She probably thought that saving Turner's life would be enough to get her off his radar for good. But she may have thought wrong. After Turner told Beth to go home, he offered Rio a lifeline. He'd call 911, but only if Rio agreed to owe him one. Viewers didn't get to see Rio make a decision, but he's a survivor. He likely would have taken the deal.

That's probably why Turner seemed so self-righteous and pleased when he visited Beth after the shooting. He told her he was going on vacation, but he also hinted that this wouldn't necessarily be the last time they saw each other. "Let's see how you do," he told her when she asked what he planned to do after vacation. For all intents and purposes, his investigation is over now that Boomer isn't actually dead and Turner's partner Noah is being relocated to Arizona. But Turner will most likely be back when he's ready to cash in on that favor from Rio.

Speaking of Rio, the crime boss may need some time to recuperate, but if he did take Turner's deal, he's going to be back soon. Expect him to come for Beth in Season 3. She's tried his patience a number of times over the course of the show, but trying to kill him? That's pretty unforgivable. The two have been pretty rocky the past few episodes with Rio telling Beth she was just a co-worker to him, and now Beth shooting him and stealing the business out from under him. Their relationship seems pretty much over — working or otherwise.

At the end of the finale, Beth started up the counterfeit business on her own. She told Annie and Ruby that they didn't need Rio to continue what they were doing. Because even though Beth and her friends very narrowly escaped prison this season, she literally cannot give it a rest.

The continuity of giving Beth a gun in both finales shows just how far she's come and where she's still not willing to go. In Season 1, she refused to shoot either Dean or Rio. In Season 2, she wouldn't shoot Turner, but she would shoot Rio. She's still good at heart and unable to shoot the "good" guys, but she's more comfortable shooting the "bad" guys. Perhaps in Season 3, she'll be OK with shooting anyone.

Fans will have to wait to see what happens next, but just know that it was awfully bold of Beth to trust Turner to take care of Rio and to think that she could just go back to committing crimes scot free. She probably should have quit while she was ahead, but then she wouldn't be Beth. And this is all going to come back to bite her in Season 3.

More like this
'Grey's Anatomy's New Intern Got Advice From Dr. Bailey Herself
By Grace Wehniainen
15 Piping Hot Behind-The-Scenes Secrets From 'Great British Bake Off'
By Emily Dixon and Darshita Goyal
Laenor’s Fate On House of the Dragon Differs from The Book In One Crucial Way
By Kadin Burnett
Rhaenyra's Sons May Not Last Much Longer On 'House Of The Dragon'
By Grace Wehniainen
Get Even More From Bustle — Sign Up For The Newsletter