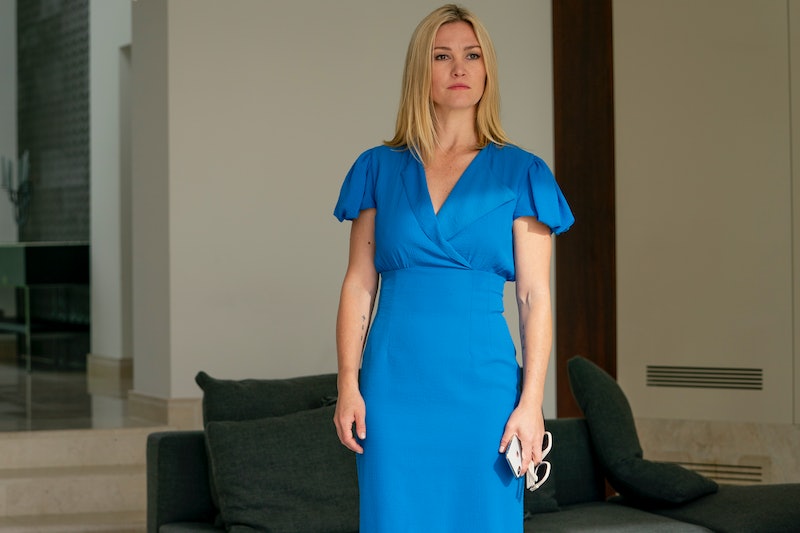 Sometimes I wonder what the rich have to argue about. Who forgot to put the wine back in the cellar? Whose yacht is better? Who accidentally bought economy class plane tickets? Well, as Sky Atlantic drama Riviera proves, the higher the wealth, the bigger the scandal — and there's plenty of bickering going on in this show, trust me. But is Riviera based on a true story? It all seems played out as though the show really is realer than fiction, and I want to find out more about the dramas rich people on the French Riviera get themselves into.

While the show — which follows the second wife of a banker (Julia Stiles) after he mysteriously dies in a boat explosion — doesn't necessarily depict real, lived events, the way in which Riviera came into existence is quite the story. According to a GQ article from June 22, 2017, U2's former manager Paul McGuiness actually planted the seed idea for the show.

Having spent another one of his summers sunning himself on the French Riviera, McGuiness thought to himself: "Anyone in the world who starts to make a large amount of money, be it legitimately or illegitimately, tends to come to the South of France to spend it," as he told GQ. Adding, with a good amount of foresight, "[i]t creates an incredibly fertile environment for a story."

U2's former manager came into contact — and yes, this is all really, really random — with Neil Jordan, the writer of popular '90s films The Crying Game and Interview With The Vampire, when he put out a call for writers to pitch him a story with element of the Riviera — "[g]lamour, wealth, family and crime" — in mind. Jordan's was clearly the favourite.

So, while all the action you'll see unfold when series two of Riviera rolls back around onto Sky Atlantic on Thursday, May 23, is a product of a couple of writers' Riviera-based daydreams, I reckon that there must be some truth to their depictions of rich people and their scandals, right? And of course, McGuinness and Jordan aren't the first to base their stories here.

The sun and shade of the French Riviera can be seen in the work of many authors, including Robert Louis Stevenson, Anton Chekhov, and Katherine Mansfield, the BBC's Culture page wrote on Oct. 21, 2014. And, like McGuinness, these authors all took inspiration for their masterpieces while being sunned by the French rays. Plus, it's really not a bad setting for a scandal, since the Riviera "has long-running links to the mafia and organised crime," according to a Culture Trip article from Jul. 30, 2017.

So, with all that history behind it — both real and literary — the French Riviera already comes steeped in mystery and myth, and McGuinness' show ekes that all out for everything it's worth. That boat explosion might be fictional, but who knows what could happen on one of the world's most premium coasts? Let's hope that life doesn't imitate art.