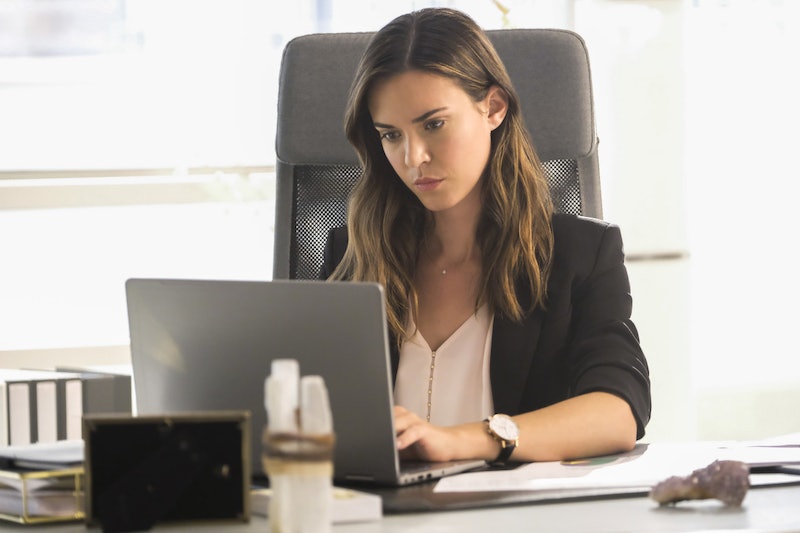 In the first three episodes of Supergirl season 3, with the exception of Supergirl herself, there has been no character that has gotten as much screen time as Samantha Arias. But why is this new character getting all this attention? Is Samantha from Supergirl in the comics? She's not the focus of this season for nothing.

Samantha, played by Odette Annable, is a single mother of a middle-school-aged little girl: Ruby, and for all current intents and purposes is pretty much a non-threat. We know she loves her daughter very much and has a pretty intense job. (As Lena Luthor focuses her attention on her newly acquired CatCo Magazine, Samantha will be taking over Luthor’s former job as acting CEO of L-Corp.)

But, while that's all well and good, some fans may be scratching their heads in confusion. Surely, a character so heavily featured in the show must have something more to her story — some connection to Supergirl or looming villainous intentions, perhaps? For those of you thinking that, you’re right. As I’ve previously reported, Samantha is set to become this season’s big bad.

You see, Samantha may not be in the comics, but her soon to appear alter-ego Reign certainly is. Reign, at least in the comics, is a biological weapon known as a Worldkiller, created by none other than Supergirl’s father Zor-El. She is one of several of these genetically modified aliens designed to be living weapons of mass destruction. Reign, known for her skill with a sword, also has a number of superpowers including superhuman strength, speed, and stamina.

Even if you hadn’t heard the news that Annable’s character was going to become a villain, it’s clear something is askew. In the first episode of the season, for example, she displayed superhuman strength to save her daughter who was pinned under a steel bar — lifting it off of her with relative ease.

So, when can we expect Samantha to make the full transformation into Reign? Well, as I pointed out in another Bustle article, she could get her introduction as early as Episode 7, since Supergirl executive producer Andrew Kreisberg told Entertainment Weekly that it’s typical for these types of superhero shows to introduce the villain between Episodes 7 and 9.

While we don’t have the synopsis for Episode 7, we do have the title: “Wake Up.” Set to be directed by Chad Lowe, that title seems to reference Samantha’s nightmare in the season premiere. In that episode, Samantha woke up in a cold sweat when she saw had a dream of a woman in a field turning to reveal a monstrous face.

The woman whom Samantha saw in her dream is Kara’s mother, Alura; although, she certainly doesn’t always have that demonic look. What that face is reminiscent of, however, is Reign from the comics. And, although it was Kara’s father Zor-El who created her in the comics, perhaps the creators of the show simply tweaked that detail. Perhaps it was actually Kara’s mother who created Reign in the show’s own version of events. The show has already stepped outside the comics version of events by creating Samantha as a character in the first place, who's to say the series won't deviate in other ways?

So many questions remain to be answered: When will Reign appear, will Samantha cease to exist, did Alura create Reign, and many more. With so much left to learn, Supergirl certainly has viewers’ attention. And, while some may be hoping for Reign to hurry up and show her face, her debut will come only when the time is right. For now, we’ll have to stick with Samantha and see where her story leads.