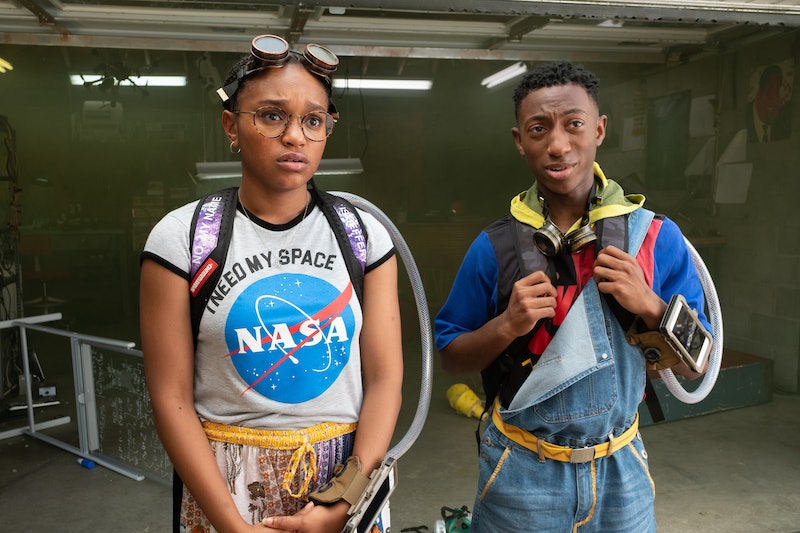 The new Netflix movie See You Yesterday, streaming on May 17, hints at its time travel hook in the title, but its real focus is more social issue than sci-fi. Friends C.J. (Eden Duncan-Smith) and Sebastian (Dante Crichlow) obsessively tinker with their latest invention — time traveling backpacks — between attending their magnet school in the Bronx and traveling back home to Brooklyn. When C.J.'s older brother is shot by police, she's determined to use science to change his fate. The time-travel is balanced by neighborhood slice-of-life, but is See You Yesterday based on anything specific? Unfortunately, it wasn't a YA novel, but rather the recent spate of police brutality directly inspired the film.

Holding nothing but a cell phone, C.J.'s older brother Calvin is gunned down in the street by police. C.J.'s repeated attempts to go back and change events form the bulk of the film, but she soon realizes the darker truth that for people like her and her brother, all that will change is the victim, not the action.

In an Okay Player interview, director Stefon Bristol explained that the film was originally quite different. Writing the first draft during 2014, time travel was still there, but the motivation was a young man trying to stop his grandfather's drunk driving from killing his best friend. "The murder of Mike Brown and Eric Garner changed that," Bristol explained. "It’s an incredibly unfavorable influence on a piece of art."

Fortunately there were happier influences on the story, though at first Bristol didn't recognize them as part of his own style. Talking to IndieWire, Bristol said his first film at NYU was a jumble of hood clichés he'd gleaned from films such as Boyz n the Hood and Menace II Society. Spike Lee was his professor at the time, and criticized the film, telling Bristol he needed to do something original. Though the criticism moved Bristol to tears, it also made him think hard about what stories he did want to tell. “I grew up in the hood. I grew up with other brilliant young black people who are geeks, who are into anime, who are into stem research, who are not into rapping or playing sports," he said. "You tend to recreate something that is already there, and I was creating something that I’m not. I was perpetuating that, and Spike didn’t appreciate that.”

That was the push Bristol needed to create the original short film version of See You Yesterday. Talking to Shadow and Act, Bristol said he's glad he was able to turn his short into a feature (produced by none other than Spike Lee), because it gave him breathing room to add more of his happier lived experience to an intense story. "In a short film... you don't have time to indulge in the world of the characters. You have no time to indulge in their spaces. For the feature, we had time to luxuriate in that. There's the cook-out, the bodega, all that. That’s just my life. I just poured it on the page because I know that like the back of my hand. That was easy to write."

See You Yesterday shows the lighter and darker sides of that life, harsh truths next to loving families and bustling neighborhoods. The film screened recently at New York's Tribeca Film Festival, and will be available to stream on Netflix this Friday.