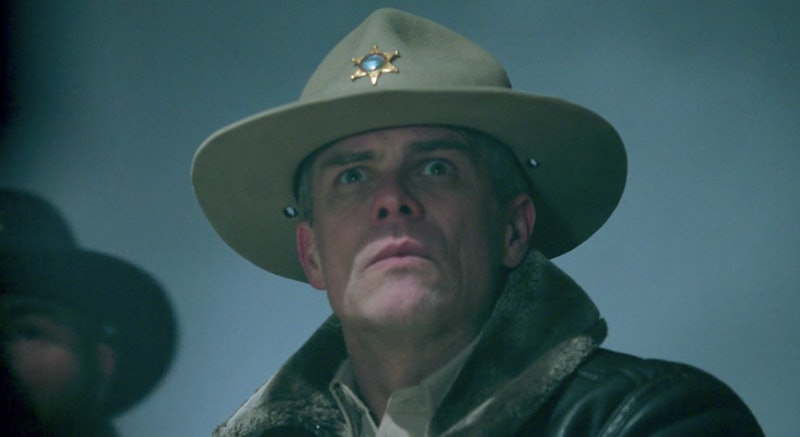 At the end of its first season, Riverdale proved that it's unique among whodunit series by actually solving the central mystery. By the finale, the audience knew who killed Jason Blossom and how his family's secret is just one small way in which the town of Riverdale is a lot darker than it appears on the surface. Could Sheriff Keller be under the black hood in Riverdale Season 2? Another mystery has emerged, and there are a lot of fan theories circling around the attacks on Fred Andrews and Ms Grundy. After the revelation that Jason Blossom was shot by his own heroin-dealing father, no one should be automatically ruled out of the masked assassin investigation — not even the man running it.

Because while Sheriff Keller, Kevin's father and the person Riverdale citizens rely on to protect them, may seem like he'd never attack someone like Fred, he's exposed his own biases before, especially when the Serpents are involved. And throughout Season 1, Fred's business helped give some of FP's friends a job. He became wrapped up in Hiram Lodge's schemes, making him a target to both other criminals and lawmen alike.

There's some pretty compelling evidence in both directions, and many other Riverdale residents will be suspects before the mask is pulled off. But here are some of the clues that have been dropped so far:

He Doesn't Have Those Distinctive Green Eyes

Sheriff Keller has light eyes, but not the incredibly specific dark green ones that are now burned into Archie's memories. And given that Sheriff Keller was the one running the lineup of suspects when Archie had his intense flashback to what the man's eyes looked like, he had a perfect opportunity to compare his memory to the man in front of him.

But Otherwise, He Matches The Physical Profile

The man in the black hood is clearly an older, white man of average height and build, with dark but possibly graying eyebrows and the ability to use a gun. All of those things apply to Sheriff Keller, so if Archie just failed to look up and notice his murderous stare, he could be the culprit.

In the Archie Comics, there's a character called the Black Hood who looks very similar to the masked killer on the show, right down to the diamond-shaped eye holes cut into his mask. In the comics, the Black Hood is Richard Kipling Burland, a vigilante who fights crime dating back to the 1940s. But this version looks almost exactly like the Dark Circle Comics version of the character, which is a little darker and edgier... just like Riverdale.

Riverdale hasn't yet shown where any of the townspeople besides Fred, Archie, and Pops were during the attack. While there were other scenes intercut with Fred and Archie's trip to the diner, there wasn't so much as a hint as to where Sheriff Keller was during the incident. And when Pops called the police, the sheriff didn't arrive before Archie took Fred to the hospital.

He Hates The Serpents

If there's anyone in Riverdale who would want to blame the Serpents for Fred's murder, it's definitely the sheriff, who recently lost out on busting the entire crew for dealing the Blossom family heroin when FP Jones refused to snitch on his comrades. The sheriff might not have access to a real Serpent jacket, but the killer certainly was trying to emulate their signature style. Framing the Serpents in order to hunt them down would be a sneaky, underhanded, and kind of understandable move.

It Would Fit Perfectly Into Riverdale's Dark History

In Season 1 of Riverdale, it was revealed that the town's wealthy, seemingly perfect family was filled with dark secrets. Perhaps the second season will reveal that "justice" isn't quite so fair in the town either. If the sheriff is the one behind this attempted murder, it would fit the show's usual theme of not trusting institutions in this complicated town.

The evidence suggesting that Sheriff Keller is the masked man who attacked Fred Andrews is slim. But there are a few compelling reasons why it might actually make perfect sense. So Riverdale fans who are obsessed with this theory may turn out to be totally right.

More like this
Paul Mescal, Man Of Mystery
By Samantha Leach and Heather Hazzan
Mike Flanagan Teases 'The Midnight Club' In This Exclusive, Creepy Clip
By Grace Wehniainen
'The Rings Of Power' Episode 6 May Reveal Sauron’s Identity
By Grace Wehniainen
Caleb McLaughlin Details Racism From 'Stranger Things' Fans
By Radhika Menon
Get Even More From Bustle — Sign Up For The Newsletter