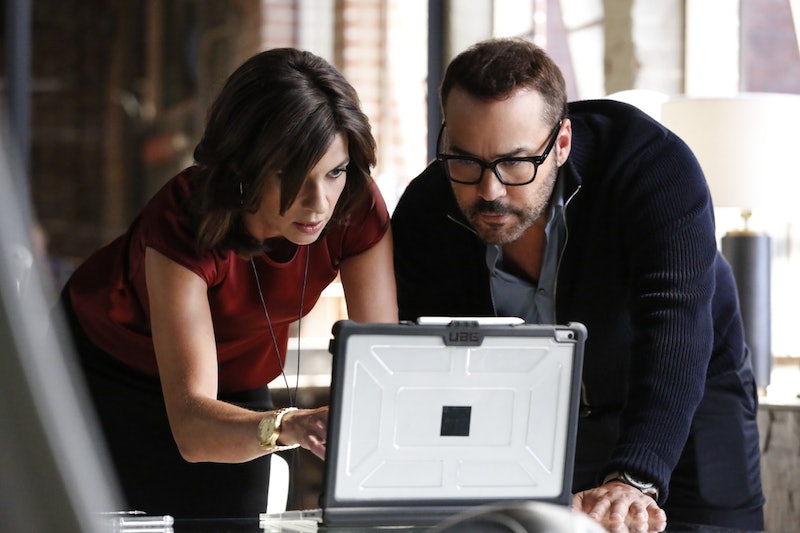 Imagine that someone's daughter was murdered. Now imagine that someone who lost their daughter is also a technology titan with all of the intellect, power, and millions of Steve Jobs. Put those two things together and bam! You've got the plot of CBS' new show, Wisdom of the Crowd. This crime drama answers the question, what would happen if an internet platform was created to crowdsource information and evidence about a crime? This platform, called SOPHE, is innovative, yet also frightening, and it might have fans wondering if SOPHE from Wisdom of the Crowd is a real platform.

Unless you're talking about the Society of Public Health Education, SOPHE is purely a fictional invention. Basically, the fictional tech entrepreneur Jeffrey Tanner (Jeremy Piven) created a kind of Twitter for crime-solving, SOPHE, where people could post any evidence or information they have relating to the murder of Tanner's daughter. Conversely, Tanner and his team can post requests for certain information, or to locate a suspect. The idea is that if you get enough people working together to solve something, eventually someone will provide information or come up with a theory that proves correct. It's crime-fighting crowdsourcing.

But just because SOPHE isn't an existing platform doesn't mean it doesn't draw inspiration from real life. Wisdom of the Crowd by no means invented the idea of crowdsourced detective work. The recent upsurge in interest in true crime and the existence of social media has resulted in the creation of a community of internet sleuths. Whether it's on blogs, Reddit threads, or Facebook groups, people all over the country are doing the same kind of work that those using SOPHE do — they discuss theories, provide alleged evidence, get in touch with witnesses and family members, and try to solve crimes.

In fact, there's even a centralized site dedicated to this kind of amateur sleuthing activity that could be a nascent version of SOPHE. Called WebSleuths, the site features a multitude of forums dedicated to solving different cold or open cases. Activity on this site and Reddit have even led to some successes, such as in the case of "Grateful Doe," according to The Washington Post. An unidentified man who died in a car crash on the way to a Grateful Dead concert was dubbed "Grateful Doe" and remained so for 20 years before internet sleuths solved the case, and identified the man as 19-year-old Jason Callahan. So the premise of SOPHE isn't really that far-fetched.

Yet, the idea of SOPHE might bring up some questions about surveillance and the power of a mob mentality that might have benevolent intentions, but could have some sinister consequences. In the preview for the new series, we see a crowd of SOPHE users following and filming a murder suspect. Eventually they form a crowd around him, restricting his movement and recording his actions. Things like this could set a dangerous precedent for the future in the series. What if a suspect is actually innocent, but the users of SOPHE believe he's guilty? What if they follow this innocent person, claim that he's a murderer all over the internet, and make his life miserable by constantly following and filming him? What if a ill-intentioned person used the platform for their own agenda or revenge plot? One could see how easily SOPHE could be turned from a tool for criminal justice to a tool for revenge, or for increased surveillance on innocent parties.

It's unclear whether the show will tackle some of the problems of SOPHE over the course of the season, but it sure seems like it's going to be a fascinating and unique addition to your usual fall lineup of fall crime shows.