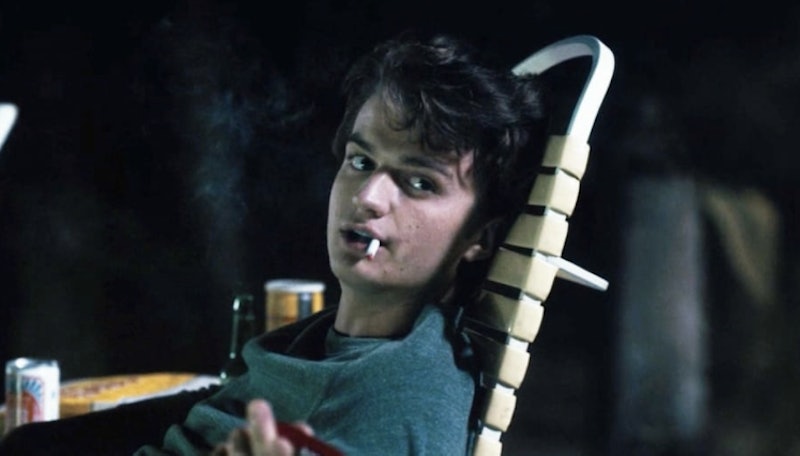 Stranger Things returned to Netflix with a brand new season on Oct. 27 and finally solved Season 1's biggest mystery. No, not the mystery of the Upside Down, or whether Hopper and Joyce are OTP, but the secret behind Steve Harrington’s hair: Turns out it's just Farrah Spray. Even better, is the fact that Steve's Farrah (hair) Spray is very real. And like much of the things we see on Stranger Things — it's pretty '80s specific.

Farrah haircare products, according to the National Museum of American History, were produced by Faberge Inc. and the line's shampoos and conditioners bore hair icon Farrah Fawcett's name and likeness from the late 1970s through the mid '80s. Since the series takes place in the early 80’s (Season 1 in 1983, Season 2 in 1984), Steve's choice of coif-keeper is extremely on point. But for those who hope to pull of a Steve 'do, I'm sad to say Farrah Spray is no longer being produced. Of course, you can always try your luck with vintage hair goop: there are bottles available on Ebay.

For those who need a refresher, Steve Harrington is one of the more popular guys at Hawkins High, beau of Will's sister, Nancy Wheeler. Early in the season he came off as a mean dude, hanging out with bullies and acting jealous about Jonathan Byers spending time with Nancy (he was convinced she was cheating — she was not). But the real thing everyone remembers about Steve is the hair. And as it turns out, when it comes to Steve, the mystery hair is actually the biggest part of making Steve seem like, well, a jerk.

According to a Refinery29 with Sarah Hindsgaul, the Stranger Things hairstylist, it turns out that Steve actor Joe Keery was one of the few stars who didn't wear wigs — which meant a lot of work for the hair team. "It was a proud project that happened there — big and blow-dried back with that kind of obnoxious piece hanging down," she said. "We spent a lot of time discussing what he should look like, so he really rubs people the wrong way; to make him look like kind of a douche.”

But despite being asked about his hair often, Keery doesn't seem to have much to say — so until Season 2 revealed his hair care routine, the 'do was a giant mystery.

In real life, it turns out that Keery may not even need the extinct Farrah Spray — he maintains that he’s had that long hair his whole life and that he doesn't even put anything in his coif. In an interview with Hollywood Today he attributed his luscious head of hair to good genes. “My mom has really thick hair, and my Dad has really poofy hair,” he said. “So, my scalp is I guess is the perfect storm.” And in an interview with Entertainment Tonight, he said that in real life, he doesn’t do much of anything to get his hair to look that way. “People aren’t going to believe me, but I don’t use product, actually,” he said. “I just shampoo it like the rest of you."

At the same time, he has said that it does take some effort to get his hair “show-ready," versus real life ready. In a different interview with Entertainment Tonight he explained that it took time to get the process right. “We got it down to I think, 30 minutes actually, towards the end. It was good,” he said. “It was a lot of shampoo, and then we would blow dry it out and then hairspray it back and then they had to get the little curl going. It took kind of a while.”

So, while that huge monster coming out of the sky in Season 2 has looks quite terrifying, something potentially even scarier looms. What if Steve loses his luscious locks like Eleven did last season? I shudder at the thought. But while Farrah Spray may be no more, I'm pretty Steve's hair is here to stay.

More like this
The Best 'Grey's Anatomy' Intern Moments, From MAGIC to Glasses
By Grace Wehniainen
Shonda Rhimes' Net Worth Makes Her One Of The Wealthiest People In TV History
By Hugh McIntyre
'The Rings Of Power' Episode 7 Will Feature An “Unlikely Pairing Of Characters”
By Grace Wehniainen
'Firefly Lane' Season 2 Will Be The Show's Last — But There's A Twist
By K.W. Colyard and Grace Wehniainen
Get Even More From Bustle — Sign Up For The Newsletter